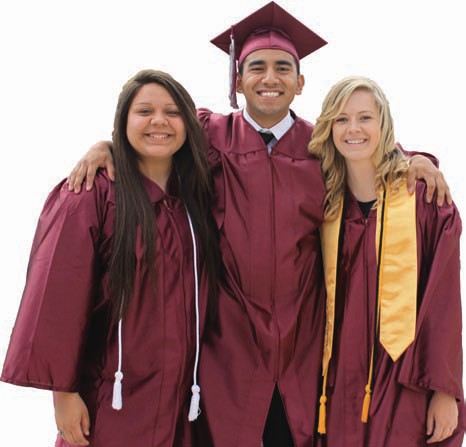 Seniors Nisa New, Daniel Campos, and Marissa Minyard pose for a photo after graduating on Thursday.

Last Thursday, 49 Southeastern High School students did what no other student before them had ever done: they graduated… as Southeastern students.

For the first time ever, Southeastern has a graduating class, and the class of 2015 is proud to be the trend setters for generations to come.

“We are setting the bar for everyone else, and we are setting it high,” said senior Daniel Campos.“Twenty years from now when this class is forgotten, I still feel like that bar will remain.”

The class first got the news they would be the first graduating class when they were only seventh-graders, but they still weren’t convinced it would actually happen.

“It just didn’t feel real,” says senior Nisa New, who has been at Southeastern since she was a kindergartner.

The class before them had also been told they would be the first graduating class, but unfortunately that plan was unsuccessful.

“You wouldn’t believe how disappointed they were,” says kindergarten teacher Ramona Blocker.“We’ve had many students, including my two girls, who are so jealous of the class of 2015 because they were able to remain at Southeastern.”

Many graduating students had Blocker, who has been at Southeastern for 25 years, as their kindergarten teacher.

“It’s unbelievable,” she says.“We feel like we’ve had a part in this. We are a family unit, and everyone supports everyone. There were some tears shed Thursday night.”

Blocker says she continually tells all her students from years past they will always be a representative of Southeastern and each teacher at the school.

“We have the greatest students on earth,” says high school science teacher Rhonda Lindley.“We know them all on a personal level, and these kids are amazing. I recently handed out a personal questionnaire and many people wouldn’t understand the depth of the issues these kids have been through, and so you wonder why are they here. It’s because of the community, family members, teachers, and staff coming together to help these kids because we believe in them.”

Going into graduation night, the same feeling was expressed by both students and teacher – nervousness.

“It’s just because it’s the first one,” Campos said.“We’ve never seen a graduation done here before so we don’t have anything to go on.”

But, if the past has shown one thing it is how resilient the students and staff at Southeastern have been whether that be academically or athletically.

“We’ve made nothing but progress in both areas,” Lindley said.“We keep having the first of firsts, and now we are winning games and seeing our students make 30 on the ACT. The sky is the limit now.”