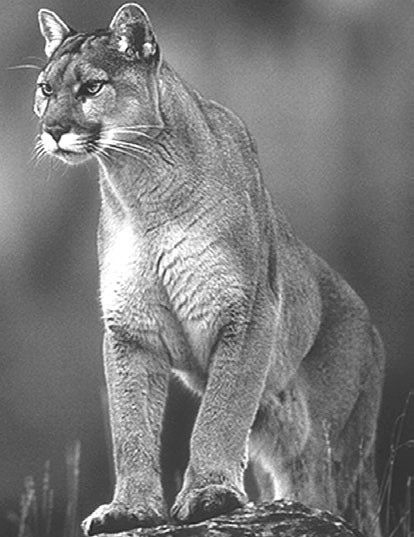 There is nothing more likely to get the stories rolling than a report of a mountain lion- or bear-sighting in Blount County. Stories of mountain lion- and bear-sightings have been told at coffee shops, church, family get-togethers, and at dinner tables for as long as I can remember.


Most recent reports have been of a mountain lion spotted in the areas arond Allgood, Limestone Springs, Pine Mountain, and as far south as Remlap. Some of these sightings have come from residents known to be reputable people.

When I was asked to look into and write on this subject, I thought it would be an open- and shut-case. Well it turned out not to be so open and shut. Here’s what I found.

First let’s take a look at the animal itself so that we all know what we are looking at, if we do see one. The mountain lion has many names, among them cougar, panther, puma, and catamount. It is the second largest cat in North America behind the jaguar, found primarily in Mexico and Central and South America with a small population in the extreme southwestern U.S.

The cougar is usually light brown or tawny in color but may be shades of red or brown. Cougars range in size from 75 pounds to over 200 pounds, and a big male can be nine feet long.

The cougar at one time had the largest territory of any terrestrial mammal, including all of Alabama. By the end of the 1800s, a confirmed cougar sighting east of the Mississippi River was rare. According to the Alabama Department of conservation and Natural Resources there was no longer a viable population in Alabama as early as the mid-1800s.

The self-sustaining breeding population closest to Alabama is in south Florida and is very isolated in a large uninhabited swampy area. This population is a subspecies and is referred to as the Florida panther. This is the cougar that occupied most of Alabama with a small population of the eastern subspecies in north Alabama. With no known cougars in Alabama since the mid 1800s, the case should be closed. Right? Not so fast! Let’s look a little closer.

With all mountain lions gone from the state by the mid 1800s, it seems very unlikely that a hunter would harvest one. But that’s just what happened in 1948, and it was killed in St. Clair County, just next door. Another thing that struck me was the use of words like “unlikely” to describe the changes of seeing a cougar in Alabama. If it was “unlikely,” then it was at least possible. Right?! Another thing, if there aren’t any, why are they listed as protected by Alabama Fish and Game.

Well, I started this project convinced there were no wild cougars in Blount County or Alabama and that any sighting was either that of mistaken identity or of a released or escaped pet. With no known trail-cam photos or pictures of a cougar taken anywhere in the state, I believe this is still the most likely explanation. I’m just no longer 100 percent sure.

What about the bears? We will look at bears more closely at another time. But I will say that my answer to that question may be a real surprise to some. If you or someone you know is lucky enough to get a picture of a cougar or bear in Blount County, be sure to report it to the Alabama Department of Conservation and Natural Resources.