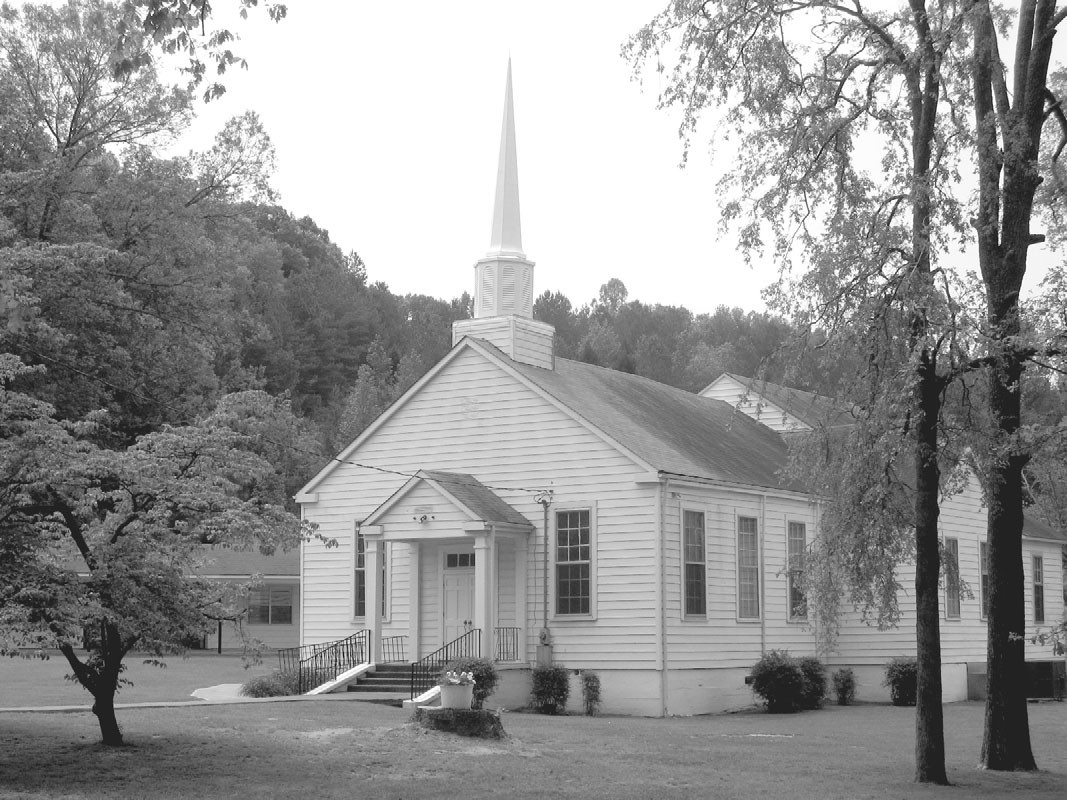 the following history in anticipation

of the celebration of Mount Tabor
Baptist Church’s 200th anniversary.

and pastors and the public to the
special service Sunday, June 13, at 11 a.m.
and to dinner following in the fellowship
hall. The historic structure is four miles
southwest of Blountsville on county road
26.

Weaver gives these as references for the
history:

Notes of Miss Opal Adams prepared for
a meeting of the Blount County Historical
Society at the church Oct. 30, 1966.

Rev. Hosea Holcombe, A History of the
Rise and Progress of The Baptists of
Alabama 1840.

The Church of United Baptists at Mount Tabor, as it was originally called, began its long history of 200 years of service to the spiritual needs of the people of the Gum Springs community in the homes of the earliest pioneer settlers.

According to the notes of Opal Adams, a descendant of an early pioneer family, the founding date for the church is 1810. She hosted a Blount County Historical Society meeting at the church in 1966 and spoke on its history. These notes are in the possession of the church clerk. Records of the State Baptist Archives at Samford University can not prove this date but it has for many years been accepted and used by the church members even if it is nothing more than folklore. Various dates have been given for the founding of the church from 1810 to 1825 but as there are no definitive records the date of 1810 has long been recognized and used by the Church.

By 1819, the church was meeting in the home of John Fowler. Mr. Fowler came to this beautiful valley from Tennessee in territorial days before any county or state government had been established. A prosperous farmer, he introduced successful apple orchards to this area, and the valley became known as Fowlers’ Cove. Later a church building was built but a deed to it was not written by Mr. Fowler until 1847 and the cemetery until 1849. By that time they had been in use for years. The date of the first church structure and first cemetery burial can not be established as no early church records have survived.

The deed to the church reads in part:

The deed to the cemetery reads:

In consideration of the propriety of
establishing permanently a burial
ground….one acre of land….commencing
at a stone set in the ground marked with
the letters P.B.G. …. to the Church of the
United Baptists at Mount Tabor. February
21, 1849.

The first church building was of logs with a floor of split poplar logs buried in the earth flat side up. The seats were split poplar logs with pegs for legs. Mr. John Bullard in 1966 provided Opal Adams with a description and drawing of the first church house. The logs were later weather boarded and the length was extended. Inside the men sat on the right and the women on the left and the “most devout” sat in the “Amen” section up front. In 1829 the membership was 30, 1836 it was 47, 1870 it was 72 and by 1900 it was 95. Records reveal Mount Tabor was a member of Mt. Zion Baptist Association 1841, Muscle Shoals Baptist Association 1844, Warrior River Baptist Association 1859. (Now known as Blount Baptist Association.) A second church was constructed 30 yards from this original building as the membership continued to grow. Paintings of these early church buildings by Opal Adams are displayed in the vestibule of the church.

December 27, 1905 a deed for a roadway was given to the Deacons of Mount Tabor Baptist Church by Brittain Fulton Warren and on January 3, 1906 by William F. Chamblee. Shortly after this time the Church burned and all its records with it. For several years the Church met in the Gum Springs Academy schoolhouse that was located across the Cox road from the present church next to Dr. W.K. Clapp’s house. Around 1915 a church was built by Burg Moore, a carpenter from Gadsden, on the present site on lands given by Newton Jasper Chamblee and Brittain Fulton Warren. This location was chosen as it was more accessible to the main road, highway 26. The cemetery has continued until today at its original location. In 1945 this building burned, the wooden roof shingles catching fire from cinders from the chimney flue. Victoria Warren, hearing timbers cracking overhead in the attic, stood up in the middle of the worship service and exclaimed “the building is on fire.” Nothing was saved but the carved wood serpentine chair still used in the sanctuary and the wood lecturn used now in the fellowship hall.

From 1945 until 1948 the congregation met next door in the old Alexander Chamblee house, then owned by B.F. Warren. By this time the old schoolhouse had been torn down and could no longer offer refuge. By 1948 Eugene Reid and Loyd Byrum completed the beautiful building still used by the congregation today.

The activity building was added in 1960 with Sunday school rooms added in 1970 and 1981. The steeple was replaced in 1981 and the parking lot was paved in 1984. Mount Tabor after 200 years continues to faithfully serve its community and from it other churches have sprung. Today a member of the Friendship Association, no church can be prouder of its history or no more certain of its future.