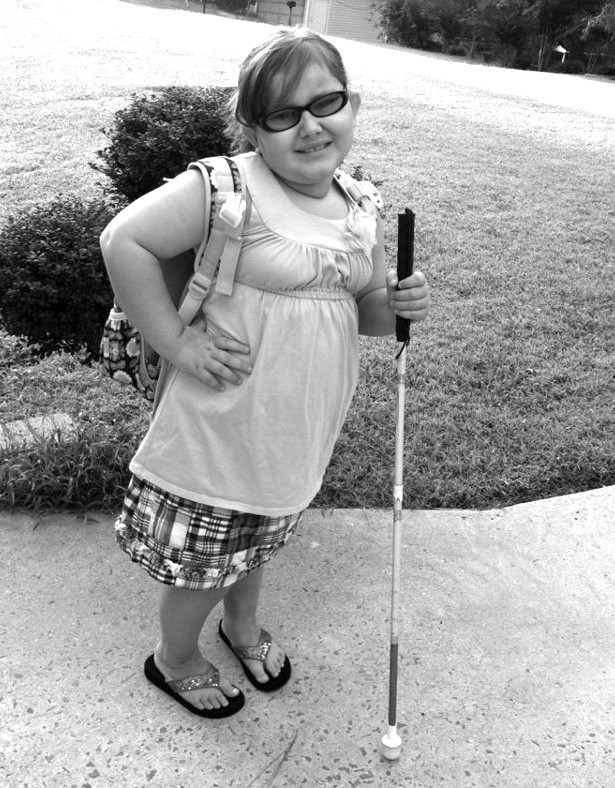 Brooklyn Jenkins is an Alstrom Syndrome patient and wishes to visit a conference in Massachusetts this year.

Contrary to popular belief, sometimes researching medical symptoms on the Internet can lead to a correct diagnosis. Cayla Atwell will attest to this.

At seven weeks old, her daughter Brooklyn Jenkins was rushed to the hospital when she stopped breathing during a church gathering. The doctors believed she must have had an allergic reaction.

However, while at the hospital, Brooklyn went limp in her mother’s arms and her vital organs began to fail. That’s when the doctors knew something else was happening.

Throughout that year, Brooklyn was diagnosed with dilated cardiomyopathy and nystagmus, a condition that causes shaking of the eyes.

“I felt like the two symptoms were related,” Atwell said.

The concerned mother then went on a hunt to find out just what could be wrong with her daughter. Initially, after typing Brooklyn’s symptoms into an Internet search engine, the name Alstrom Syndrome appeared. After reading the problems that accompany the syndrome – blindness, hearing impairment, diabetes, short stature, and a limited lifespan – Atwell threw out the possibility and refused to label her daughter with such an awful outlook.

But, by the time Brooklyn was three, Atwell decided once again to type her daughter’s symptoms, and for the second time, Alstrom popped up. With the additional confirmation, Atwell began to really pursue the possibility of Brooklyn having Alstrom syndrome. She sent Alstrom Syndrome International (ASI), a lab in Maine, Brooklyn’s blood samples.

Normally, according to Atwell, test results for an Alstrom diagnosis can take anywhere between six weeks to six years with a medical diagnosis because ASI must find two separate mutations.

It didn’t take Brooklyn and her family long to hear back from ASI.

Within that six-week time frame, the lab contacted Atwell to tell her they had found both mutations, and Brooklyn did have Alstrom Syndrome, a genetic disease so rare only 800 people worldwide have been diagnosed. According to Atwell, no UAB genetic doctor who had seen Brooklyn had ever even heard of the disease, and she is the only medicallydiagnosed Alstrom patient in Alabama.

Now, Brooklyn is 8 years old, and the progressive disease has affected her in many of ways. She is legally blind, hearing impaired, and prediabetic. Her heart is in better condition, but she has current problems with her kidney and liver.

Although no cure exists for Alstrom Syndrome, work is being conducted at ASI to give families affected by the disease hope. However, because Alstrom is so rare, ASI receives no federal funding which leaves fundraisers with the task of keeping ASI afloat.

Other avenues of hope include a family and medical conference, hosted by ASI, on Alstrom Syndrome that is conducted every three years in cities across the country.

This year, the conference is in Plymouth, Mass., which has caused Brooklyn’s family to begin looking for a way to be able to visit.Brooklyn and her family have been participating in fundraisers since 2009, and this year they will participate once again with hopes of raising at least $2,000 to cover their trip to the conference. Atwell says they wish to raise more so they can donate the rest of the proceeds to ASI.

On April 27, the first-ever Alstrom Angels Benefit Motorcycle Ride in honor of Brooklyn Jenkins and Alstrom Syndrome International will be held. The ride will leave from Lakeside Park, where all riders register for $20 per bike, in Pell City at 3 p.m. and head to Palisades Park where there will be live entertainment, a live auction, a live raffle, and refreshments.

Atwell says they are looking to make the motorcycle ride an annual event.

The motorcycle ride idea came from Atwell’s friends, Ray and Michelle Blackmon, who frequently ride their motorcycles in other fundraising events.

When Atwell agreed to the idea, the Blackmons began handing out flyers and spreading the word at the motorcycle rides they attended. During this time, Atwell contacted her friend in Texas that created Alstrom Angels, a fundraising group for ASI which not only raises money for Alstrom Syndrome but also provides family support and offers education on the disease.

Brooklyn’s family will also be traveling to Maryland to the National Institute of Health on April 28 to attend an allexpenses paid trip for a cilia study. Cilia are small hairs, for instance in a person’s ear, that works to keep out dirt so it doesn’t enter the body. However, it has recently been discovered that cilia in an Alstrom patient’s body will have one cilia pushing away while one pulls in.

Basically bringing some of the bad stuff into the body, Atwell explained.

Brooklyn will participate in the studies and will get her test results for free.

Atwell says she feels it is her family’s mission to inform people about Alstrom Syndrome. It is a genetic syndrome, but no carrier tests are being performed yet. Atwell said many people don’t know their child has Alstrom because one of the first symptoms it causes is dilated cardiomyopathy and a lot of children die from it. She warns if a close family member has had this happen to one of their children, there is a possibility the Alstrom Syndrome carrier is in your family.