Mother of rare triplets is home 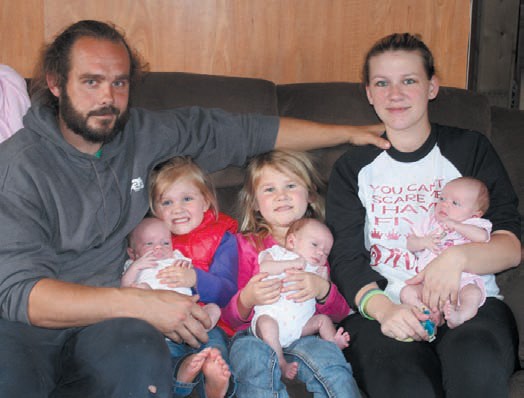 With three identical pink bundles in hand, Amber Ertley finally returned home on March 7, after enduring a few life-threatening moments and an extended hospital stay. Ertley, 24, and Levi Nelson already shared two beautiful daughters together: 5-year-old Lilly and 2-year-old Josey. They thought they were finished having children until they received the news that Ertley was pregnant again – this time with triplets.

Ertley was healthy throughout her pregnancy until the end when she began showing signs of pre-eclampsia. On Feb. 15, at 34 weeks pregnant, she was admitted to UAB Women & Infants Center. Five days later, she went into labor and was prepped for a C-section.

All was well during the procedure until the third baby was born. Nelson, who had been by her side, alerted hospital staff that she appeared to be seizing.“Everything happened so quickly. She was doing great, and then it was like she just lost consciousness. I heard,‘Code Blue,’ everyone went from walking to running to her room. I didn’t know what was happening, but I knew it wasn’t good. So many thoughts rushed through my head. I was terrified.” Hours passed before Nelson heard any news of her condition.

Ertley has been on a long, rough recovery after losing a lot of blood. She finally left the hospital in early March, but was readmitted to UAB after another episode of bleeding, four days later. She has remained home since being discharged on March 7, thanks to the assistance of her family.

Rare, identical triplets Rylan, Remi and Norah were born healthy, weighing more than 4 pounds at birth. Baby Norah was the only of the three that had to stay a few extra days in the hospital due to low heart rate, but otherwise the babies are very healthy, especially considering the trauma their mother had undergone.

Ertley employs the support of her mother in-law and sister-in-law to help out with the girls while she goes to her doctors’ appointments three to four times each week. With the new mother still healing, Nelson has also had to take on extra duties and stay at home to take care of the children. Friends and neighbors have helped the family by supplying them with diapers, food, and formula. The family also has a GoFundMe page set up for monetary donations for medical expenses and supplies.

“We want our story to be heard because it is such a positive, happy ending. Yes, it was scary in all senses, from finding out you’re going from a family of four to a family of seven, to all of the instances during the birth; but we have five beautiful, healthy daughters from it. With all of the negativity happening in the world, we want to show that there is still positivity,” Ertley says with a smile.