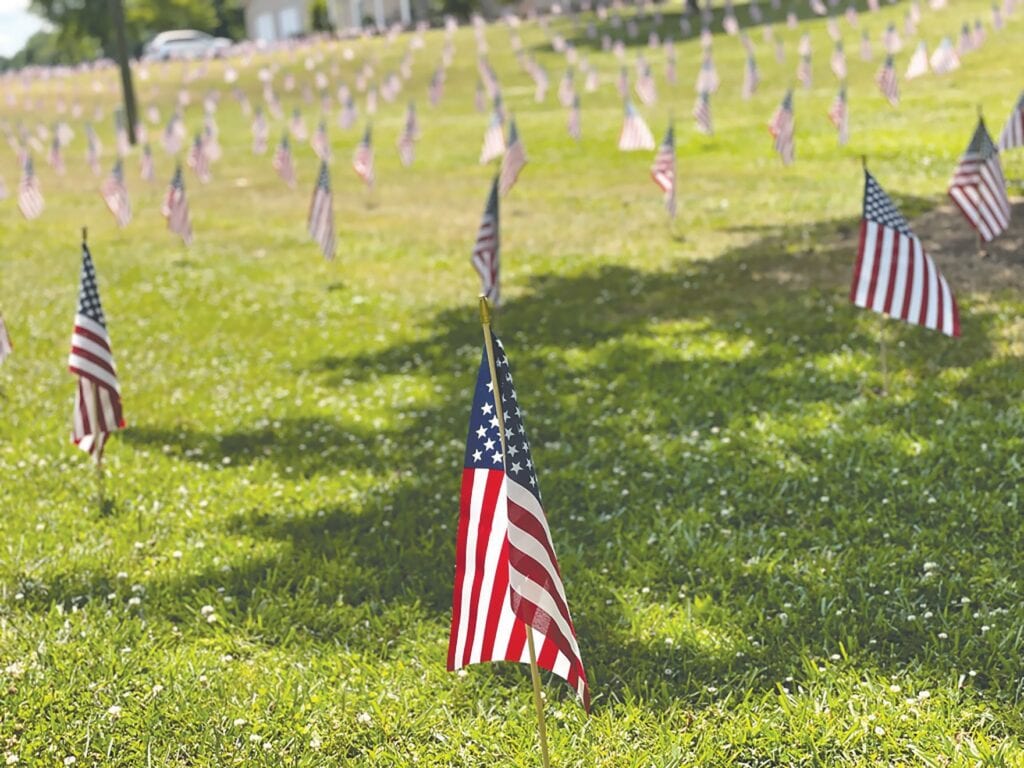 Sitting with Johnny and Wilma Box on their front porch Monday afternoon, American flags stretched from one edge of their yard to the other, up past the front porch, and all the way to road. Rows and rows and rows of flags meticulously placed.

“That’s 1.4 million men and women who have died for this country, died protecting this nation, our freedoms,” Johnny said. “We are trying to remind people of what this day is all about. It’s not about the hot dogs and the hamburgers. It’s about why you get to eat those hot dogs and hamburgers. It’s about the men and women who gave the ultimate sacrifice.”

This is the third year the couple has set up a flag display in their yard for Memorial Day.

“We were just talking one day about how everyone always decorates their yards for Christmas, Halloween, and all these other holidays, and we decided that we would just decorate ours for Memorial Day. This is something that we all should do.“

The flags that fill the Box yard are laid out in an easterly heading. There is 8 feet of space between them to the east and 5 feet to the north. Why that particular spacing?

Johnny is already planning for the 2022 Memorial Day display, which promises to be even more special than their display of 1,400 flags. But for Johnny, he would love nothing more than to see yards across Blount County donned with flags.

“Kevin Sorbo said that the sacrifice soldiers make can’t be repaid. I disagree. We repay it by being the type of American who is deserving of the sacrifice. The Constitution says we are guaranteed certain rights and freedoms. These men and women have ensured that we have it.”

So when May 30, 2022, rolls around, let’s turn Blount County red, white, and blue. Let’s pause, remember, and honor those brave souls who, as Ronald Reagan said, “have courageously fought and died for it [the flag] over the last 200 years, patriots who set an ideal above any consideration of self. Our flag flies free today because of their sacrifice… We are forever indebted to those who have given their lives that we might be free.”

My quick trip to snap a few pictures turned into a four-hour visit on a front porch with two people who were no longer strangers overlooking 1,400 beautiful flags. Watching them blow in the breeze, thinking of those 1.4 million Americans, and blessed to be living here in Blount County, in Alabama, in the United States. We are free. Let’s not ever forget those men and women who died and gave that right to you and to me.

John Thune said, “I believe our flag is more than just cloth and ink. It is a universally recognized symbol that stands for liberty and freedom. It is the history of our nation, and it’s marked by the blood of those who died defending it.”