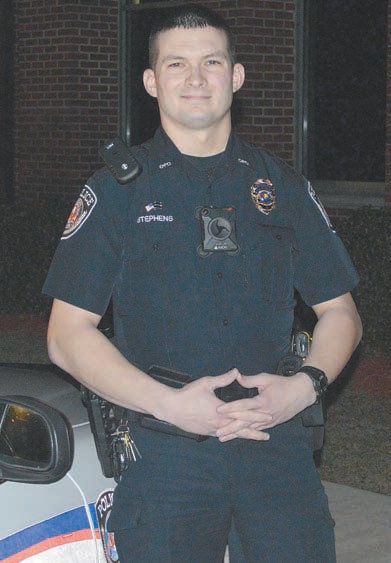 “I hope I’m just setting an example for my son,” says Oneonta Police Officer James Stephens. Not an unusual goal for many fathers, but for Stephens it is worlds away from his own upbringing.

At the age of 1, Stephens was abducted by his non-custodial father and kept hidden his entire childhood from his mother who had court-ordered custody. That childhood included many hardships, not the least of which was the lack of early socialization with other children.

His father moved them from state to state to avoid detection, Stephens recalls, almost always keeping him from the public and living in primitive conditions out of fear of being caught. At one time, they stayed in an old converted school bus. Others times they lived in a tent in the woods. Often, he did not bathe or have clean clothes for months.

When his father moved them back to Alabama, they lived in Blount County in a camper inside a barn without running water or electricity. His father’s family brought food, usually rice or beans, but at one point, they ate popcorn for breakfast, lunch and dinner to get by. His favorite meal, though, was biscuits which he flavored with mayonnaise or ketchup.

Stephens says at times his father was abusive. The physical abuse did not occur often, but the emotional abuse did. Little encouragement was offered and often he was told he was dumb.

The one constant in his life was the insistence on secrecy. His father made hiding places for him in case anyone came looking for him, one inside a stove in the school bus. One vivid memory he has is being secreted in an old duffle bag, sometimes carried around in it. On the rare occasion when he was taken into the public, his father would coach him to respond to a different first name.

Stephens rarely had contact with the world outside his father’s family. An aunt helped him learn to read while his cousins taught him how to spell and write and introduced him to math. One of these cousins eventually dropped out of high school. Realizing that it was a mistake, the cousin began to study for the General Educational Development (GED) diploma and encouraged Stephens to do the same. With the help of his cousin and tutorial classes at the Springville library, he eventually earned his GED at 18.

Stephens’s father told him when he turned 18, he would be free to do as he wanted, but he chose to stay with his father until he was 19. Then living in St. Clair County, he contacted the St. Clair County Sheriff’s Office and told his story, or at least part of it. Still influenced by his dad, he told investigators the lie he was coached to say about his father’s whereabouts, telling them that his father was not in Alabama, but living in Arizona.

Investigators arranged a reunion with his mother which did not go well. Stephens knew from a missing person flyer issued by the State of Alabama Center for Missing and Exploited Children, a division of the Alabama Law Enforcement Agency (ALEA), he was abducted in 1985, but a warrant was not issued for his father until 1992. The seven-year difference reinforced what his father had always told him, that his mother did not want him. Stephens says he walked out of the room because he could not reconcile the time lapse from abduction to an effort to find him. He has since reached out to his mother and they have visited a few times. Of her he says he does not “hold a grudge and I have no hate for her.”

Once he had his GED, Stephens worked briefly at Walmart in Oneonta, then joined the Army and was assigned to the 82nd Airborne Division. He served two deployments in Iraq. During one, his armored Humvee was hit by an improvised explosive device (IED), but fortunately neither he nor any of his fellow soldiers were seriously injured. After enlistment, Stephens joined the Army Reserve and still serves as a sergeant.

Following active duty, Stephens worked as a corrections officer and later deputy for the Blount County Sheriff’s Department. In March, 2015, Stephens was hired by the Oneonta Police Department. Oneonta’s acting Police Chief Judy Underwood describes him as a “top notch” officer and a “hard worker who goes beyond” what is expected. She says he “always worries if he did everything right,” and adds he is committed to his family. Stephens is married and has a 4-year-old son. He and his wife, Tristan, are expecting their second child soon.

There are no hard numbers available regarding the number of children abducted each year by a non-custodial family member. What is known is the Federal Bureau of Investigation reported in 2016 there were 454,676 missing children entries placed into their nationwide database (NCIC.) The National Center for Missing & Exploited Children (NCMEC) reports it stepped in to help in over 20,500 cases in 2016. Of those, NCMEC reports 6 percent, or 1,230, were considered to be “family abductions.” The overwhelming number of cases NCMEC assisted on were “runaways.” Corporal Jess Thornton, a spokesperson for ALEA, reports the agency issued nine missing child alerts in 2016, but only one involved parental abduction. He cautions this only represents the cases ALEA assisted with and is not a true picture of the number of abductions statewide. There is no central database to track all the cases.

The warrant issued for Stephens’s father was for “interference with custody,” a class C felony in Alabama. He died in 2008 having never been arrested.

Stephens, 32, admits he has lofty goals for someone who did not read a book on his own until he was 10 years old. The book was The Gingerbread Man, an early primer for most children, but it was a launching pad for him. As his reading improved, he devoured an old encyclopedia set and his thirst for learning is still not quenched. He is currently enrolled at Wallace State Community College and is on track to graduate in May with two associate degrees and plans to further his education to earn a bachelor’s in criminal justice and maybe a master’s after that. He says school is intimidating and a challenge because “I never learned how to learn, but I’ve come a long way.”

Stephens says he believes his life started the way it did for a purpose. Despite “having my childhood stolen,” he has encountered children through his work in law enforcement who are living in much worse conditions than he experienced. He wants to reach out to children who have also endured hardships to tell them his story with the hope of instilling them with the idea they can “…embrace a negative past and turn it into a strength.”