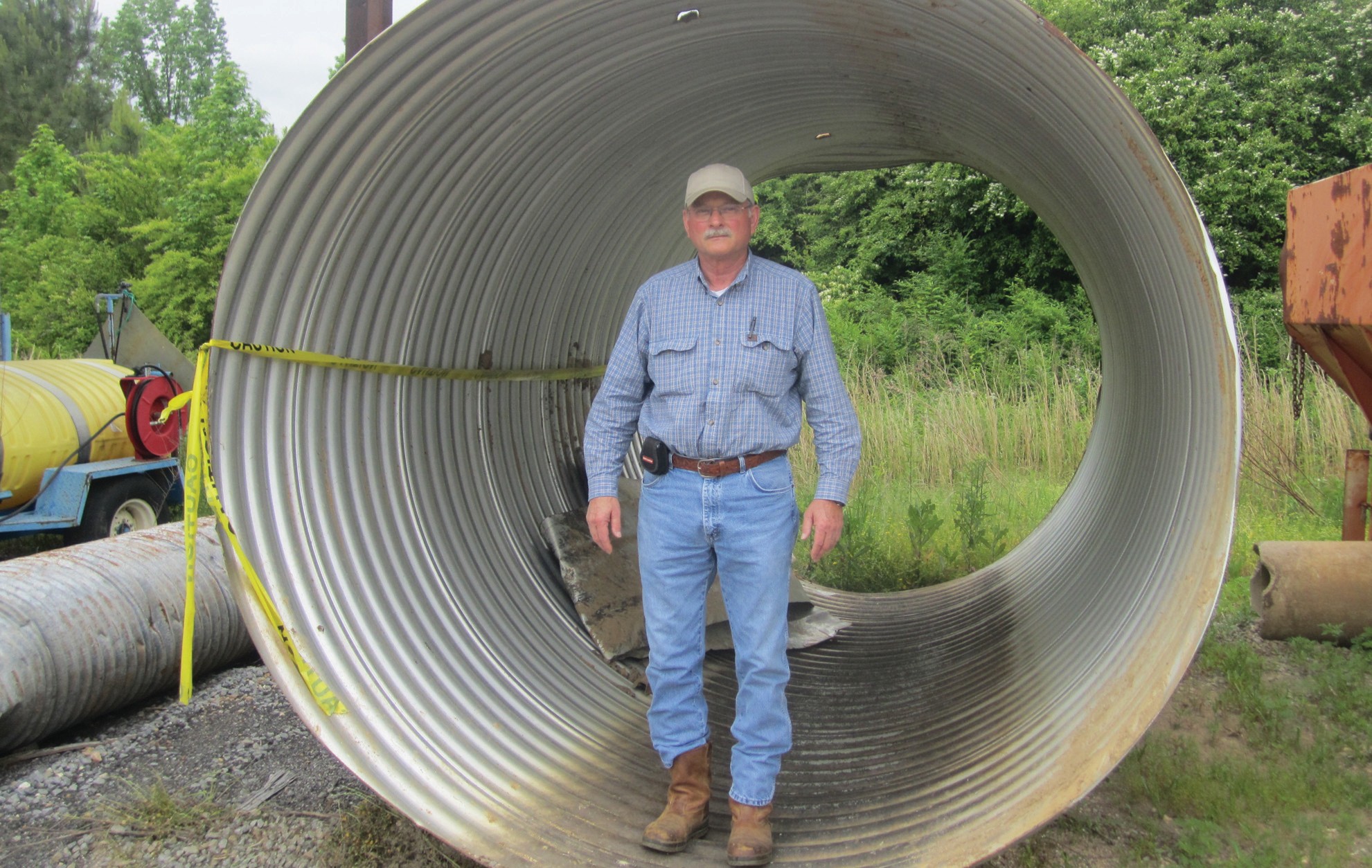 District 2 Commissioner Carthal Self demonstrates one of his district’s bigger recent problems: a 100-foot run of 96-inch diameter pipe – all of which had to be replaced except this one section. The rest of it had rusted through and had to be pulled out. Cost: $14,000 plus (just the pipe). Time required for the replacement project: roughly two weeks. The ditch on Mt. Carmel Rd. had to be re-routed and the pipe reburied. Works fine now, Self said.

It was a workman-like interview – no frills or fancy stuff, just straight answers from a busy man, not courting any controversy on the couple of questions that provided the opportunity. Carthal Self spoke simply and directly of his first six months on the job as District 2 commissioner.

The headline quote came in answer to question 13: If you had one minute to speak directly to all the residents in District 2, what would you say to them? Self answered:

“I’m doing everything I possibly can do to give taxpayers what they’re paying for,” he said. “Just give me a chance to do my job – all I ask. I can’t promise you the moon because I can’t get all the money we need to do everything I’d like to do. This is a large district with a lot of road miles (350 plus miles, 60-odd of them dirt, he said earlier). It just takes time to get over that many miles. Just bear with me.”

That ties in with his answer on a couple of related questions about what problems concern him the most.

“Just not being able to do everything that needs to be done,” he said. “I worry about not getting enough done in a day’s time. There don’t seem to be enough hours to cover what I need to cover.”

One major area of concern related to road maintenance crops up several times in the discussion: right-of-way problems.

“It’s not a problem that frequently,” Self said, “but it’s too frequent anyway. And when we have a right-of-way problem, it’s usually a bad problem.”

“On a lot of roads, we just don’t have enough right-of-way to fix the road properly. You may have a drainage problem near the road but off on private property. We can’t go on private property, so that keeps us from solving the water problem. That’s the road’s main enemy: water. People have to realize, if they want a road they can drive on, they’ve got to allow us what it takes to do the job right.”

Another problem is a little unexpected: beavers, or more to the point, beaver dams. “It’s a real problem and they’re everywhere. I wouldn’t even want to guess how many, but a lot.” More than a dozen? “Oh, yeah.” More than two dozen? “Well, I haven’t counted ‘em, but I can tell you it can be an all-day job clearing one out.”

Self mentioned a place where beavers have built multiple dams in a pond along a county road. Clearing that site will take planning and timing. When the dam is destroyed, the road will flood, and it will remain flooded for several hours, Self said. So they’ll have to open the dam shortly after the school buses have passed the site in the morning to give the flood time to subside before the school buses need to travel the road again in the afternoon.

Other problems? Yep. Problem-solving before reclaiming

(Reclaiming refers to plowing up the road down through the base layer, improving the base layer itself by adding more chert fill material if needed, then letting the road set up or “cure” for a time – usually several months or more – to establish a uniform, compact surface – before repaving. The process increases the useful life of the pavement. -Ed.)

Self said the spots that sink in are usually caused by clay deposits that shrink and swell in the base layer of the road. Fixing them involves digging them out and replacing the clay with as much as one to two feet of chert fill material. What does District 2 need?

Predictable question, predictable answer: in a word, “money” Self said. How much money? The Blount Countian wants to know. But Self’s not interested in sensationalizing the road problem.

“It would be foolish of me to name some huge figure,” he said. “Some of the roads in District 2 are in pretty good shape,” he said, “but a lot of them aren’t fixable without reclaiming. Patching is a short-term fix. You throw some mix in a pothole and before you turn around, it’s worked right out of there. It doesn’t work long term.” Thus, reclaiming. That’s the long-range fix, he said.

Other district needs include equipment, specifically a sheepsfoot compactor and/or a pad roller to help compact and stabilize both dirt roads and the base layers of roads to be repaved– after they’ve been reclaimed and before they’re repaved. Another grader wouldn’t hurt anything either, Self said.

“Those are things I’d like to have,” Self said. “But if I buy any equipment, I have to pay for it during my term of office. And the budget just won’t allow that, so we’ll just have to keep hammerin’ away at it without’em.” The road job vs. other duties

“I wish I could spend 100 percent of my time on the roads. But realistically, it’s closer to 90 to 95 percent. I have commissioner training classes given by the Alabama County Commission Association that I have to attend – administrative training is what I’ve done most recently. I won’t finish that until next year. Other duties? Working with fire departments, law enforcement, utility companies. Also school bus drivers and mail carriers. They tell me where problems are. I have to keep communication lines open with those people ’cause they’re my eyes,” Self said. County-wide considerations

What are the county’s most pressing problems? Self: “One thing is that Blount County needs to get a handle on spending money – saving money where we can. We want our money spent wisely. We’ve got to get control over our spending.” Self said his constituents expect him to provide good roads “where they don’t have to dodge potholes and don’t have to go out in the field to make another road” where the existing road has deteriorated. He said taxpayers don’t mind paying taxes, but they want their money’s worth and want him and the commission to be good stewards of their money.

The two trickiest questions of the day: (1) This commission has had a considerable amount of conflict as indicated by the number of split votes and differences of opinion in discussion. What do you think the future prospects are for this commission to work together and resolve differences effectively?

Self: “No two people will agree on everything. As far as me being upset with others, that’s not going to happen. I don’t follow others’ judgement. I follow my own. I think the commission will be able work things out for the good of the county. As for me, I ask people in District 2 what they want, and I listen to what they say. I value their opinion.”

(2) What’s the status of dividing the probate judge/ commission chairman job: What’s your personal view of the need for it?

Self: “We’re gonna have public hearings. That’s still in the plan. My thinking is that the chairman/judge does not have enough time (to do both jobs). We’re losing too much money not having a chairman full time to go after money that’s available. I think it would be beneficial to the county to have someone do it full time. It will be voted on and people can vote for it or not. I believe in letting the people choose.” Goal for this year

Self said he plans to reclaim 20.5 miles of road this year – an ambitious program that may not include repaving all of the 20.5 miles reclaimed. Some of the repaving may have to wait until next year, he said.

What could possibly get in the way of such an admirable plan? Storms, wind, floods, washouts, culverts failing, and the plague of potholes that accompany wet weather – little things like that. Want some examples? Here are some of the kind of pesky problems that can subvert the best-laid plans of mice, men, and county commissioners. These were posted on the blackboard in the break area of the District 2 work center. They represent several days worth of reports that can gum-up a long range plan:

There were more. That’s all the reporter had time to note before the interview took off. Carthal Self is a busy man.

And you thought being a county commissioner was a piece of cake? Think again.