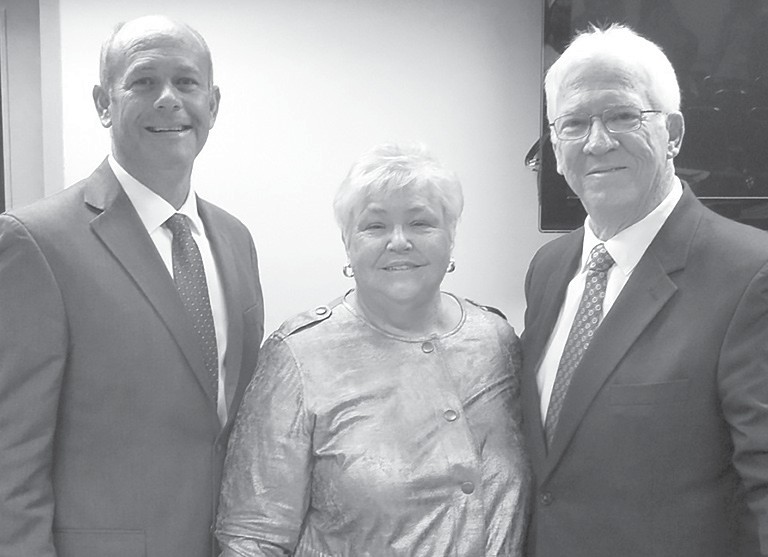 School board members sworn in, from left: Philip Cleveland, District 3 representative appointed to fill last two years of the term remaining following the passing of former board member Bruce McAfee; Jackie Sivley, reelected to a second term for District 2; Ken Benton, elected for first full term for District 1 after being appointed to serve the remainder of the term of former member Craig Johnson.

The county board of education meeting featured a virtual banquet of special recognition highlights before the business meeting Monday, beginning with the swearing-in of three school board members (see photo page A13). School board officers for the coming school year were also elected, with Chris Latta repeating as president and Jackie Sivley repeating as vice president.

Next, Southeastern School assistant principal Keith Moore described a unique and heroic collaborative life-saving event, identifying the main actors as he told the story of the incident. A referee calling a basketball game at Southeastern School had a heart attack and fell to the floor during the game. If he had to have a heart attack, Moore said, he chose the best possible place to have it – right in front of a firefighter, a school nurse, and a privately-employed nurse.

All immediately leaped to his aid, along with several others present at the game who lent assistance. Someone called 911 and an ambulance was dispatched. Meanwhile, the referee’s heart and breathing stopped, rescue breathing was administered, and an automated external defibrillator (AED) was rushed to the scene from its station in the gym, and the stricken man was stabilized by the time the ambulance arrived. The ref survived, was released from the hospital recently, and was reported to be doing well at home. The photo on page A13 shows some of those involved in the life-saving rescue. 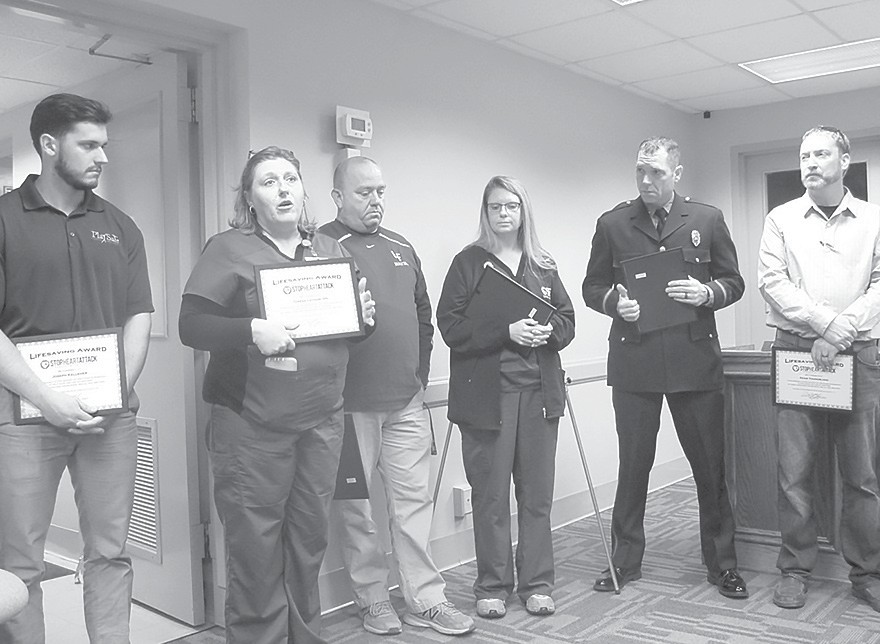 Amazingly, the dramatic emergency life-saving effort was repeated – for another referee – this time at a J.B. Pennington basketball game, on the same evening that the first successful rescue was celebrated in the afternoon school board meeting. A take-away from the two incidents in the same month: Blount County Schools have done their homework – by providing the equipment and the continuing training necessary – to be prepared for emergencies such as these.

Skylar McHan, band director for the Susan Moore Bulldog Marching Band was recognized, along with four of his students representing the band, for their success at the recent Alabama State Marching Band Competition in Florence with the designation as “Overall Class Winner” for 3A bands.

Superintendent Rodney Green was recognized for his designation as Superintendent of the Year for the 12 public schools of State Board of Education District 9.

The board approved the following superintendent’s operating recommendations for the district. It approved:

• renewing the asphalt seal coating bid with Whitaker Contracting Corporation for one year.

• renewing the gas/diesel fuel bid with McPherson Companies, Inc. for one year.

• the leave of absence for Betty Hock.

• accepting the resignations of: