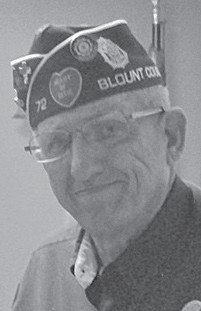 The front page of the May 29 issue of The Blount Countian featured a report of this year’s Memorial Day observance. The photo identified the master of ceremonies and two other participants shown prominently at the speaker’s stand. The article described the reading of the county’s casualty list from seven foreign wars. It named the featured speaker for this year’s ceremony. It identified committee members for the event.

But it didn’t name the person who did most of the work of lining up participants for the Memorial Day ceremony – the overall coordinator for the event, not only for this year, but for the last several: Donnie Jackson.

Donnie Jackson (right) is a Vietnam War veteran who has served as an official of all three of the active veterans’ organizations in the county: American Legion, Disabled American Veterans, and Operation Grateful Heart. Donnie Jackson is involved not only with Memorial Day, but with most other veterans activities that occur in Blount County: the Veterans Day Parade, sponsorship of county high school students to attend Boys State and Girls State, recognition of local merchants who make outstanding contributions to veterans welfare, recognition of other individual veterans, and many other such events.