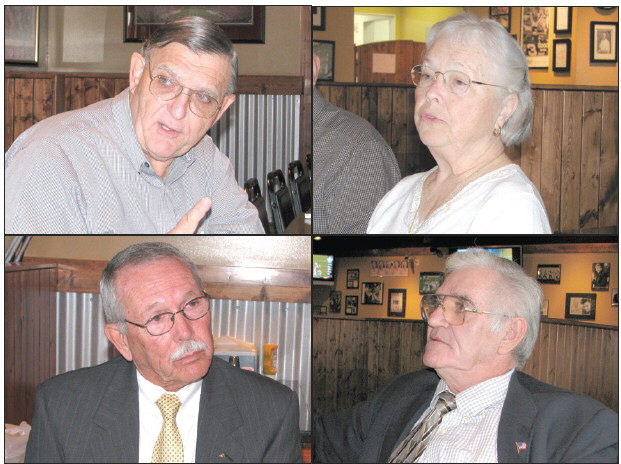 The objective of the meeting was not so much serious news as it was to get a reading on how these new public officials felt about the challenges facing them as they assume office, along with what they would like to accomplish while there. In paraphrased form, here’s what they had to say.

We hadn’t had an election in Susan Moore for eight years. One of our biggest things was to reunite the people and get them involved in town government again. We wanted to give them godly government – government that is honest and forthright and that would do a better job of communicating with the community.

One thing we’re working on is a project of the Governor’s called Hometown 2010. That’s where each town comes up with a message concerning something they want to commemorate about the town. We’re considering a historical message on the naming of Susan Moore. We’ll turn that in to the state and they will furnish us with a bronze marker similar to a historical marker. Then we’ll set a date some time during 2010 to have a commemoration ceremony with state officials and local people.

Another thing we need in Susan Moore is a security guard who can patrol the town especially during daylight hours to combat daytime burglaries. With a lot of families, both husband and wife work and there’s no one at home during the day, and that’s increasingly when crime occurs. I’ll be working on that.

Another major concern is our roads. I’ll be looking into our arrangements with the county for maintaining our roads. I want to make sure we’re getting our money’s worth. I don’t know exactly how those arrangements work, but I’m going to find out.

We’ve had two projects underway for sometime that have just recently been completed. We’ve renovated the old Masonic Lodge here and turned it into a real nice community center with a meeting room that will accommodate about 100 and a dining area that accommodates 75. It’s already being used – already booked up every weekend until the new year.

We’ve completely redone the inside of the town hall, moving partitions and creating two nice new offices. We turned the room in the back where the seniors used to do ceramics into the council meeting room. We also installed a bulletproof glass partition where the public pays their water bills, so we’ve finally got security there.

One of my next projects is to develop a welcome park in an area that lies beside and behind the fire hall and between there and the middle school across the way. I’d like to have a park with a gazebo to give it a kind of town-square effect. I’m real interested in that Hometown 2010 project too. I haven’t heard about that, but that would fit right in with what I’ve got in mind. We’ve got $1000 from CAWACO pledged to the project, but it’ll take a good bit more than that.

Right now, our biggest need is a grocery store. The only one in the area burned down a few months ago, and now there’s nowhere to shop for groceries, except Warrior or Kimberly. We’ve got to have a grocery store for our citizens.


We want to improve our walking track and make some improvements in that area around the walking track – make a place where you could hold a small festival or something like that. But before we put any money into it, we need to arrange for a longer term lease on the space. Right now it’s just year to year.

We also need to upgrade our fire trucks and figure out a way to provide service to Berry Mountain in the winter time. If there’s ice on the roads, we can’t get the trucks up that road. Our biggest need is to do something about that bad intersection where the fire trucks and other vehicles have to enter U.S. 231. It’s a blind intersection. We’ve talked about getting some equipment that’s called high-visibility gear to try to remedy it.

We also need to get some help to clean up a place where people have dumped trash in the past. I thought maybe I could get the county to bring some inmates from the jail out to help get that cleaned up. I’ll talk to them about that soon.

One of our priority goals is to revitalize downtown. We’ll repave main street and install new decorative lighting. Stop signs will replace all the traffic lights and we’re doing a lot of design work on those intersections to make them attractive – decorative pavers and so on. Also we’ll pave that back street behind the main downtown street running from the utilities board building down to the library.

We’re sound financially, and I will be fiscally responsible, but I don’t believe in hoarding money. The reason people pay taxes is for city services, and I want to give them their money’s worth.

We’ve consolidated all city departments except public works at the new city hall. It’s a $1.5 million facility and it’s paid for. We’ve got two other upcoming priorities. One is a new senior citizens center. The existing one is in the building the police department just vacated. The 911 organization may be interested in that building, but that’s yet to be worked out. We’re open to a proposal from them.

Meanwhile, we’d like to build a new senior center across from the walking track at the recreation park. Elwyn Thomas and Judge Standridge are both on the senior citizens board and we’ve already started talking about how to get that done.

Our other big priority is soccer fields. We’ve got to have some real soccer fields instead of the make-do fields the kids have to play on now. We have 300 plus kids playing soccer and it’s the coming thing. More of them are playing every year. We’re working on getting two new fields built out at the recreation park. We’re going to have new soccer fields before my term is out – sooner if we can find the money. We’re going for a grant to cover that work at the recreation park. I’ve already found out from my time on the city counsel that it’s all about the money – what you can do and when you can do it.