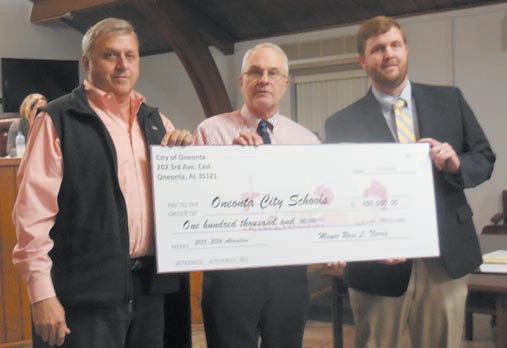 Despite a near second oversight, the Oneonta City Council succeeded in presenting its city school system a $100,000 check. Mayor Ross Norris had announced the payment at the city’s first meeting in January. After questioning by The Blount Countian, officials realized they had not voted to authorize that figure. In the second January meeting, Norris reached for the check facsimile to make the presentation but was interrupted by councilors noting they had still not voted the expenditure.

Part of Norris’s confusion may have come from the fact that more than 25 percent of the payment resulted from a previously approved portion of the city’s alcohol excise tax. The remaining portion ($73,141.01) comes from the city’s general fund. City school Superintendent Michael Douglas and board president Ricky Hicks accepted the check on behalf of the system.

All councilors expressed support for the payment, most agreeing it is far from enough for the system and promising still further discussion. Slightly embarrassed member Danny Robinson made the motion, withdrew his move, voted for the motion, and then changed that to an abstention. Immediately after the vote, he explained that, on advice of the city attorney, he decided he should not vote since he has done business with the school.

In later remarks, Councilor Tonya Rogers noted she has begun efforts to explore grant opportunities for the school system. The past decision to end art instruction at the school has left some residents unhappy. Rogers said she learned of a possible grant to assist art education and plans to explore that further.

Councilman Tim McNair, when recognized for his comments, won approval for almost $100,000 to purchase and equip two new Chevrolet Tahoes for the police department. According to Chief James Chapman, the vehicles follow his department’s 10-year replacement plan. Questioned by Robinson as to why the purchase was through a Ft. Payne dealership (Donohoo Chevrolet), McNair and others noted that the dealership holds a state bid contract.

The council voted to schedule a public hearing on Feb. 9 at 5:15 p.m. to examine the possibility of adding “place of worship” as a special exemption use with additional waiver to the city’s B-3 entertainment district.

That continues the already-begun process to permit Oneonta Redeemer Church a permanent location in the city’s downtown business section.

Norris invited Nicole Singleton and Betsy Stewart of Urgent Care to address the council. The two announced the opening of their facility in the city, introductory celebrations, and business hours. Norris remarked that one of the ACE (Alabama Cities of Excellence) study recommendations urged the addition of such an emergency care provider.

City manager Ed Lowe announced the next step in the city’s ACE procedure will be the formal presentation of their study. Following that report, the city will begin establishing its strategic planning process. Lowe also announced delivery of a Wallace State study on the projected economic impact of the anticipated Oneonta campus.

All members (Norris, Robinson, Rogers, McNair, Hal Blackwood, and Mark Gargus) attended the Jan. 26 meeting. The council holds its regular sessions the second and fourth Tuesdays of each month at 5:30 p.m. in city hall.