Many speak on Wallace State proposal 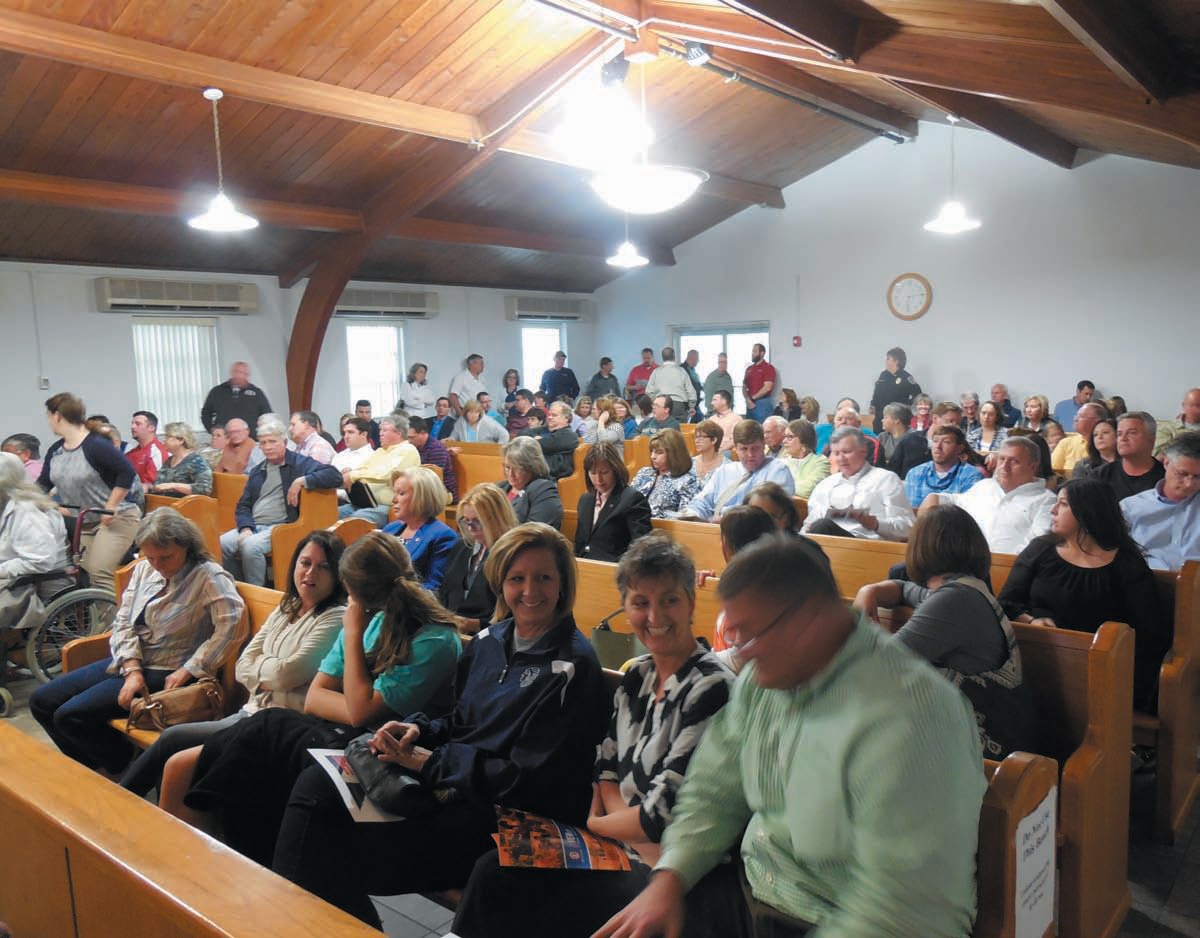 Observers, shown here between the two sessions, filled the Oneonta City Council chambers for March 22 meetings considering educational matters. Most appeared interested in the city school request for additional funding, while some spoke of their interest in the later Wallace State satellite campus presentation.

Participants at the Oneonta-sponsored first Wallace State informational session might be divided into three groups: the enthusiastic, the guardedly supportive, and the protect our library.

Wallace State President Vicki Karolewics carried the banner for some as she offered correction to the billboard sign which greeted her entering town. She noted the sign welcomed “Wallace State Hanceville”; she proposed it should read: “Wallace State, Oneonta.”

Lowe recapped material covered repeatedly by the press: the required memorandum of understanding with Snead State Community College’s permission for Wallace to serve Oneonta; the roughly 56,000 square feet within the proposed new building at the present library site; the building’s serving as a site for economic development offices, business incubators, instructional classrooms, a multi-purpose room which can, among other uses, serve as a theater setting, and a new library.

Some of the enthusiastic supporters spoke admiringly of the benefits of the community college system as an affordable step toward a college degree. Others cited the advantage that technical divisions offer for job training, especially for craft and middle skill workers (i.e. commercial truck drivers, welders, nursing assistants, electronics, and more). Banker Danny Kelly spoke of Wallace as yesterday’s interstate, in importance to economic development.

Arguably, the most important statement may have come from Chris Green. Green, who serves as both probate judge and chairman of the county commission, announced his public support for the project. He reiterated that he could see nothing else as having such a positive effect as Wallace on Oneonta’s downtown area.

Proceeding further, Green referred to his Royal residence but noted Oneonta is his city. He offered that it is important to have a strong working relationship between the city and county. “I know what this will do. . . I am excited to see what is ahead. . . . [ This] is not an expense but an investment.”

As for expenses, Lowe, who has cited various projected costs over the course of past discussions on the building, spoke of an $8 million to $8.5 million price tag on the structure. He had also spoken of partners and reidentified some of these as potential funding sources. His list included the county commission, the state legislative delegation, the Appalachian Regional Planning Commission, federal grants, and the city itself.

Oneonta Mayor Ross Norris added the point that the proposed building will include a safe room capable of holding up to 250 people for weather emergencies. Norris noted that this will serve a need once provided by the basement courthouse shelter.

Lowe advised that the plans presented remain subject to change, whether by unforeseen suggestions or financial restraints. He offered that should funding sources not materialize, then the building scale might have to be reduced. More than once, he held that new ideas might lead to improved plans.

While most attendees appeared supportive of the concept, some posed questions for thought. One asked why the city’s property across the highway from its ball fields would not be a better location. Another questioned the adequacy of parking in the proposed area; a third asked of safe pedestrian traffic from the site to downtown locations; still another asked of reducing the scale of the building by converting some empty store fronts for the business incubators.

Lowe and city councilors Tim McNair and Tonya Rogers said that the chosen site reflects the trend toward downtown revitalization programs. Lowe referred to discussions with Fairhope officials and the foot traffic advantages they cited in having a Faulkner State campus downtown. At the close of the meeting when pressed again about the location, Lowe took a show-of-hands vote, which revealed only two against the proposed site.

From a wall-projected aerial photograph covering much of the downtown Oneonta area, Lowe laser-pinpointed nearby businesses the city has contacted for possible future purchase expansion and parking. [Lowe had previously spoken of significant parking spaces available on site and of already-owned city land across from its senior citizens center as additional parking.]

He announced discussion with nearby businesses over closing Ingram Avenue between Second and A streets to have a pedestrian-friendly area. As for the empty store fronts, Lowe said that those would have to be retrofitted if used for the incubators and that the purchase and renovations would be very expensive. He added that while the proposed building has two floors, the second floor will have a ground level entrance on its west side, diminishing its visible footprint.

Economic development director Don Mitchell elaborated for some on the business incubator concept. He explained that these development techniques seek to assist new businesses by combining equipment, personnel, and resources to reduce startup expenses. He theorized that rental charges might well prove a net positive for the provider.

Other questions possibly related to this category included number of projected students and any announced new businesses to the area. Karolewics spoke of 40 to 42 initial class sessions, using labs and 11 classrooms, which would provide approximately 330 student spaces per instructional hour. She also cited statistics, revealing that Blount County has been shown as having 1200 students in state community colleges, with 985 of those at Wallace. She asserted her belief that a majority of those would enroll in Oneonta.

As for new businesses, Lowe referred to the purchases of several downtown buildings, some of which are under renovation for prospective clients. He named Pounders, an identified seafood restaurant, as one which is preparing for its opening.

While some if not many in this group might fall in the latter category, several were quite vocal in their concerns over the city library. Their concerns appear to lie in two key areas: the proposed size of the new library and site of the temporary transitional facility.

Lowe said the proposed new library will contain 10,000 square feet, compared to its present 7200. He also offered that the proposed adjacent 3500-square-foot, multi-purpose room may be scheduled for special events. Originally, plans called for a larger library space, but the library board objected to its covering an additional floor.

Library board chairman Carl Frey reported that state standards recommend “roughly 14,000 square feet” for a library in a city the size of Oneonta. He added his belief that Oneonta will continue growing, needing still more space. He asked for a larger library space but still on one floor.

In a near paean, resident Lea Simmons compared the local library with those of several states in which she has lived. She spoke not only of the facility but of the quality of the staff. As to a transitional site, she and others pled that the city find more space than Lowe has envisioned.

The Blount Countian reporter asked would Wallace partner with the city library in resources and personnel. Karolewics assured him the college would.

A proposed second discussion session is scheduled after the council’s regular meeting on April 12 which begins at 5:30 p.m. The above session began at approximately 6:35 and ran around an hour and fifteen minutes.