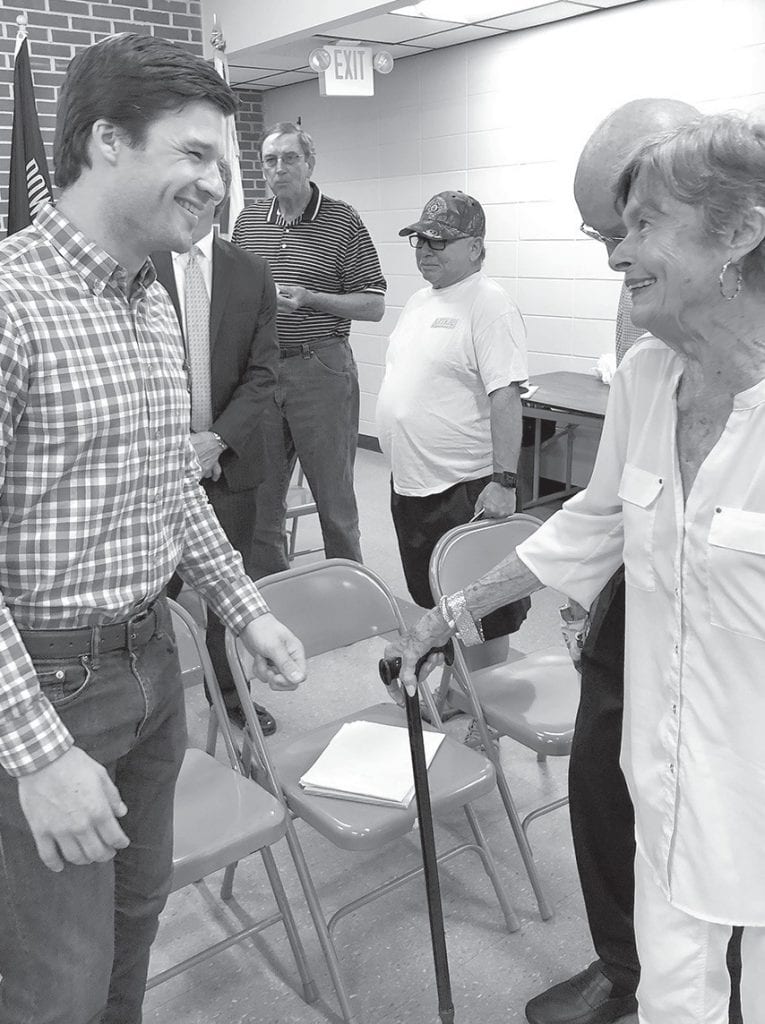 Blount County Democratic Club speaker Rob NeSmith chats with family members and others during the social time after his presentation on mandatory minimum prison sentencing at the club’s June meeting.

NeSmith presented statistics purporting the United States leads the world in total number of incarcerated (2.2 million) and trails only tiny Seychelles (estimated population of 95,000) in number confined (698) per 100,000 population. The Peoples Republic of China ranks second in total number of incarcerated at 1.6 million. While the U.S. has about five percent of the world’s population, it houses some 25 percent of the world’s prisoners.

The Oneonta High School and Birmingham Southern honor graduate reviewed various approaches attempted in the country prior to mandatory minimum sentencing and laws which discriminate against poor and people of color. Of special note, he emphasized the psychological aspect of people who become “institutionalized.”

In psychology, that term identifies people who lose their ability to function as independent members of the general population. By extension, that can occur with those incarcerated, in mental institutions, or in extended military service. For those so affected, returning to life in society in general can prove very difficult.

Holding a doctorate degree from The University of Alabama, NeSmith noted the improvement of the once 100-1 ratio employed in gram weight between powdered and crack cocaine. The reduced version still discriminates, but has been lowered to 18-to-1. Advocates for that change had noted that poor and minorities more often use crack whereas wealthy whites appear to prefer powder.

The program included lively interaction between NeSmith and the over two dozen in attendance. A motivation for NeSmith’s invitation came from President Donald Trump’s commutation of Alice Marie Johnson’s life-without-parole sentence. Johnson had served the last several years of her sentence in the women’s federal prison in Aliceville, Ala. NeSmith’s mother, Jane Ann, has worked several Kairos Prison Ministry sessions at the prison and had met Johnson there.