Man with a heart

(and a sense of humor) 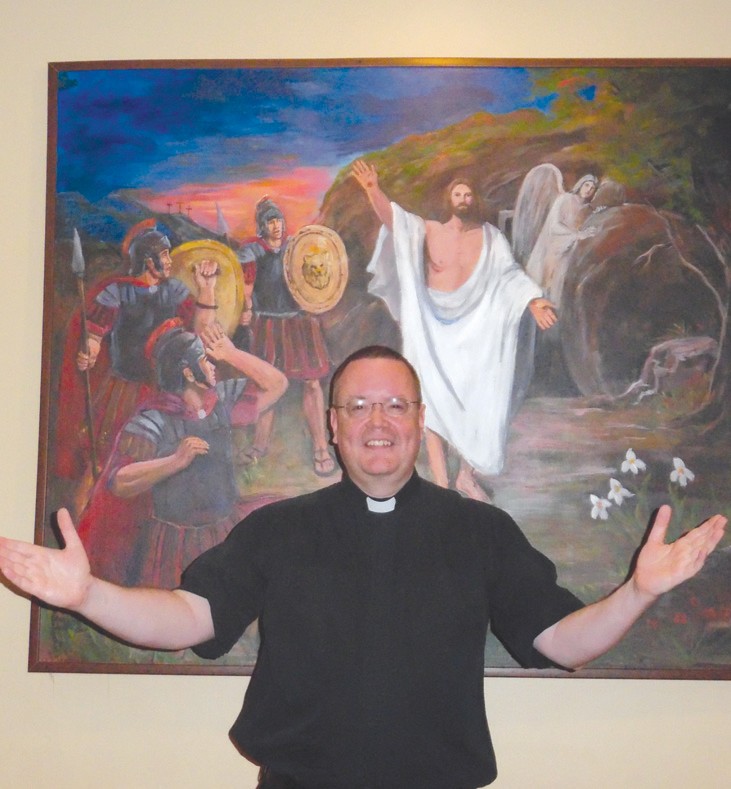 Father Jim Hedderman takes the reins at Corpus Christi Catholic Church. Best way to summon his attention: A hearty ‘Hey you!’ he says.

So, career-wise, he’s very much an Alabama guy, although he hales from Cleveland, Ohio, and says he spent his youth growing up along the shores of Lake Erie. He also got his education in that part of the world, receiving his undergraduate degree in theology and philosophy from Franciscan University of Steubenville, Ohio, and master’s in theology from St. Charles Borromeo Seminary in Philadelphia.

He said he had two semesters of Spanish in college, which he promptly forgot. His real education came in Russellville where he had to speak Spanish to survive baptism into Hispanic cultural depths, since his role as father of the flock required him to heal a rift between two divided Spanish-speaking prayer groups that threatened the church’s peace and tranquility. Which he did – learning conversational Spanish (and some of the other kind too), in the process.

Gift of grace:
reconciler and – humorist?

It also highlighted what Father Jim describes as one of his gifts of grace – the ability to reconcile people with each other, arguments involving issues, even conflicts of culture.

“That’s who I am,” he says.“I’m a healer. I build bridges. I’m a bridge builder.” Not knowing what to expect, The Blount Countian blundered off on a detour into state politics, asking if he could heal the division between factions in the state Legislature who have been unable so far to solve the state’s budget crisis.

“Oh no, that would take an exorcism!” he said, laughing uproariously, along with the surprised interviewer.

Who would’ve thought a mordant sense of humor in a man of the cloth? Along with the comic timing to deliver a one-liner like a Vaudeville veteran? Think that might come in handy as reconciliation tool?

On his preaching style:“I love the way Baptist preachers preach. I admire it, but fire and brimstone is not my style. I try to be uplifting in my messages. Rather than, ‘here‘s what’s going to happen to you if you don’t do right,’ I try to emphasize positives – how you benefit if you do do as you should. Of course, I risk becoming a great healer of insomnia with that approach,” he says with a smile.

On his outlook on his new assignment: “I’m blessed to be here for many reasons. I’m excited there are so many things going on in the church and in the community here, and we haven’t even started yet with special community events. Soccer is a big interest, for example. I would like to see the church have a soccer field.”

Two heads (churches) better than one

Returning to the theme of bringing people together, Father Jim talked about his efforts in Russellville. Combining forces with the Methodist church there he said the two churches sponsored community-wide get-togethers featuring soccer games for the youth and celebrating of Anglo and Hispanic cultural distinctives with potlucks, live music, and other things.“It worked in Russellville,” he said.“Both Anglos and Hispanic people came out and enjoyed themselves. Whether it will work here, I don’t know, but it’s worth trying.”

One closing tidbit on the good father’s personality and style is how he wants to be addressed. It’s somewhat informal.“Be sure you tell people the best way to get my attention,” he said.“It’s, Hey you!” he says in high good humor. Sounds like he means it (but you may be risking a comic one-liner in reply)