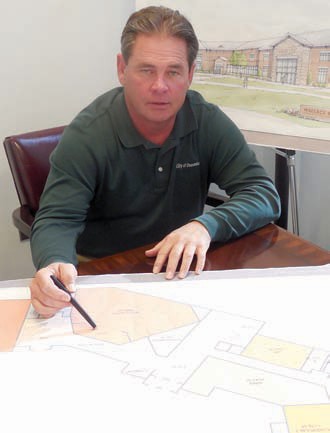 Following several inquiries from concerned Oneonta residents, The Blount Countian visited Oneonta city manager Ed Lowe and posed questions related to the proposed addition of a Wallace State satellite campus in the city. Lowe responded with seeming confidence and candor under the grilling. The questions and summarized responses follow below. 1. Please, give me the background, preferably briefly, as to the origin of the Wallace State Community College project.

It began some three or so years ago following the state position that to be economically competitive, an area needs a marketable workforce. Knowing that and that higher education is a good economic generator and community partner, we began contacting two-year colleges seeking interest in a satellite campus in Oneonta.

Wallace State seemed the most interested. We then learned that Snead State was assigned this area and began the process of obtaining an agreement with Snead to allow Wallace to take over. We have enjoyed a good relationship with other mayors and view this as a county-wide endeavor not just individual cities or towns.

2. What official action has the council taken to commit to the project?

3. What are the plans, currently, for new construction in terms of square footage, location, etc? How many classrooms would that entail? How many students are envisioned in each classroom?

As presently envisioned, the facility will encompass 55,000 square feet. That will include the city library, 10 classrooms, three labs, and a multi-purpose auditorium. Goodwin, Mills, and Haywood have provided the “very preliminary” plans. Wallace recommended that we design for 1000 students; some classrooms provide for 30-35 students and others fewer.

4. Do you have a preliminary cost estimate for the proposed facility?

We anticipate building costs at $100-$150 per square foot, which will include the architectural and engineering work within that figure. [Multiplied by the square footage that would run between $5,000,000 and $7,500,000.]

5. Several have asked how the building will be financed. Are there any city funds appropriated for construction?

Not at this time. So far, no money has been spent for the plans. When we get into more detailed work, then the architectural and engineering fees will come in. [See also question 10, below.]

6. As for temporary use of the former Gargus facility, what are the costs (actual or estimated) for that? What of the additional temporary class and bathrooms? How will that cost be covered?

There is no lease rate. We are responsible for improvements. We will have to add classrooms and other facilities; a lot of that will be done by our own employees. The costs will come out of the general fund. That is not in the budget at this point. When we were working on the budget, we had anticipated using the National Guard Armory for the temporary site.

[In later questioning, Lowe explained that with the Governor closing some armories, units may be moved to the Oneonta location which would take the space the city had thought it might use there for the temporary campus.]

7. I have heard rumors that the city has spoken with building and property owners about purchases near the proposed site for parking or future growth. Have there been such discussions? If so, what would be the source for those funds?

8. I have seen various estimates on numbers of students who might attend. What is your estimate and on what basis have you made that?

It’s hard to put a number initially. It would depend partly on marketing. This is really a city building. It can house a business incubator and other classes [for various appropriate groups or organizations]; it is not (exclusively) a Wallace State building. [Even though the drawn plans show the Wallace name, that will not be the case in final plans.]

Wallace is absolutely the most aggressive. They may need every bit of the space, eventually. Their projections are that they can recruit 1000 students.

9. The published class offerings seem very limited. I know you have to start somewhere, but do you have a commitment from Wallace, and if so, what is it?

10. Have there been any discussions with specific partners about helping in this effort?

Yes. Officials have spoken with possible county, state, and federal sources. Beyond that, there have been discussions with the Blount County Economic Development Council, business incubators, Appalachian Regional Planning Commission, Alabama Department of Economic and Community Affairs, the Department of Commerce, Alabama Industrial Development Training, Congressman (Gary) Palmer’s branch office, and the Governor.

There has not, however, been any formal request. We are still waiting to get our polished formal presentation. We think it is better to go in asking for a partner with specifics and a plan.

11. How do you see the project benefiting the city and area?

[Please, see the accompanying article (this page) on benefits for this response.]