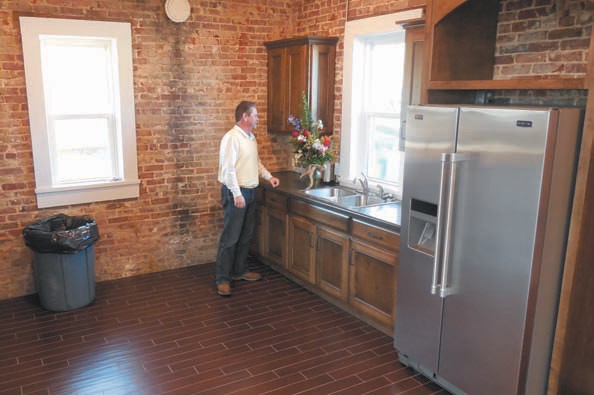 Ed Lowe surveys the catering kitchen, which is in construction, at Oneonta’s city-owned Little Brick Church.

Oneonta City Manager Ed Lowe responded to questions in a 90-minute mid-February interview. In the interview, as in past discussions, Lowe emphasized his desire for more community input. “I wish people would come to the council and work sessions to express their concerns. I believe that this is the process to get their input,” he offered.

Let’s begin with Wallace State. According to the report of your meeting with the county commission, you said the city’s elected officials are totally committed to the project. What actions, if any, have they taken which demonstrate that commitment? 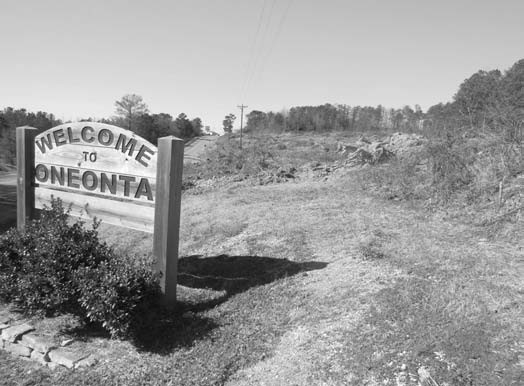 The city continues to clear land on U.S. 231 South for evaluation of its use as a possible youth recreation site.

With elections coming this summer, what commitment exists which could bind a new council to the project? Should there be a totally new council and they wish not to continue the Wallace effort, could they end the arrangement?

Nothing would bind them to an agreement with Wallace State at all. Between now and the election, we are actively seeking state funding [to assist with the project]. The governor has been supportive of Blount County. We have certainly supported him. [Prior to the Wallace project] he never really had an opportunity to help with anything major. We need a marketable workforce. The state is so strong on [promoting] workforce development. Now is a good time to be associated with that.

Please excuse my skepticism, but as I studied and taught history and have had association with skeptical newspaper writers, I have assumed some of that outlook. As a teen, I read repeatedly how Alabama was leading the region and in the top tier nationally for job creation. I would then fail to see that translated into reality. I now understand that economic developers often say what politicians wish them to say. I know we had a Snead State effort here that folded; I have some former students who are getting initial and remaining college course work online. How viable are new satellite campuses, especially with the state’s announced intention to consolidate present community colleges?

Certainly, distance education has a place. What we’ve been told is that workforce development does not lend itself to distance [online] learning. This facility is not just [academic] but is also for workforce development. One of the first is CDL (commercial driver’s license) training. In the future, we hope to make greater use of the incubator [concept]. In fact, on Tuesday [four days earlier] we met with the architect and increased our incubator space. Right now skilled welders are in high demand. We may partner with already existing fabrication shops to pursue that. I have lived around [the country] and when I returned, my skills were not marketable here. What would make us more competitive is to have a more trained force. There is a benefit to the city’s owning [the building], but at the end of the day, it is a risk. I’ve worked for four administrations [in the city], and all have had different opinions on how to move forward. This may seem more visionary. At the end of the day, they give me directions.

Human nature is to pick the best [or most accessible] fruit first. So, the best locations are gone; the issue now is workforce. In the Southeast, it seems we have leveled the playing field with recruiting incentives; the most [attractive incentive] is now the workforce. Wallace State can offer CDL, welding, industrial technical robotics and computer technology. We, here, are a little behind on Internet speed, but we’re working with Otelco on improving that. The computer area is a natural progression for young people today.

Did we learn something with Snead? Why did the Snead facility not succeed?

I hear all the time from people, “We want a bowling alley, theater, etc.”, but they still want to ensure a safe community. I’m a pretty simple guy, I don’t need a whole lot to keep me happy. How do we meet the community’s desires? Well, we need to know their wishes. My hope has been that this building [Little Brick Church] will be a gathering place for the community – a place to have meetings to discuss these matters. I may not be the one to bring that about. [Lowe made reference to the city’s ACE (Alabama Cities of Excellence) designation and that program’s emphasis on recruiting community input in future city designs. He said that ACE will present its formal evaluation on Feb. 23.]

You have mentioned the proposed building as a business incubator. Please, define that term for me and the readers.

I was involved in the city’s purchase of the old Wrangler building. While that was more of an industrial incubator, the new building would be as a start-up. Today, incubators are driven more toward office space, such as shared receptionist, office equipment, or such. Some facilities charge minimally to provide that space. Some of the facilities emphasize the biomedical field. That has appeared to be what has been most desirable in the UAB area. I think we need to pursue some type of relationship with Google.

When we last spoke a few weeks ago, I had understood the WSCC project was in the $5-7.5 million-dollar range. I read that projections are now for $6-10 million. What has raised the cost?

Part of the increase is in the changes. Reducing the multipurpose room size and adding incubator spaces raises costs. We are working with the legislative delegation about funding. In so doing, we did not want to present a low figure and then ask for still more. We didn’t want to shortchange ourselves. The library board members did not like our design for a library with a two-story atrium. They felt that would require additional staffing, increasing their operating costs. Should Wallace not come or should it leave Oneonta, we would still have the building for the library and other city uses.

The study you have distributed shows 90 to 120 students using the facility in various hourly periods. What of parking for those?

The plans there at the present library site accommodate 100 parking places. We also have the city land in front of the senior citizens center available for more space and we are in discussion with some nearby property owners about possible purchase of their property.

Again, seeking to see a total commitment picture, I saw attributed to Commissioner Dean Calvert that the county commission supports the Wallace initiative. Again, as an elected body with stated financial problems, what commitment, if any, has the county made?

We have no commitment in writing from the county commission. We are working on that. There will be a point in time when we will be asking for a formal commitment.

The study was done by Alabama Power’s economic development team.

How comfortable are you with the study’s estimated 900 students by 2018?

In general, I am very comfortable with the expertise level of Wallace. I have to put faith in them. We hire experts from time to time and accept their conclusions. We have to evaluate all this regularly, but I am pretty comfortable with it.

Does Wallace have any other satellite campuses?

I think they do, but I can’t give a specific. We have spoken with Pell City and Fairhope. Their mayors have been very happy with their satellite campuses [from Jefferson State and Faulkner State].

What are the upcoming steps in the city’s newly purchased 100 acres and the old dump and adjacent sites?

At the 100-acre site (Ala 75 North) we have found the elevation of the casing pipe under the road. Now that we know that, it will permit sewer construction which will likely be the first step. We have contracted for entrances and are pursuing an updated boundary survey. We are working with Alabama Power on a brochure we can use to market the property. We plan to build the entrances with city personnel. The state highway department should accept our projected entrance plans, since we foresee these as very logical. We do want a preliminary master plan for the development. As for the old dump site [U.S. 231 South] that the city has owned for years, it has extremely rough topography and was part of the old Champion Mine. To determine its suitability, we pretty much had to clear it to see its elevation and water channeling. We do plan to use it for youth recreation. The old dump portion would not be for fields. We have a shortage of flat spaces with grass.

I have heard some concerns over the safety of road conditions and turns into the old dump site, if used as a recreational park area. Have you considered that and, if so, what changes might be made, if any?

I can understand concerns over that. We plan to assure safety for any use of the area. It has not been an attractive entrance to the city.

We’ve heard of Zaxby’s and Daylight Donuts, do you have any updates on the arrival of either? Has Zaxby’s signed a contract on the Second Avenue East land?

Zaxby’s is set to close somewhere around Feb. 22 or 23. The Economic Development Council [scheduled for space in the Wallace site] owns that property. The hospital board had transferred it to the county and the county to the EDC.

In your council presentation you mentioned Jefferson’s. What, if anything, are you at liberty to say about that prospect?

We have been in discussion with them about downtown locations. We think it would be a good fit for us. The Jacksonville-based company presently has 26 locations.

The elephant that has been in the room for a while is the ethics commission report to the district attorney. Do you have any knowledge of that to share?

I have had absolutely no interaction on that.