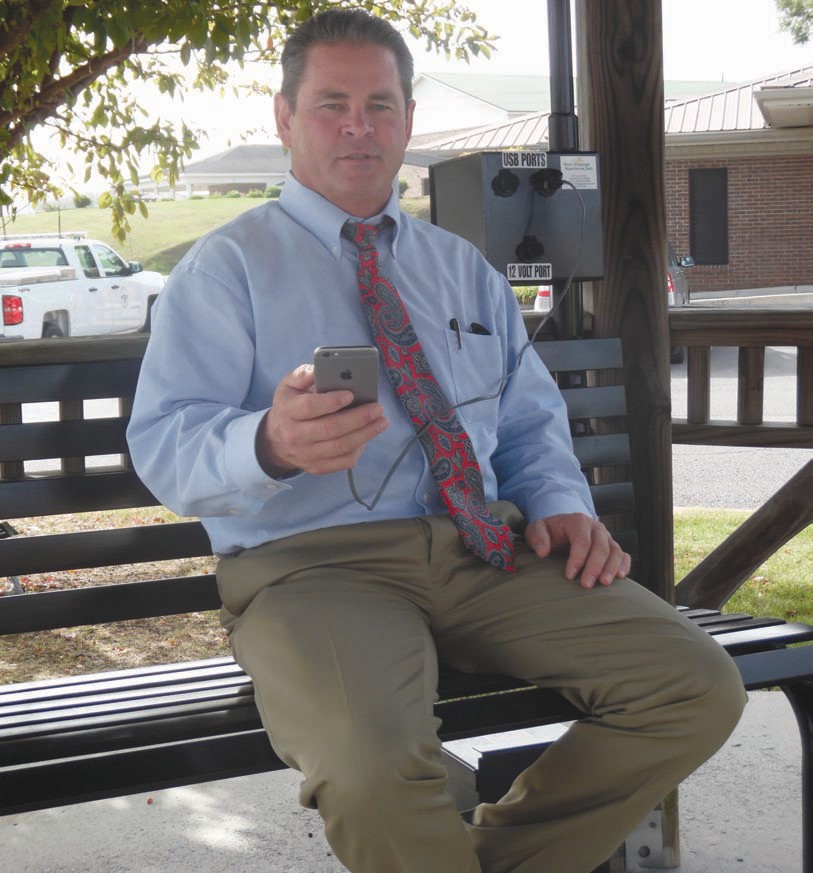 At the gazebo downtown, city manager Ed Lowe gets a charge (for his phone) at Sun System’s newly installed solar charging station, the locally conceived, developed, and manufactured product that fits right in with the renewed economic energy that seems to be infusing downtown and the surrounding area.

“The general outlook for the town is more positive than we’ve seen for several years,” said city manager Ed Lowe, neatly stating in his first breath the theme of the conversation that followed.

He followed by listing several positive indicators of the city’s resurgent economic vitality:

• recent sale of more than half a dozen buildings in the downtown and near-downtown area.

• more requests for information from out-of-town interests on city characteristics and opportunities.

• pervasive sense of optimism throughout the community. (“Community optimism is as high as I’ve seen it since I’ve worked here,” Lowe said.)

Those generalizations have some facts behind them, too:

• new apartment complex planned – 40 units off Ala 75 near the National Guard Armory.

• and get this, boys and girls – a new concept for this area: two quadruplexes (think double duplexes) at Limestone Springs built on the luxury college dorm model: private bedrooms and bath for each unit, plus a shared kitchen and living room common area, including imaginable amenities – built to target the corporate market.

Lowe said the city collected about $180,000 in alcohol tax revenues in the first six months of operation under the wet regime, from 16 licensees.

“Based on other cities, we could conservatively estimate about $280,000 per year from that source,” Lowe said. He said 25 percent of those proceeds go to schools, 25 percent to public safety, and 50 percent to the city general fund.

“We’ll try to use the general fund portion of that money for community development,” he said.

“Through the years of the economic downturn we thinned up on expenditures wherever we could,” Lowe said.“During that period, people had good ideas for things that needed to be done, but we weren’t in a financial position to do them. We’ll still approach the budget conservatively. That’s ingrained. We could do everything everybody wants and borrow enough money to do it, but then if the economy goes south again, the burden is on the community. It’s the good name and character of the community that’s on the line, if we get in the position of not being able to live up to our commitments.

“We’ve been fortunate that hasn’t happened. We want to grow, but we want to manage it responsibly. When you have a chance to grow, you have to take advantage of it. I think we can improve amenities here and at the same time maintain the quality of life we have, which is what people come here for. It takes a concentrated effort to balance those ends. It’s a constant balancing act.”

Relating to the renovation of commercial property downtown

A public hearing will be held at 5 p.m. on July 13 at Oneonta City Hall to consider zoning in the downtown area between A street and 5th street and between Railroad Ave. and 3rd Ave. E, incorporating downtown and the downtown fringe area. The proposal to be discussed would change present B-2 zoning to amended B-3 zoning to provide more flexibility in the use and improvement of business property. Those interested should plan to attend and contribute ideas and comments as appropriate.