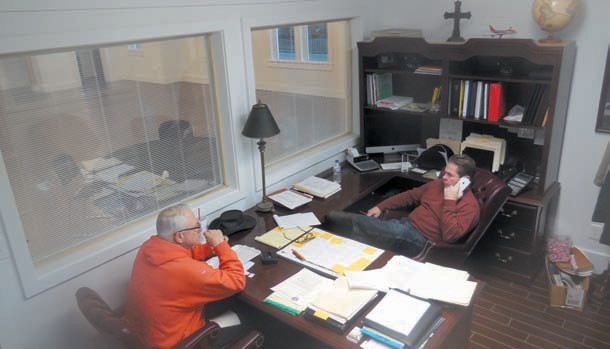 Oneonta city manager Ed Lowe fielded questions posed during a recent visit from The Blount Contain. Community residents had broached some of the subjects with the newspaper and others emerged from the discussion itself. Lowe has moved his office from The Danny B. Hicks Municipal Complex to a converted space within the city-owned Little Brick Church. Some have questioned the moving of your office in light of the previous argument in favor of the municipal complex as a site to unite city services.

I am actually only 50 yards or so from the complex. I am looped into the system from my new office. I have direct telephone service and am readily available if needed.

There are several reasons for the move, beginning with the growth of city municipal court, which needs additional space. The city shifted from a judicial collection service, which had come under heavy criticism for perceived financial abuses. The city decided to place that function in-house and that required additional space.

Defendants, also, needed a place to meet with their legal counsel away from the ears of other court personnel. There were three individuals in one office.

An additional factor is the city’s need for a human resource person. That has become a major concern among government, as well as private institutions. That person will deal with some confidential issues and will need still another dedicated space.

Under the most recent changes in my job description, I have assumed more recruitment and community development responsibilities. We needed a facility to host groups for discussion, workshops, and meetings such as the ACE (Alabama Communities of Excellence) program. The former sanctuary provides that with a greater hands-on opportunity for me.

I don’t think we can manage effectively any more without neighborhood groups. We needed a place to sit down and talk with them.

We considered recruitment firms for development but felt they would lack the passion for the city that a community resident would hold. I am available for some of these developers after hours and on weekends. The recruiters would likely expect to limit their activities to a 9-5 framework. I have at least weekly meetings with every one of the projects that are underway now. They need someone with the city to assist them.

The city [fathers] decided not to hire an $80,000-a-year contractor. We made an administrative decision to move into this [Little Brick Church] facility.

Developers want a fast-track service. While I can’t meet every need, I can offer some consolidation and knowledge which can speed their process. As an example, I make sure the city chert pit stays certified, which is a plus for construction in the city.

My job description changed when we changed Brandon Horton’s. He now handles some of the duties I did under city manager, in addition to his public safety director role.

That change allows cross-training. Should I walk out here and be hit by a bus, we would need someone who could step into my position. Brandon has increasing knowledge of some of what I had been doing. We try to make sure that both of us are not off at the same time, during the regular work week. The city’s recent purchase of 100 acres adjacent to the city limits have prompted some to question why the city should be in the real estate business.

Major retail developers, typically, [stated as 75% of them] have some combination of a private-public project. Developers have found such easier to work with.

State constitutional Amendment 772 provides wider leeway in what is considered acceptable incentives that public bodies can offer. Prior to that amendment, there were all sorts of incentives provided; some under questionable conditions.

That piece of property [the 100-acre site] puts us in use at a much better place, while benefiting the owners. Had we not acted, it might likely have been put into a trust and off the market for some time. We do not have to make our first payment on that land for almost six months. We may well be able to have sold some of that property in time to make that payment. [Lowe did confirm that the agreement commits the city to the full 20 years of payment with no early payoff.]

That was one of the few pieces of property available near Wal-Mart, a highly desirable location for some developers. The gravity sewer availability on that property will also benefit adjacent property for development.

We don’t try to compete with private real estate firms. We do refer prospects to possible property that real estate agencies hold. Some have questioned the announced Zaxby’s commitment. One queried if the recent rains and the condition of the proposed site during the deluge would cancel that project. Where is the city on recruitments?

There is a cross stream under the property [the rumored Zaxby’s location]. I have asked the state to look at the cross drains there. Everybody (developers) has a geo-technical study done now. Based on studies, developers determine at what elevation they must build to protect their property and investment.

As for recruiting developments, Cullman didn’t “blow-up” overnight. They and Pell City worked for years to get where they are. [Both, of course, have a key advantage in interstate exits.] We got in the game late. Because of that, we have to work harder.

In May, I will return to the ICSC (International Council of Shopping Centers) convention in Las Vegas and will have a “slick” brochure to present to would-be developers about Oneonta. I will meet with as many as I can that appear appropriate for our area.

That convention allows us to meet or at least identify the person who serves as the major contact in developmental expansions. It is such a science now on obtaining these developers.

A fast-food hamburger supplier spoke with us. They have very specific details as to how they want their store and they very seldom make concessions on that.

It is no longer enough to say that sewer is available to a property. You must be able to say it is builder-ready. That is one reason the new 100-acre site is so important to us. With a little work, we can have that builder-ready. Most of that work can be done by the city and/or our own utilities department.

We spoke with a representative of a major discount gasoline seller some time back about locating here. He asked me to explain what was meant by a “dry county.” When I explained to him it wasn’t just a dry county but also a dry city (at that time), he indicated they would not be interested in locating here.

I did my due diligence in Atlanta last year to see the company representative who had been his assistant earlier. When I approached her and introduced myself, she told me that Oneonta did not meet their design model. I then explained we were now a “wet” city. She said that changed things.

With the past period of economic uncertainty, some developers delayed expansion. One major restaurant chain representative with whom I have spoken told me that they cannot look at Oneonta at the moment. They are two years behind on building at locations already identified. Andalusia recently bought property and gave it to Zaxby’s to entice them to locate there.

The [Little Brick Church] facility allows us to build relationships with developers. We hosted an Alabama Power Company gathering here. That company serves as a major recruiting and informational source for us and others in the state.