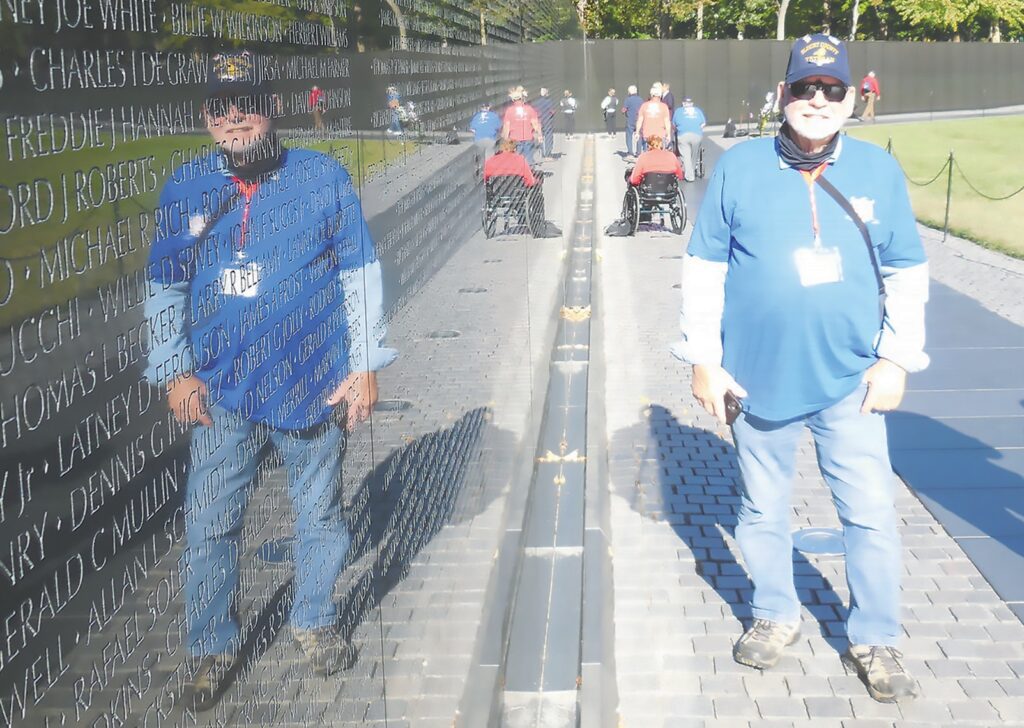 Amy Rhudy, Blount County Museum director, spearheaded both the 2008 and 2021 flights. She expressed appreciation to museum volunteers Briar Fowler, Linda Godwin, Margaret Hudson, Laura Roberson, and others who helped organize and coordinate this year’s project along with Bobbie Bradley, COO of the Honor Flight Network.

Rhudy reports 177 veterans, guardians, flight crew assistants, and media made the more-than-19-hour excursion. She revealed that donors contributed more than $88,000 to cover the chartered flights, buses, boxed meals, and other expenses. Bradley, in speaking with guardians at their orientation, praised those who donated, noting that guardians on many flights elsewhere have paid $500 or more to cover their own costs on the flights.

This flight consisted of veterans from World War II, Korea, and Vietnam eras of service.While most of the veterans came from Blount County, a few from adjacent counties who aided in fundraising or on recommendations from local veteran organizations joined the trip. Each veteran, ranging in age from mid-60s to early 90s, had a guardian, who in some cases were family members, to accompany and assist him or her.

Lone Eagle Honor Flight veterans pause for a group photo at The United States Marine Corps War Memorial which depicts the flag being raised by soldiers at Iwo Jima during World War II.

Oneonta police escorted the four buses, which departed from Lester Memorial United Methodist Church at 4 a.m., to the Birmingham airport for their Allegiant Airlines chartered flight to Baltimore-Washington International Airport. A volunteer group of veteran motorcyclists greeted the group in Baltimore and escorted members to Washington. Another volunteer rode each bus to provide a personalized guided tour of the passing city, emphasizing facts of each stop (Arlington Cemetery; The Tomb of the Unknowns, the guard change and wreath laying; and the Air Force, Iwo Jima, World War II, Korea, Vietnam, Lincoln, FDR, and MLK memorials). 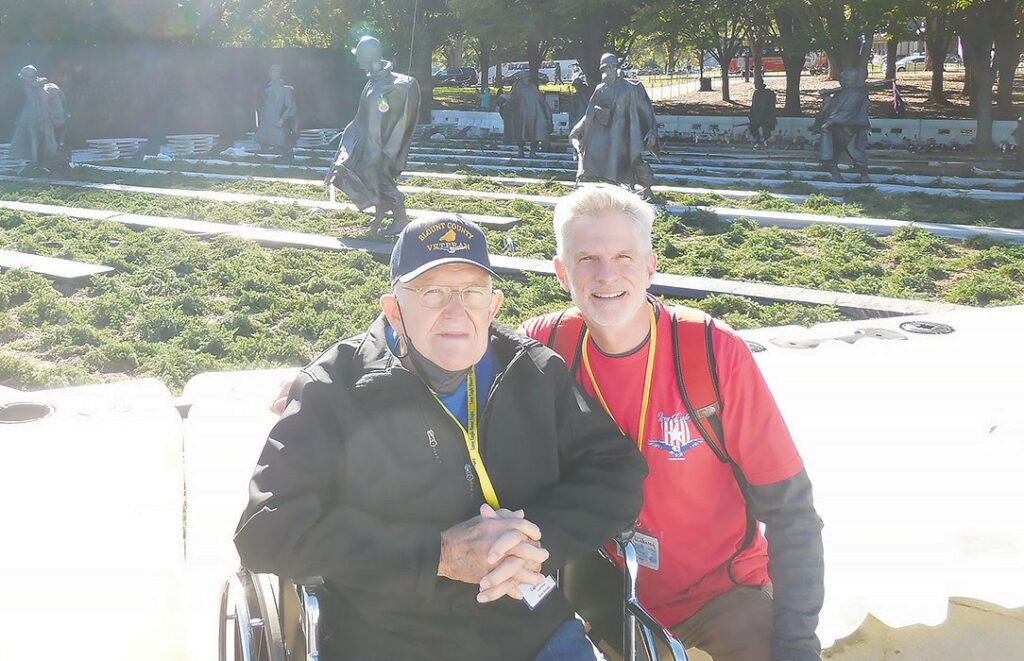 On the buses returning to Oneonta from Birmingham, volunteers held “mail call” as the veterans received museum-staff-solicited letters from family, friends, and local elementary school students thanking them for their influences, lives, love, and service. Back at the Lester departure site, scores of family, friends, and other well-wishers greeted the veterans, some of whom were from “The Forgotten War” and some who had never received a grateful mass homecoming.

In evaluations, some veterans wrote of their being touched by the memorials, but many, also, wrote of the human experiences. In response to “What have been your best memories of this trip?” answers included: “The joy of sharing freely with other vets,” “Meet other vets,” “New friends, old memories,” “Going with family,” “Family time and the history experience,” “. . . camaraderie . . .,” “The fellowship and excitement of being a part of this wonderful group.” 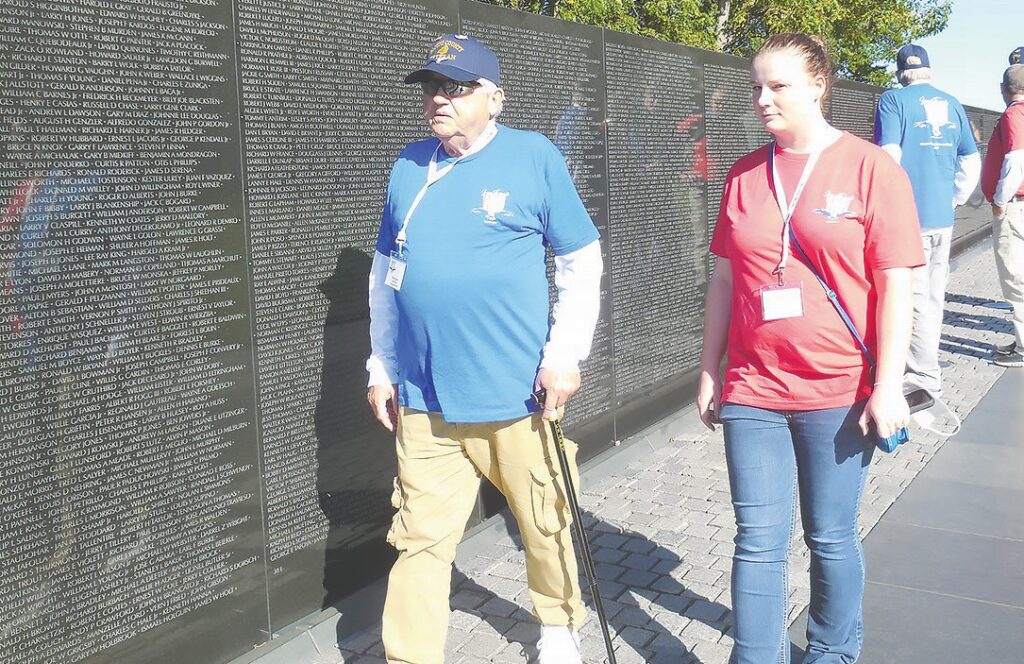 This reporter observed God choosing to act anonymously, which until recently he would have called “coincidences.” — a father and son seated nearby who discussed years past events unknown or forgotten by the other — two veterans who had lost contact after attending one year in grade school together hearing each other’s name shouted for mail call — my Vietnam veteran telling of the one he knew who had died by his own hands, seeing his name listed in the printed roster of those carved on the wall, and then hours later hearing the veteran seated behind us speak of making an etching of that same soldier’s name and their association prior to separate deployments — hearing one guardian explain she had never met her veteran before but that they had now become one.

Rhudy’s summary echoes that of above. “Honor Flight was a wonderful experience! I believe it brought peace to many of the veterans and finally gave many of them the opportunity to open up and share experiences and feelings. I personally believe it was the welcome home that many of our veterans never received when returning from war.” 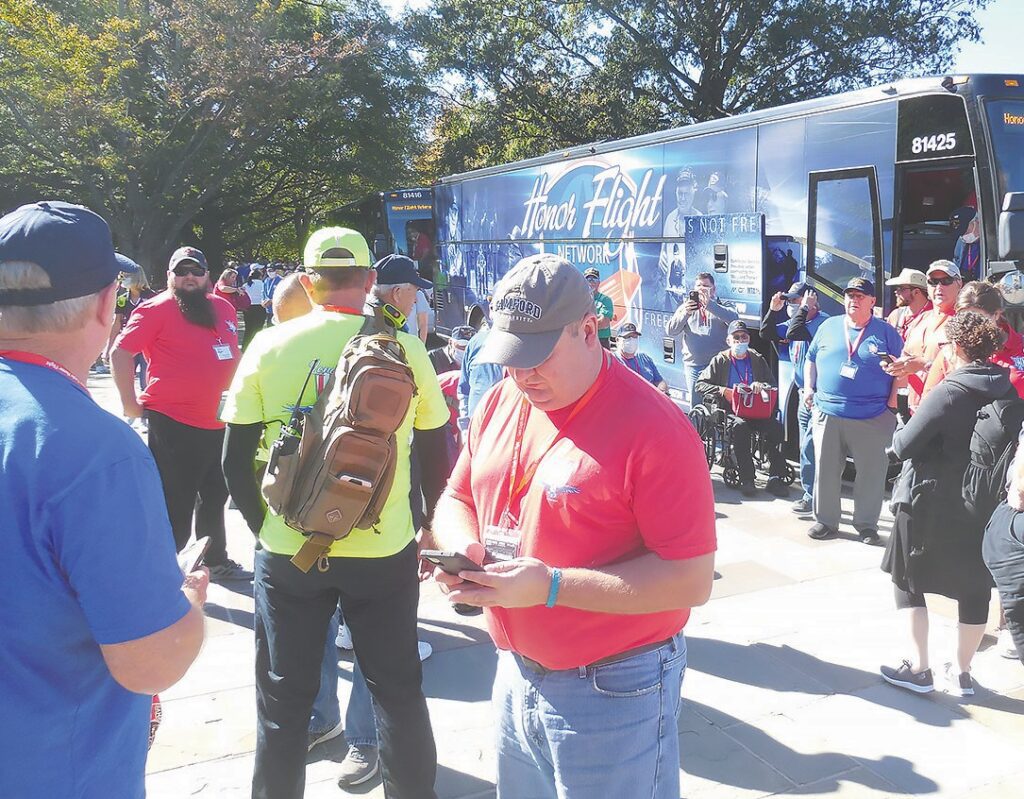 Veterans and guardians exit the Honor Flight bus in Arlington.

Veterans were provided evaluation forms. By press time, over one-third had returned their forms. That statistical breakdown aligns similarly to World War II which reported about one in six Americans who served in that war saw combat. In this case around three in ten saw combat. Of the 32 who had responded to the inquiry, nine said they had seen combat, 21 said they had not, and two did not answer. Many think virtually all service members see combat, not considering that there are clerks, medics, cross-trained-chaplains, drivers, transporters, pilots, police, translators, radio operators, photographers, journalists, clearing and construction workers, reconnaissance experts, decoders, supply personnel, mechanics, cooks, communication technicians, and myriad other positions which support those in actual combat.

Of service injuries, 12 said yes with one noting “a broken toe;” 19 answered no, and one did not answer. On service entry, 13 marked “enlisted;” nine – “enlisted in anticipation of being drafted;” eight – “drafted;” and one explained he entered after having finished as a second lieutenant in ROTC; another listed “drafted” in an early service and then “enlisted” several years later as a career. Many credited their service for disabilities, with hearing loss leading that list for those who specified their disability.