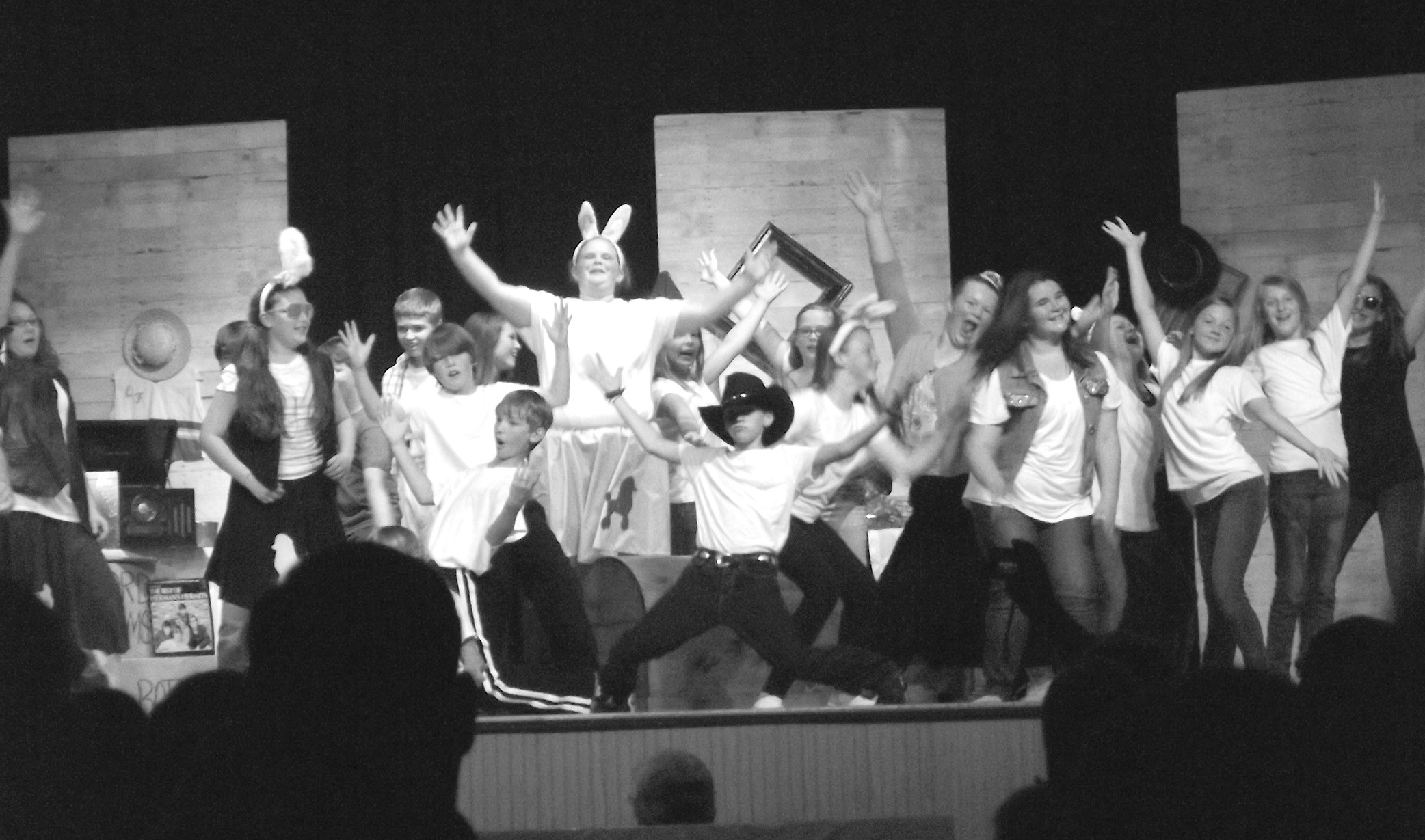 The finale of ‘Dance to the Music.’

The packed cafetorium of Locust Fork Elementary School buzzed with anticipation and excitement last Thursday night as the sixth-grade class prepared to present the original musical, “Dance to the Music.” The play was written by Christy Partain, head of the school’s music department. Taking a similar scene from a different production, she incorporated a wide variety of musical numbers from year’s past, and formed a story line around Locust Fork School and its history.

This creative and fun trip down Memory Lane centered around several students (played by Jayleigh Tawbush, Crisey Hicks, Allisa Waldrop, and Devin Wheeler) who decide to look around an old attic. They soon discover many “unfamiliar” items from the past, which prompt conversations with their parents (played by Alana Colafrancesco and Jarrett Peeples), grandparents (played by Anna Hood and Kobe Floyd), and greatgrandparents (played by Alexis Holland and Braxton Yager) as to the history behind each of these treasures and the memories their relatives have of years gone by.

After a slide show, featuring pages from the school yearbooks throughout the years, this very animated group of students opened the show with a dance line. A variety of famous dance moves including “The Swim” and “The Mashed Potato” were demonstrated. The highlight may have been an outstanding rendition of the popular 80s move “The Worm” by student Preston Castleberry.

Each of the four Acts of the play contained musical scores from different eras including, “A Chorus Line”, “Do You Love Me?”, “Old Time Rock and Roll”, “The Bunny Hop”, “Thriller” and “Footloose”. During each number several students would dance, while soloists sang the tune with the help of a back-up chorus.

Between each of the four Acts, students gave the audience brief historical facts that pertained to the school, or community in general. The audience learned that the school burned down in 1961, at which time places like chicken houses and buses were transformed into classrooms for the students. They also learned that back in the 1930s Massey Garage on Hwy 79 was used as the local hang-out, where students would go to listen to their old time rock-n-roll music.

Highlights of the evening included Michael Jackson’s smash hit from the 80s “Thriller”, during which students preformed the exact dance moves from the video, while soloists Rickie Wall and Adam Blackmon sang the lyrics, and Clayton Gray did the voice-over.

The final scene from the movie “Footloose” was also preformed, as students line-danced in their boots and cowboy hats, and Luke Campis did an unbelievably exact imitation of the robotic breakdancer from the movie

During the final scene of the play, the students realize they may have more in common with their relatives than they previous thought. A final dance-line crossed the stage, as the modern sounds of the Black Eyed Peas hit song “I Gotta Feeling” played in the background.

The crowd ended the night with a standing ovation for the outstanding performance given by this young, and very talented group of students. Bravo Locust Fork Sixth Grade on this stellar rendition of “Dance to the Music”!