Locals grieve over events they feared 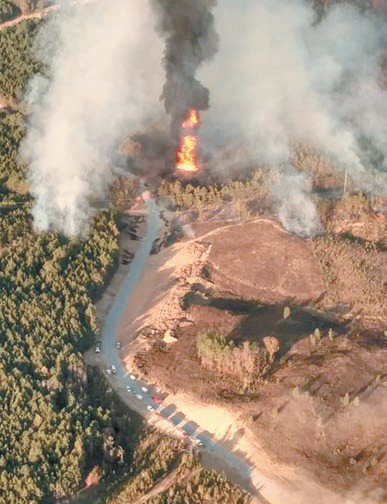 Fifteen years ago an increasing number of local residents found themselves in the middle of a battle against a gigantic corporation. They feared defeat could mean disaster for their bucolic way of life.

They won the fight, but the envisioned disaster did eventually occur for others nearby. The local protestors stopped Colonial Pipeline from traversing Blount County, but the then already existing tentacle in Shelby County has now suffered two recent ruptures.

On Sept. 9 of this year, according to al.com, a state surface mining inspector discovered a pipeline leak off County Road 91 in rural Shelby County. That breach leaked anywhere between 250,000 gallons of gasoline by Colonial Pipelines estimate to over 335,000 by state officials cited in the story.

On Oct. 31, an equipment operator reportedly hit the pipeline and sparked an explosion that killed one on the scene with another dying on Nov. 22, according to an OSHA release. Four others reportedly suffered severe burns resulting from the explosion and subsequent fires (above).

With those disasters and recent local courthouse demonstrations against DAPL (the Dakota Access Pipeline), The Blount Countian has opted to revisit the 2001-2002 local campaign and gauge sentiment among some for the DAPL protestors. While some of the then pipeline opponents have died or become incapacitated, the newspaper reporter contacted five who agreed to comment for the article. One declined an interview. The 2001-2002 fight

When word emerged in mid-2001 of Colonial Pipeline’s desire to construct a line with Talladega and Nashville terminuses which would run through Blount County, various individuals and entities grew concerned over the impact such might have on the area. The county commission, school board, Blount County Water Authority, Blountsville and Oneonta utility boards, Blount County EMA, Oneonta Fire Department, local ALFA and other groups expressed their opposition.

Individuals jumped into the fight, fearing events similar to those recently seen in Shelby County, such as contamination of water sources and the threatened use of eminent domain to take private property to benefit a private company. These individuals organized, with key assistance from retired local college professor Dr. Jack Avery, and launched efforts through local student letter-writing campaigns and federal legislators to halt the proposal.

Former state representatives Elwyn Thomas and Jeff McLaughlin sponsored bills, requiring significant safeguards for any pipeline location and attempting to limit eminent domain. While their bills made it through the Alabama House of Representatives, they could not get out of senate committees.

The roughly year-long fight saw Colonial shelve the project in an announcement on June 6, 2002. Most who fought the battle believe their efforts won the day. One, who chose to remain unnamed, contends the fact the path lay through Redstone Arsenal caused the pipeline’s death. Others identified Alabama Sen. Richard Shelby’s opposition as a key factor. Shelby incidents responses

Asked of feelings over the fight, all interviewed expressed no regret for their efforts. Their key concerns lay in the points echoed above with varying degrees depending on their particular attachment to the land affected or to broad concerns over the environment as a whole.

Brooksville certified volunteer firefighter Jan Bodine took no comfort in the fact that some of her fears were realized in Shelby County. She would have preferred the leaks and deaths not occurred.

“They [the Shelby County occurrences] were a great loss in lives and damage. [The] damage to the land wasn’t minimal. It will have to be cleaned up, but part of that can’t be. It’s a shame that that happened.”

McLaughlin, of Guntersville, and Blountsville resident Karen Smith echoed Bodine in referring to the incidents as “heartbreaking” and of their feeling of “sorrow.” Both also noted that Colonial’s past record had motivated them partly for the fight.

“We found Colonial had a history of poorly maintained lines,” commented Smith, a realtor in Arab.

Practicing attorney McLaughlin similarly noted, “Colonial’s track record is not great. None [of the pipeline operators] are perfect. Colonial is below average, in my opinion.” He went on to explain that one of his primary motivations at the time was protecting the aquifer and other Marshall County water sources. DAPL affinity

Other than Lambert Blakely, who professed a lack of knowledge on the situation, all interviewed empathized with the Lakota Sioux who are presently fighting efforts to build a pipeline through their lands.

“I feel that the Indian tribes of our nation suffered enough. I can sympathize,” reveals Bodine. “They, as I, hold land and water as a precious commodity; that’s our existence. I feel they should have the right to deny having that proposal come through their tribal land.”

“I understand the concerns of those opposed [to the DAPL]. It’s on a much larger scale than here,” commented McLaughlin. He compared the differences in a tanker spill and a pipeline rupture. “The volume of scale is mind boggling. The [potential] amount of damage is unbelievable. Tanker spills may be cleaned up, but I’m not sure what you have in a pipeline. I’m not ‘anti’ every single pipeline [however].”

DAPL opponent Sara Rose, while not involved directly in the 2001-02 effort, has organized local demonstrations against DAPL. She speaks of the Lakota term, mni wiconi, translated as “water is life.”

Beyond the question of violating Native-American tribal land rights and disturbing burial grounds, the DAPL proposal includes laying pipe under the Missouri River. That river provides “life” for much of the country.

In the Colonial fight, Avery had shared a story of dye placed in springs along the Marshall-Blount county line appearing a short time later in foundation water holes at the Birmingham Galleria construction. Parallels between the two fights offer some sobering room for thought.