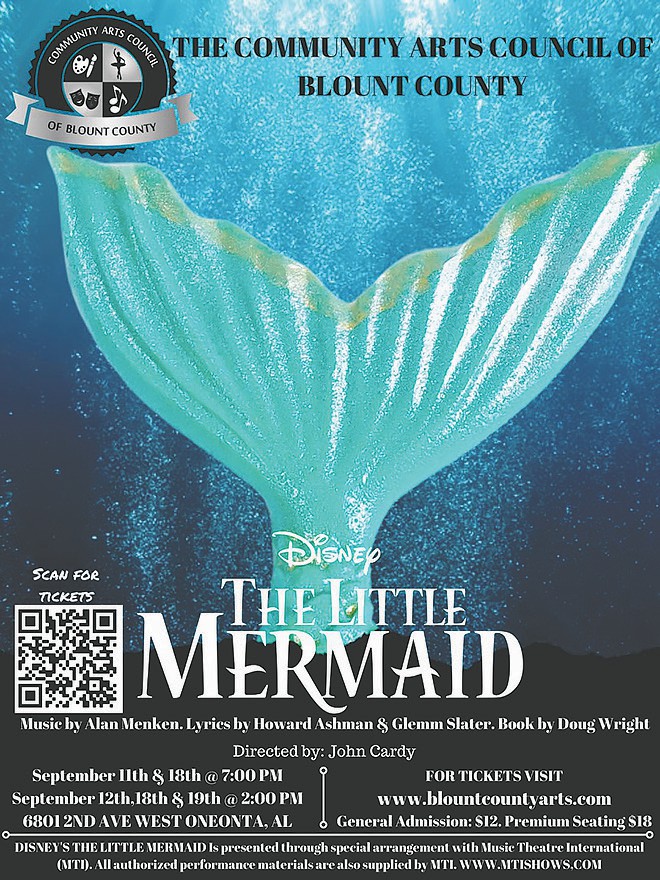 Theatre goers are in for a busy weekend with not one, but two shows celebrating their opening nights. The Community Arts Council of Blount County and the Covered Bridge Players will each be bringing entertainment to the Blount County and Oneonta communities, but in completely different ways.

While the Community Arts Council of Blount County will be performing Disney’s classic “The Little Mermaid” on their stage, the Covered Bridge Players will be honoring the 20th anniversary of Sept. 11, 2001, with true stories from Ground Zero in the docu-play “110 Stories” by Sarah Tuft.

The 1989 Disney film “The Little Mermaid” has made a big splash in the hearts of many, and Community Arts Council director John Cardy says the musical is very similar to the film, but is also different in a lot of ways.

“It’s the same story you know and love, featuring all of your favorite characters and songs from the classic film,” Cardy said. “But, it also throws quite a few surprises your way including extra scenes, subplots, and some new songs written by the original composers specifically for the musical. I think the audience will feel right at home with the classic story, but still have that feeling of, ‘Oh wow, that’s new!’”

Cardy said he’s excited for audiences to see how much hard work has gone into this production. “From the acting to the set to the costumes — all are completed by the hands of incredibly talented people right here in Blount County,” he said. “I’m ready to see the audience relax and take their minds off their everyday troubles and live in a world where mermaids still exist, even if for just a few hours.” 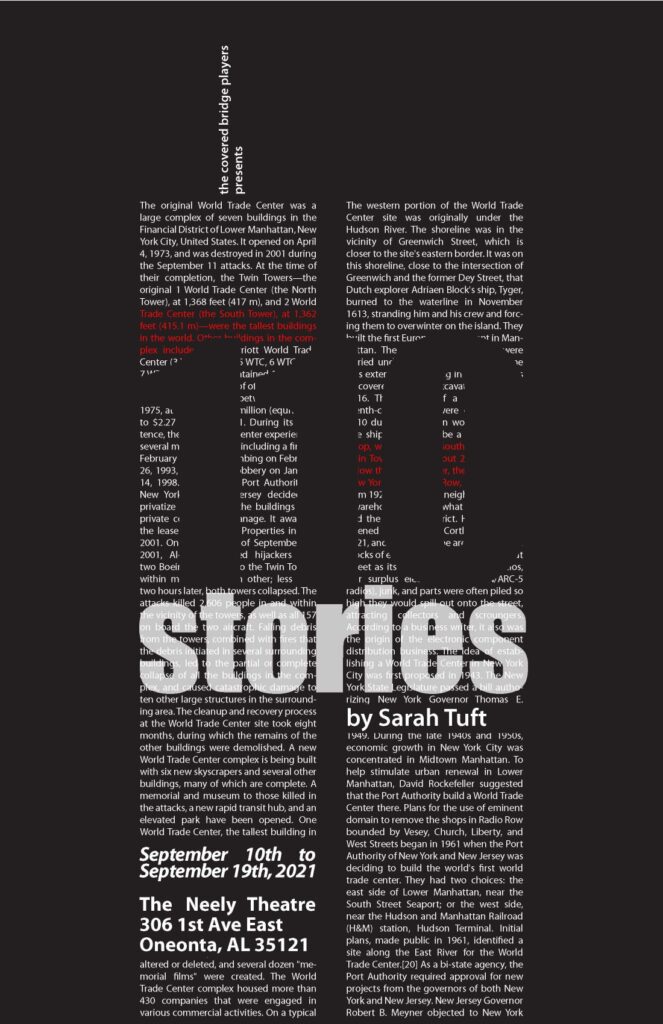 Most who were old enough to remember can tell you the story of where they were on Sept. 11, 2001. Now, hear true stories from real people at Ground Zero before, during, and after the 9/11 attacks on the World Trade Center. The Covered Bridge Players Board of Directors say they believe this docu-play is a small way for their theatre to honor the 20th anniversary of the Sept. 11 attacks and those who lost their lives and everyone who was affected then and still now.

“After we discovered this play, there was really no question that we needed to perform it,” said Covered Bridge Players president Allison Pearman. “It would be powerful no matter when it was performed, but to be performed on the 20th anniversary of the event is something so poignant.”

“110 Stories” takes us back to that fateful day. As explained through the play’s synopsis, “From the first crash at the Towers to a last goodbye at Ground Zero, “110 Stories” by Sarah Tuft takes us through 9/11 as told by those who were there. Their unflinching, freaked-out, and occasionally funny accounts take us back to when 9/11 was unimaginable, capturing the shock and horror of the day as well as the resilience of New York City in its aftermath. “110 Stories” memorializes Sept. 11 by humanizing history to reveal our innate compassion.”

Director Kevin Roland emphasized the importance of bringing these true stories to life. He said, “These are real people’s stories. It isn’t fictional. All of the words are straight from the people who actually witnessed one of the most horrific days in our country’s history. We always say ‘Never Forget,’ and this is our way to honor that sentiment.”