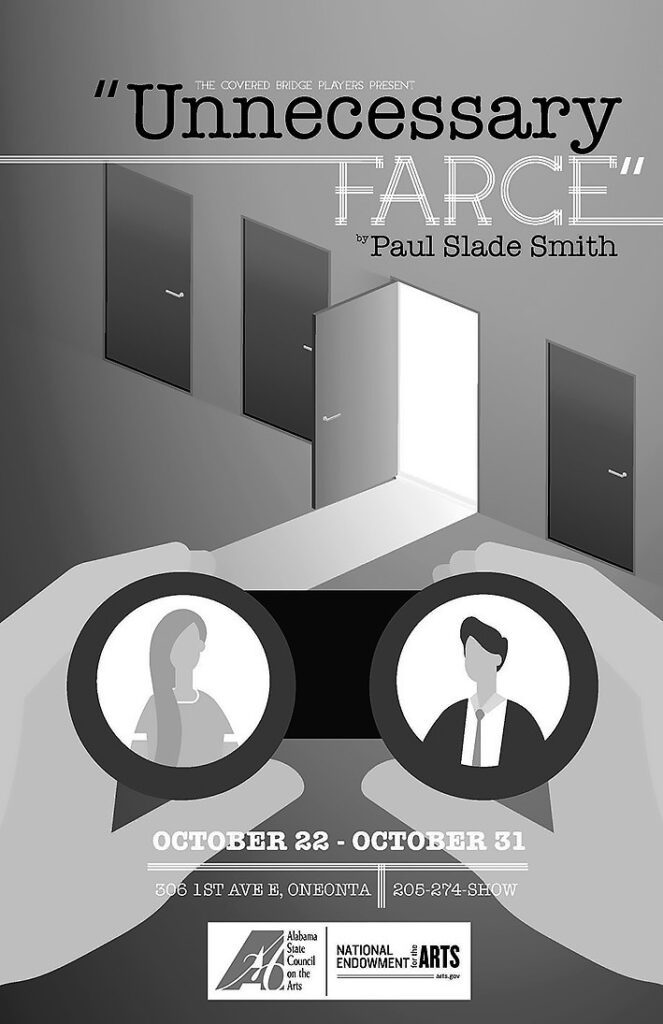 Mystery and laughter abound in the theatre world this weekend. The Covered Bridge Players continue their run of “Unnecessary Farce” by Paul Slade Smith, and the Community Arts Council of Blount County opens for a one-weekend run of “Blithe Spirit” by Noel Coward.

The Covered Bridge Players already have one weekend of shows under their belt and are seeing incredible success with their performances. Tickets for all initial showings of “Unnecessary Farce” sold out before the first show even opened, so due to the immense popularity of the show, the theatre group added a Sunday, Oct. 31, performance at 7 p.m., and it sold out within hours.

“We are so grateful for the amazing support we’ve received from the community,” says “Unnecessary Farce” director and Covered Bridge Players vice president Lee Alexander. “We had a lot of people who still wanted to come see this show, so we decided to add another performance. Then, when that show sold out, we were blown away. All we can say is a huge thank you to everyone who has supported us. We do what we do because of you, and we will continue to produce the best performances we can!” 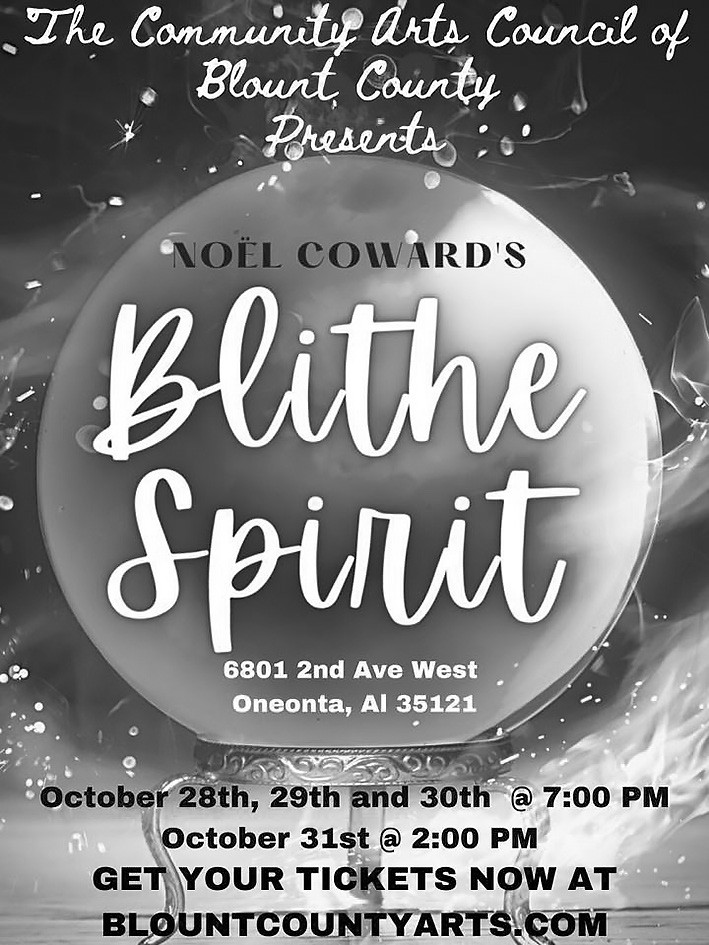 The Covered Bridge Players’ program/project has been made possible by grants from the Alabama State Council on the Arts and the National Endowment for the Arts, a federal agency.

“The story is timeless and gives us a distinct insight into the flaws of human interactions and the shortcomings we have all had in relationships,” says “Blithe Spirit” director Meagan Cardy.

“Blithe Spirit” is a comic play by Noel Coward. The play concerns the socialite and novelist Charles Condomine who invites the eccentric medium and clairvoyant Madame Arcati to his house to conduct a séance, hoping to gather material for his next book. The scheme backfires when he is haunted by the ghost of his annoying and temperamental first wife Elvira after the séance. Elvira makes continual attempts to disrupt Charles’s marriage to his second wife Ruth, who cannot see or hear the ghost.

“This is a show that has fascinated me for a long time,” says Cardy. “It’s hilarious. Charles, the main character, opens a Pandora’s box of sorts when he unknowingly summons his first wife back from the beyond. I have always admired the wit and sarcasm of Noel Coward’s work. I knew casting would be difficult because there had to be this very specific quiet charm in Charles Condomine, and that actor also has to carry the comedic timing and energy of a farce. Ben Marazzi brought all of that energy and charm in his audition. He has such great chemistry with both of his female romantic leads.

“I also knew casting Elvira would be difficult. You have to both love and hate her. Michaela Slocum really brings that. She is such an alluring character and I have loved watching Michaela bring that sophistication and appeal to life.

“And the show needs the groundedness of Ruth Condomine and Hannah Taylor does such a great job. She has the delightful spirit that really rounds out our unworldly love triangle. This story has been around since the 1940s. Some of the language is antiquated but the story has remained and continues to be performed worldwide. I think partly because of people’s fascination with life after death. And who doesn’t love a good love triangle rom com?”

“Blithe Spirit” opens this Thursday with a performance at 7 p.m. and continues this weekend with Friday and Saturday performances at 7 p.m. and ends with a Sunday show at 2 p.m. To purchase $10 tickets visit blountcountyarts.com. The theatre group performs at 6801 Second Avenue West in Oneonta.