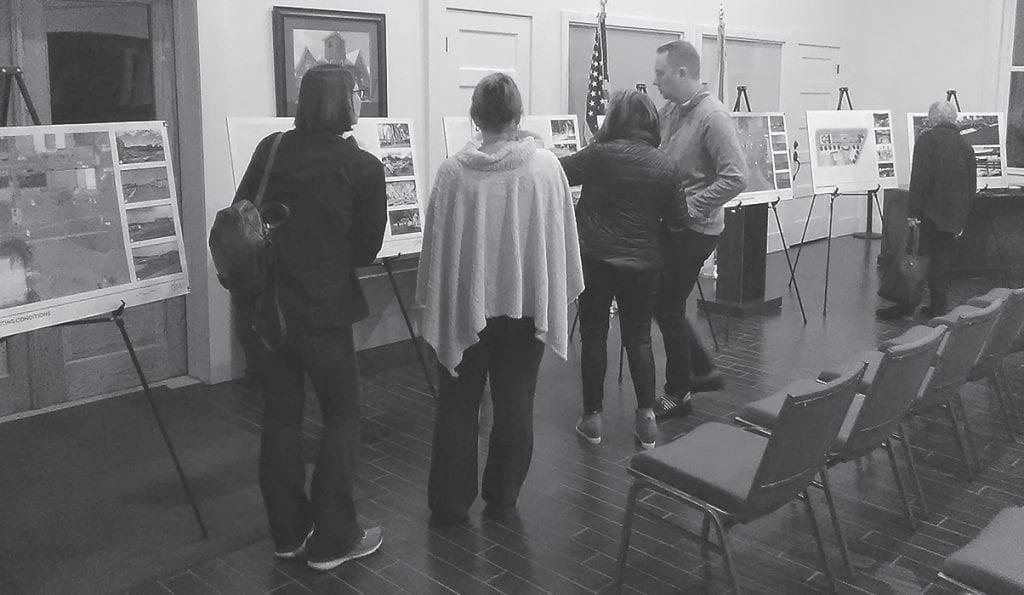 Following last week’s regularly scheduled meeting, the Oneonta City Council held a work session to gather community input on local revitalization. Around a dozen residents gathered at The Little Brick Church for what was the first in a series of meetings to discuss the city’s efforts to revitalize Oneonta.

City manager Ed Lowe kicked off the meeting by telling the group, “Our quality of life is good, but it’s not stable.” He explained that without industries and more businesses bringing tax dollars into the town, the whole community will suffer and decline. Lowe said the city had started working several years ago to “recreate the downtown area,” but the concept must be expanded to an area much larger than just “local.”

Describing what he calls “the quality of life triangle,” he said the development could include a proposed amphitheater situated between the senior center and library in the 100 block. Balancing the downtown portion of the project is a proposed covered pavilion referred to as “Railroad Market,” denoting the historic relevance of the space where train cars once stood before the closure of the railway system.

The Railroad Market would be located in front of the Oneonta Utilities building and offer a space for recreation, a farmer’s market, and other community events. Completing the triangle would be a 3.5-mile walking trail that could make its way through Oneonta, including the Agri-Business Center. Lowe noted that the state of the center “is still up in the air” and no one is sure of its future.

Lowe said the city has hired Goodwyn, Mills, and Cawood architects and the council hopes this first work session is “a place to start the conversation, positive or negative. We need to know what the community thinks and we need plenty of input. We want to make sure these projects have as much daily-use capabilities as possible.”

Jan Reed Ross with the design firm said the amphitheater park plans call for the use of a lot of sandstone for which the area is known. Pointing to a rendering, she explained that stone with grass separations would be used as seating areas without the use of hot paving.

Trees and directional placement of the stage would help buffer noise from the residential community and plans can include a splash pad or playground. The proposed stage area would have a storage room, restrooms, and a lighting/sound system.

“This is a golden time for play areas and splash pads because manufacturers have become so creative in their designs,” she said. “These are the kind of outdoor areas that attract young people and this is a growing national trend. This is a perfect small town with a great quality of life.”

She explained that the proposed Railroad Market, with a recreated platform, is an upgrade to the present farmers market with the addition of an actual train engine and large cover for it and the market area. “The structure would compliment the engine” she said.

Lowe added, “Now is the time to move forward. Because of our history and the surrounding coal mining history, there are funds available for un-reclaimed mining projects and economies related to the loss of mining.” Financial sources could include the Appalachian Regional Commission, EPA, and ALDOT.

“We want to use as much grant money as we can and we have a lot of ideas to incorporate clean projects that can generate money while protecting our streams and wetlands,” he said. “It’s time to invest in ourselves.”

During the regularly scheduled council meeting, the council approved the rezoning of Judith T. Camp’s and Don T. Camp’s adjoining properties from light industrial to residential.

The Oneonta City Council meets at 5:30 p.m. on the second and fourth Tuesdays of each month.