This is a story about how a locally designed and manufactured product – a solar powered charging station for mobile devices – is meeting a critical need in Puerto Rico, where electricity is still unavailable and/or unreliable much of the time, even now, more than a year after Hurricane Maria devastated the Carribean island.

The charging stations enable mobile devices to be recharged using power from the sun, captured by solar panels and providing low-voltage charging capability in the absence of conventional electricity. The photos show the most basic model installed in two different towns in Puerto Rico – Naranjito (right), pop. 30,000, and Gurabo (left), pop. 46,000 – where a total of 18 poles with their attached charging boxes and plug-in ports were installed in some of the hardest hit and most isolated communities throughout the island, both on the coast and in the mountains. (A more elaborate version of the product attaches the pole to an attractive metal bench for use in tandem in locations like parks, libraries, shopping centers, campuses, and other public areas. Bench units are installed at Oneonta Public Library, the downtown gazebo in Oneonta, and at Palisades Park locally.) Each pole unit provides ports for charging up to 10 mobile devices simultaneously. The units were designed three years ago by David Hornsby of Hornsby Steel in Cleveland and manufactured in Blount County by its subsidiary Sun Charge Systems, Inc. 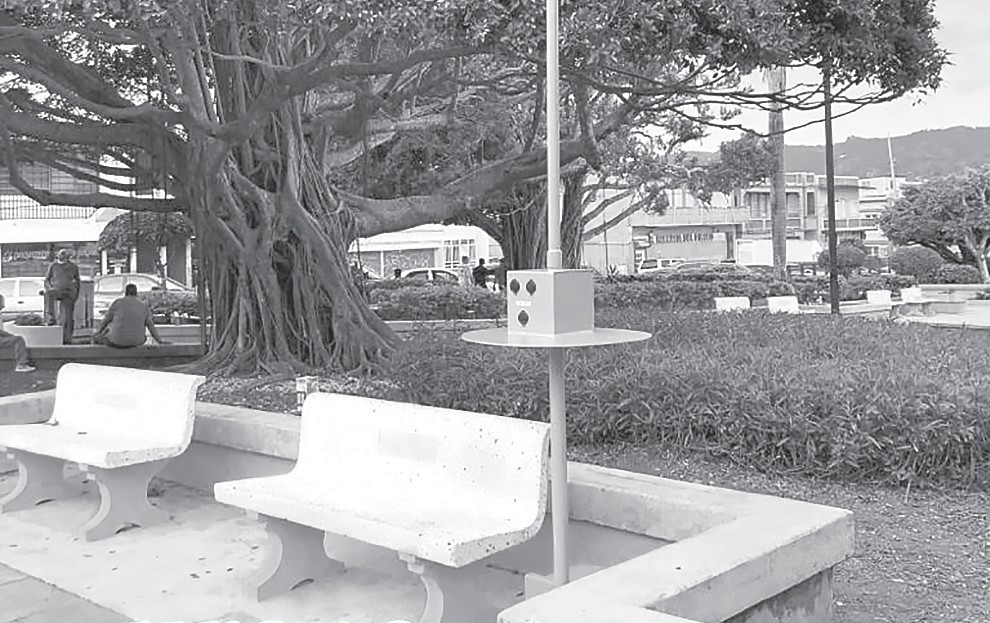 The story of how the Puerto Rico project developed is fascinating, even inspirational. It started with a couple of Native American friends who recognized from their own experiences on isolated American Indian reservations the crucial need for communications – for police, emergency responders, and citizens – in the infrastructure-devastated island. Fueled by frustrations with the U. S. government’s tepid crisis response, and through Internet research, they discovered the existence of the perfect solution – solar-powered charging stations for mobile devices – to address the problem.

They then enlisted the aid of a whole network of friends from other tribes and professional contacts in other countries to create a fund-raising organization that quickly raised $30,000 for communications relief via 18 charging stations purchased, donated, and shipped to Puerto Rico this fall. Recognizing the humanitarian relief aspect of the effort, Sun Charge Systems made the 18-pole order available to the purchasing consortium at its cost of manufacture. The simple-to-assemble charging stations were installed in Puerto Rico in a matter of days in late October.

“We’ve heard that since their installation the charging stations stay full with people using them, and others standing around waiting for their turn to charge their devices,” said Sun Charge Systems national sales director Donny Ray. Ray said the product is beginning to attract national and international attention in the market, and the Puerto Rico application may add further to its reputation. The company has sales representatives in 32 states and Canada, with the prospect of further substantial orders in the pipeline, he said.