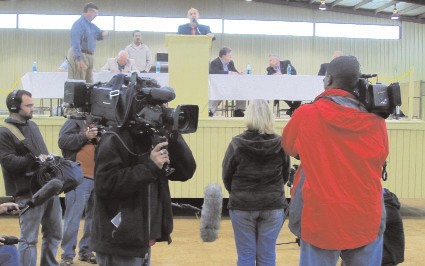 Cameras snap and whir as Teresa Smith, tomato grower from Chandler Mountain, pleads for immediate action from three legislators on the panel beyond to address severe labor problems created by implementation of the state’s tough immigration law.

A meeting organized by area tomato growers and billed as a regional rally for agricultural growers and suppliers affected by the state’s new immigration law produced a turnout of about 200 last Thursday at Oneonta’s Agribusiness Center.

The immigration bill has created a serious labor shortage for local growers as undocumented workers failed to appear to harvest fall produce. Agricultural suppliers of seed, fertilizers, and farm equipment have experienced an accompanying domino effect.

State representatives Elwyn Thomas, R-Oneonta, Jeremy Oden, RCullman, and Blaine Gallaher, RGadsden, told the crowd they would do all they could to help, but holding out little hope of a timely resolution of the labor problem before the next planting season.

The impact on the $40-billion annual agriculture industry, the state’s largest, and especially on local growers who must have hands-on labor to harvest and pack produce, is pronounced, though lessened this year by its implementation late in the season. Much of this year’s crop had been harvested before workers began to migrate to states with less strenuous immigration laws. Impact worse next year

The true impact will be felt drastically next year, according to some who spoke Thursday, unless lawmakers develop immediate solutions to the impending labor shortage for the entire season. Decisions on next year’s crop – how much to plant, even whether to plant at all – must be made now, speakers emphasized. They can’t justify financial outlays required now in the face of uncertainty over whether labor will be available to harvest.

Growers were mostly pessimistic about the prospect of farm work being shouldered by out-of-work Alabamians, one saying that using out-of-work urban residents to harvest crops had been a “complete flop.”

Growers said a possible solution may be offered by a “blue card” guest worker program now under discussion at the national level. Most said the existing “green card” guest worker programs are unmanageable for produce growers because of cost, onerous record-keeping requirements, unworkable delays in scheduling, housing requirements, and red tape generally.

The “blue card” program, if pursued, would create a pilot program to legalize illegal immigrants who have already worked in this country in agriculture for at least 150 workdays (at 5.75 hours per day) over two years. The card would give workers temporary legal status and would allow them to travel in and out of the country without experiencing lengthy immigration delays. Quotes from participants

Mel Wade, Southern States Co-op: “Thirty-four percent of our sales are from tomato farms, and that doesn’t count any of the fruit and vegetable farmers, so this represents a problem. Our producers are telling us,‘We don’t know what we’re going to do, so we can’t tell you what to order.’ This hasn’t been a disaster this year. But growers don’t know what they’re going to do next year.”

Jeremy Calvert, tomato/peach grower, Cullman County: “For us it’s all about survival. When you’ve got a family to feed, and a five-generation farm to run, and weather to deal with – you’ve got a lot on your shoulders. They talk about wages paid to farm workers – if these workers hustle they can make good money – maybe more than we do. And as for benefits and insurance – I don’t have benefits and hospital insurance provided for me. Why do we hire immigrant labor? Because they’re good, they’re dependable, and they get the job done. Right now, we need certainty about the labor supply. Without certainty, we can’t do anything next year.”

Keith Smith, sweet potato farmer, Cullman County: “I’ve heard a lot of talk. None of it’s any good. I’ve got a few Hispanics, and they do twice as much as so called out-of-work Alabamians.”

Craig Payne, Snead Ag, with four stores covering much of north Alabama: “You’ve heard of ‘trickle down?’ We’re seeing it at Snead AG. Vegetable farmers need large equipment – 180 to 200 horsepower tractors – because of the short harvest time frame. The order lead time is long for large tractors – up to six to eight months to get large equipment in. Y’all need to know what to plan for next year, and we need to know what tractors we need to order. We in the industry don’t want any special consideration. We just want it to be fair and legal.”

Brett Hall, state Agriculture Commissioner’s office: “Everybody wants to figure out a solution and get this behind us. We’re going to fix it and do whatever we have to. You wanta see a dying breed? Look out over this audience (of aging farmers). They provide food and fiber for the world. When they’re gone, there’s nobody coming along to replace them, and we’re going to want’em back.”

Rep. Elwyn Thomas (speaking of delays in government worker programs): “You can’t plant a crop of squash, cucumbers, or tomatoes and have a labor force show up two weeks late to harvest it. If you do, you’ve missed the boat. Some of our legislators can’t understand that.”

Teresa Smith, tomato grower, Chandler Mountain: “Most farmers want blue cards. We’re hoping you support that. If we could get skilled Americans to work four or five months out of the year, we would. But we can’t. We’re starvin’. Not only will we go out of business if you don’t help us, but other people are going to be starvin’ too. Our skilled workers are going to other states. When they go to other states, we can’t compete. Somebody should have thought of that. We have a few who are going to stay, but only a few. We had 20 people who came on an emergency basis to pick. Twenty people picked 120 boxes in a day. That’s fine, they did the best they could. But 20 good workers should pick 2000 boxes in a day.”

Gonzales said decision makers should have considered the law’s consequences much more carefully than they did, particularly in its impact on the labor force and on the lives of individual workers. He said emergency workers could not be trained in a short period of time to be as productive as seasoned workers. Becoming a productive worker requires seasons, not mere days of experience, he said. He said if he is not valued any more than the law’s obliviousness seems to indicate, he will not pick tomatoes any more, but will go elsewhere and change to some other line of work.

Zavala spoke about the loss of business at her store as a result of Hispanics’ leaving the area, saying the impact was drastic. She lamented the tragic effects on people’s lives as families have been disrupted and some split apart by the law and by the actions those affected have felt compelled to take to escape its consequences.