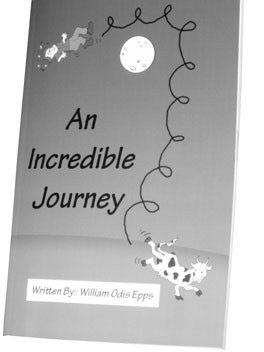 In his new book, An Incredible Journey, Oneonta’s William Odis Epps recalls with nostalgia personal and local events experienced in growing up in the rural Blount County during the Depression.

“It’s about days gone by and a way of life that is forever gone,” Epps says. “Families and neighbors are not nearly as close as they were back then.”

Children of the time were left to their own devices, their own fertile imaginations, and the things they found in the woods or around the barn, to occupy themselves in the era before television, computer games, cell phones, Ipods, and volleyball/baseball/basketball travel teams. Epps said that the constant refrain of his grandchildren “Paw Paw, tell us some of those old-time stories” is proof that something precious has been lost over the past several decades.

A sampling of chapter headings gives the flavor of the book: “Country boys, country toys”; “Castor oil, Black Draught, and sassafras tea”; “Two-room schoolhouse”; and “Grandpa’s ‘home brew.'” Epps says a major benefit of the book is the treasures of memory it will reopen for other people who lived through similar times in similar places.

“I never knew I was a writer,” said Epps, who spent much of his life as a bi-vocational preacher and insurance agency owner. His writing career was launched one Christmas when his daughter bought him a dozen writing tablets and his family told him to get to work writing the favorite stories he had told the grandchildren and others for years.

“I got started and I thought ‘hey, this is fun,'” Epps said. “Other people have told me they have stories of their own they’d like to tell, but don’t know how to write them. I tell them ‘grab a piece of paper and get started putting it down – see how it comes out.’ That’s what I did.” Epps said he has sold copies of the book in 10 states, mostly in the Southeast, as well as in Canada and Alaska.

Autographed copies of An Incredible Journey are on sale at Bennett’s department store downtown, at the Oneonta Public Library, the Blount County Memorial Museum, and at B&B Outlet on 231 South. Price is $12.50. Copies are also available from the author, who says he will autograph and mail them free of charge to addresses provided by buyers.