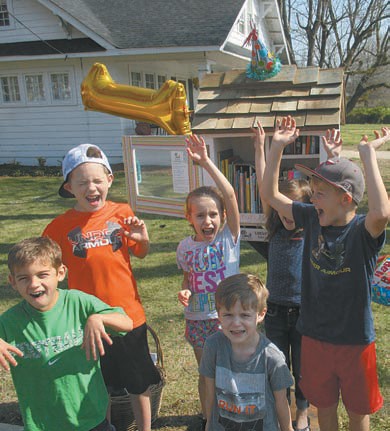 The Little Free Library at 400 Fourth Avenue East had a birthday last week. Note the festive birthday cap mounted on the roofline. The library, designed to look like a miniature rustic house and mounted on a post like a mailbox, has been in use for one year at the home of Kevin and Carrie Towns. Being stewards for the “take a book, leave a book” library has been an endlessly fascinating experience, Carrie said at the birthday party Friday attended by several children who have been users. First of all, the community has adopted the Little Free Library and its stewards wholeheartedly. “We met more neighbors in its first 24 hours than we did in three months of living here,” Carrie said. What else has she observed about it after a year? Well, usage has been steady at an average of about two or three users per day. (That works out to more than 1,000 a year, if you do the math. Carrie doesn’t make that claim, but, just saying…) It’s used by children and adults alike. Adult reading tends to run to non-fiction like how-to books and mysteries. For children, illustrated story books lead the parade. There’s no problem with having enough material. People tend to leave more books than they take, often leaving two, three, or four books – and sometimes a whole box – for each one taken. What’s the biggest reward so far? “We’ve met so many really neat people,” Carrie said. Any big surprises? “There are a lot of men readers. That has surprised me the most,” she said.