Lions, gators, and bears… oh my! 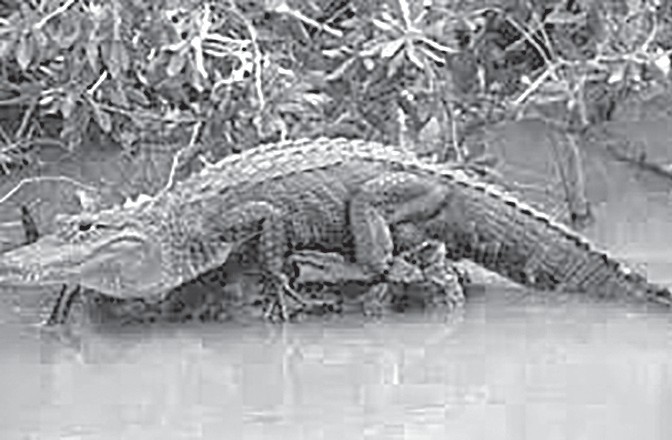 There has been only one reported alligator harvested in Blount County.

The title of this article might make you think it’s about football teams; however, I want to discuss these animals in relation to Blount County.

We all read the paper the other day about the black bear getting hit on U.S. 278. I truly hate that the animal met its fate in that way. In my life I have only seen five black bears and all of them were in Smoky Mountain National Park. In my 27 years in Blount County I have seen one territorial mark made by a suspected bear, and had reports of a bear in the Blountsville area captured on a game camera. The pictures were a couple years ago, so this is probably not the same animal.

When I first arrived in the county in 1992 or so, a bear was hit by two cars and killed in the Cleveland area on Ala 79. There is no doubt that black bears pass through the county on occasion. There is a building population in the Little River Canyon National Preserve area so I expect to see more bear activity in the future.

Two bears killed in a 25 year span documents the fact that black bear do visit the county on occasion. The largest population of black bears is in the Washington and Mobile County area, where they have a large expanse of habitat in the Tensaw delta. It is illegal to harvest a bear in Alabama.

Do alligators live here? Absolutely! About 1997 or 1998 officer Cliff Robinson (game warden at the time) called and said, “I have a report of an alligator in a pond on Straight Mountain.” I had talked to several commercial tomato growers who told me about the gators in Inland, but being the skeptic I am, I had my doubts. Even when Robinson told me that it was indeed a gator, it was hard to believe.

How did a gator make it to a pond on the Moody farm off Airport Road? I don’t know. Maybe someone brought it home and turned it loose at some point. The gator was about three feet long from nose to tail. The more it was harassed by the officer, the wearier it became. It disappeared from the pond before it could be apprehended.

Fast forward two years and the gator is back in the same pond. I don’t know what it had been eating –cornbread, taters, peas, sliced onion, and a glass of sweet tea maybe– but it was much bigger. It was about 6.5 ft. long, big enough to take a small child or medium dog. I recommended to Robinson that he use the jug fishing approach to capture the beast, a gallon jug with a three-foot length of stout nylon attached to it and a treble hook on the other end.

Everything likes chicken, so that is what he baited it with. He captured the gator the first night and brought it home to his house on Carter Street, which is where I lived as well. We were all just amazed at that gator. He hissed and growled a bit but his mouth was taped, so we weren’t too afraid. That’s the closest I have ever been to an alligator.

While waiting for the Alabama Department of Wildlife and Fisheries to decide what to do with the animal, it escaped from Robinson’s barn. It hit the stream next to Lucky’s and followed it under U.S. 231 and took up residence at the fishing pond at Spring Valley Beach. The Gilliland family noticed the gator, and notified Robinson that it was in their pond and needed to be removed ASAP.

Once again, the more it was harassed the more difficult it became to catch. July 4 was right around the corner and you can only imagine what would have happened at SVB had the gator been spotted. It had to be removed. Robinson dispatched the gator with a .22 on the evening of July 3. At about 6 a.m. on July 4, Robinson called me to help recover the animal and get it out of the area. I was glad to assist and indicated that I would like to keep the skull for a mount. He looked at me and said, “You know it’s illegal to own a gator part in Alabama.” I believe he would have written his own mother a ticket, but after all, the law is the law.

I think Spring Valley Beach should erect a monument to the alligator. After all, it is the only gator that I know of that has ever been harvested in Blount County.

I have had lots of reports of mountain lions and black panthers since I have been in the county. As a matter of fact, my administrative assistant swears she has seen a black panther. I am not going to argue, but I will point out that there has been no documented wild lion track, scat, or DNA evidence since 1956 when one was killed in Tuscaloosa County. Not one has been hit by a vehicle.

There are about 150,000 deer hunters hitting the woods in Alabama on a regular basis and each one has at least three game cameras out to ensure they are not wasting their time. That is about 600,000 eyes looking at whatever moves in the woods in Alabama. That’s almost 9,000 in every county. There is just no evidence that they’re here.

There has never been a large black cat on the North American continent! There is a black phase coyote and I took the picture with my phone. I also have one report from a respected individual in Cherokee County that he had a mountain lion under his tree stand and it had an orange collar on it. Maybe it was a lost pet; I don’t know! I guess I need to move to the “Show Me” state.

I do believe in Santa, however. I have pictures and there were at least two in the Oneonta Christmas parade. Happy New Year!