Lemonade with a purpose

What impact can money from a lemonade stand make? For children in a Filipino orphanage, the money can make a world of difference.

Seven-year-old best friends Whitney Marquard (left) and Annie Dennison (right), who attend Lester Memorial United Methodist Church, want to make that difference. In just their second year of selling lemonade, they made $601.50 for the orphanage to use as they see fit.

It is anticipated that the money raised this year will go towards buying school shoes. According to Beverly Anderson, who is a member of the eight-person mission team that left for the Philippines Sunday, Filipino children have to pay to go to school.

The Lester Memorial team works with the Kids International Ministry, a ministry that supports a children’s home of more than 55 children. Approximately eight years ago, the ministry founded the Quatro Christian School that allows the children to attend free of charge; however, all students are required to wear uniforms and black shoes. 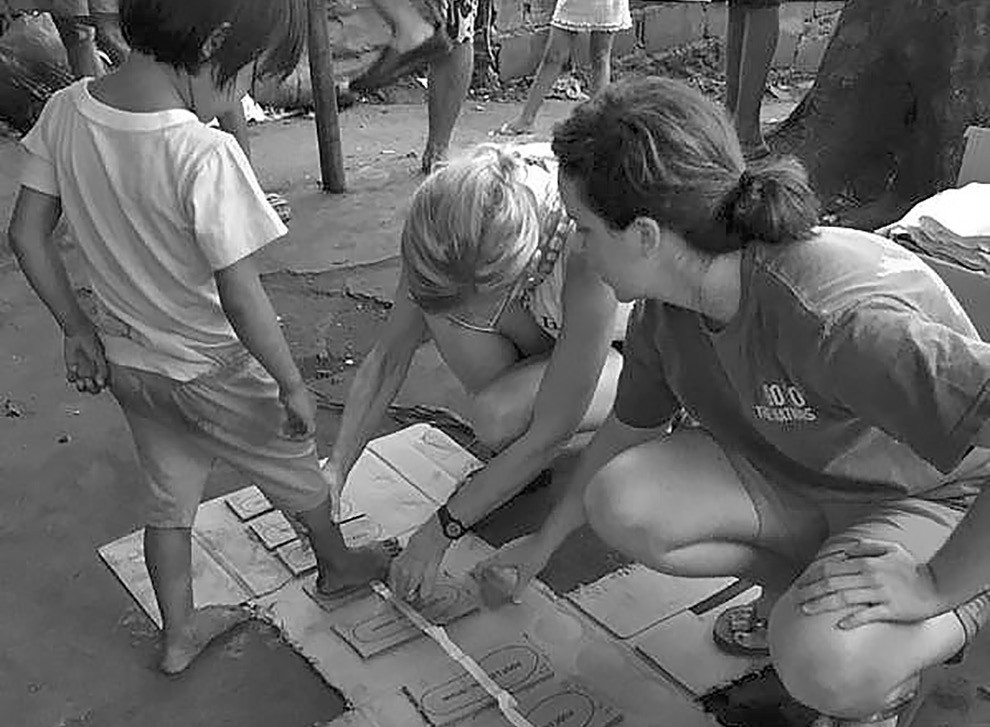 A Filipino child is fitted for shoes. -Beverly Anderson

This year’s contributions will help make sure the children have shoes so they can attend school. Anderson said, “We want to help provide an opportunity for the children to attend school and break the cycle of poverty.”

When asked why they want to be a part of the Philippines ministry, both Annie and Whitney had some very valuable things to say.

Annie, whose mother came to the United States from the Philippines in 2001 said, “I want to do this to serve God. I’ve been to the Philippines two times and I saw how poor the people are.” While visiting last year, Annie was at McDonald’s and witnessed a small child begging for food.

According to Annie’s mother, Liza Dennison, it is very common to see children begging for food. She pointed out that anyone who chooses to help those begging is subject to having many approach them for help.

Whitney said, “We want the county to know that we are giving the Filipino children what they need because we love them. That is what Jesus wants us to do.”

Anderson has made all but one mission trip since 2012. During the yearly mission trips, the team does not usually have a set agenda.

Anderson said, “Being Type A people, we want to have a specific goal in mind, but we’ve learned to see what God has planned for us once we arrive. We truly pray before we go that God will prepare before us what He would have us to do and that our hearts will be open when we arrive to serve God and others in the Philippines.”

In addition to helping with specific needs, the ministry team holds Bible studies for both parents and children and has “feedings” for the children two times per day. Feedings occur when the ministry team makes a protein added porridge-like dish and serves it in the streets to the children. Kids from all around flock to the feedings with various containers to hold the porridge.

Other ministries include working at a pregnancy center, spending time with the children at New Faith Family Children’s Home, Bible studies with the Filipinos, and construction around the children’s home and school, when needed.

The ministry team understands that many of the Filipino citizens are suffering from poverty. Each member of the team carries 50 pounds of supplies in one of two suitcases they are allowed to take on their flight. Things such as clothing, flip-flops, toiletries, candy and medical goods can be found inside their supply suitcase.

Anderson praised the support the ministry team has received over the past few years. She said, “This community has been amazing year after year by supporting our team, becoming a part of the team, and supplying for the needs of the Filipino people.”

According to the girls, they plan on holding the Third Annual Lemonade Stand for KIDS of the Philippines event next year. They have proven that serving lemonade with a purpose definitely makes a positive impact for those in need.