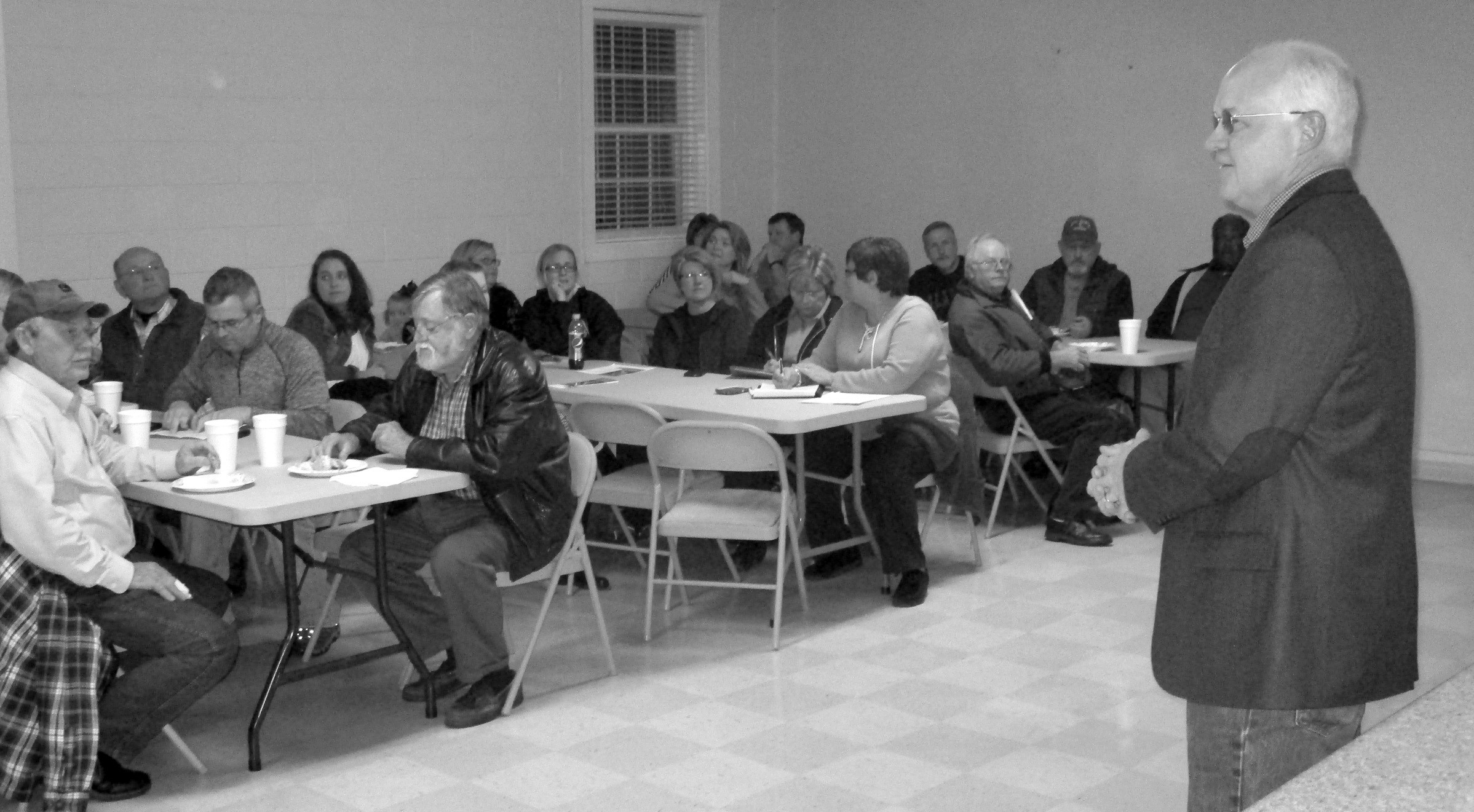 District 34 Rep. David Standridge speaks to the audience at a legislative update session sponsored by the West Blount Chamber of Commerce. About 50 attended the meeting held at the Hayden Community Center. Other members of the Blount County legislative delegation also spoke.

• state budgets: the education budget is in “a little better shape” than last year, but the general fund is not; it will be a substantial challenge again this year, maybe not as bad as last year.

• teacher pay raise (in response to question from audience): bill in question provides for 5-percent pay raise, but ties the raise to removal of tenure for teachers and institutes performance appraisal for teachers based on student test scores;“I couldn’t support it as written,” Standridge said. ”I have a lot of concerns about it.”

Teacher Renee Dailey in audience volunteered that teachers would like to be included in discussions of matters affecting them, citing Common Core as an example.

• District 2 Commissioner Allen Armstrong spoke from the audience about the 1- cent sales tax, saying he voted against it because his district got the smallest amount of funding from the proposal, yet it has the largest population and second greatest number of road miles in the county; Standridge replied that it is the delegation’s job to draft legislation allowing county citizens to vote on the proposal, and that the delegation has not yet worked through all of the issues involved.

Shelnutt addressed issues that will concern the state Senate.

• special sessions: he said he hopes the Legislature will reach consensus this year without the need of costly special sessions; thinks it will be possible since at this time there are no new tax proposals pending.

• lottery bill: bill on the table provides for people to merely vote in favor or opposed to a state lottery; has no details as to how it would be organized, or no provisions earmarking how funds will be used; he opposes it on that basis, but might favor a bill providing details on how it would be organized and dedicating proceeds to scholarships and related educational purposes.

• 5-cent gas tax: session this year will feature a big push on this bill, but scope and outlines of debate not yet clear.

• gambling: it appears comprehensive gambling legislation is off the table this year.

Rowe concluded the meeting with a report on a number of matters that concern her.

• Rickwood Caverns: she accepted a copy of a petition with more than 500 signatures to reopen Rickwood Caverns to routine operations; she reported that the state parks department has offered concessionaires an opportunity to bid to manage the park; requirements stipulated for concessionaires by the state are unnecessarily onerous, she said, and need to be relaxed to make it feasible for prospective concessionaires to be able to operate at a reasonable profit.

• lottery: serious weakness of current bill is that it doesn’t specify who makes the rules governing the lottery.

• combining the education and general fund budgets into a single fund; she said she is not in favor of combining them.

5-cent gas tax: situation is statewide deterioration of roads and bridges; problem is inadequate funding to address upgrading across the board; formula governing how large a share counties get is too stingy; she wants counties to get larger share; also wants allocation to be determined by road mileage.

• cost-cutting: said state budget can still be tightened – “a lot,” she emphasized – adding that Legislature may impose zero-based budgeting where each department cannot simply request a percentage increase in its current budget, but must prove the need for its entire operation, not just the need for more funding to offset inflation or for new programs.