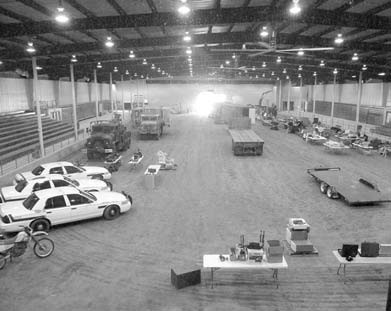 The law enforcement auction held last Saturday at the Blount County-Oneonta Agri-Business Center was, by all indications, a considerable success. Exact totals of proceeds were not available but estimates were that both city and county law enforcement cleared more than $30,000 apiece from the sale of surplus and confiscated property. Not only that, said Blount County Sheriff’s Department Operations Officer Tim Kent, but they cleared out a great deal of storage space they desperately needed.

So what all did they sell? Well, they sold everything you see in the photo and then some, according to agri-business director Chase Moore. Which included, besides the obvious military and civilian vehicles, the following: office equipment, portable generators, tools of all kinds, bicycles, four-wheelers, unimogs, appliances, chainsaws, camo clothing and gear, electric/electronic gear, a portable airplane hanger air conditioner, a landmine detector, etc. The list is illustrative, not exhaustive. There was a lot of stuff, including beaucoup items up against the wall in the foreground that you can’t see in the photo. They sold all of that, too.