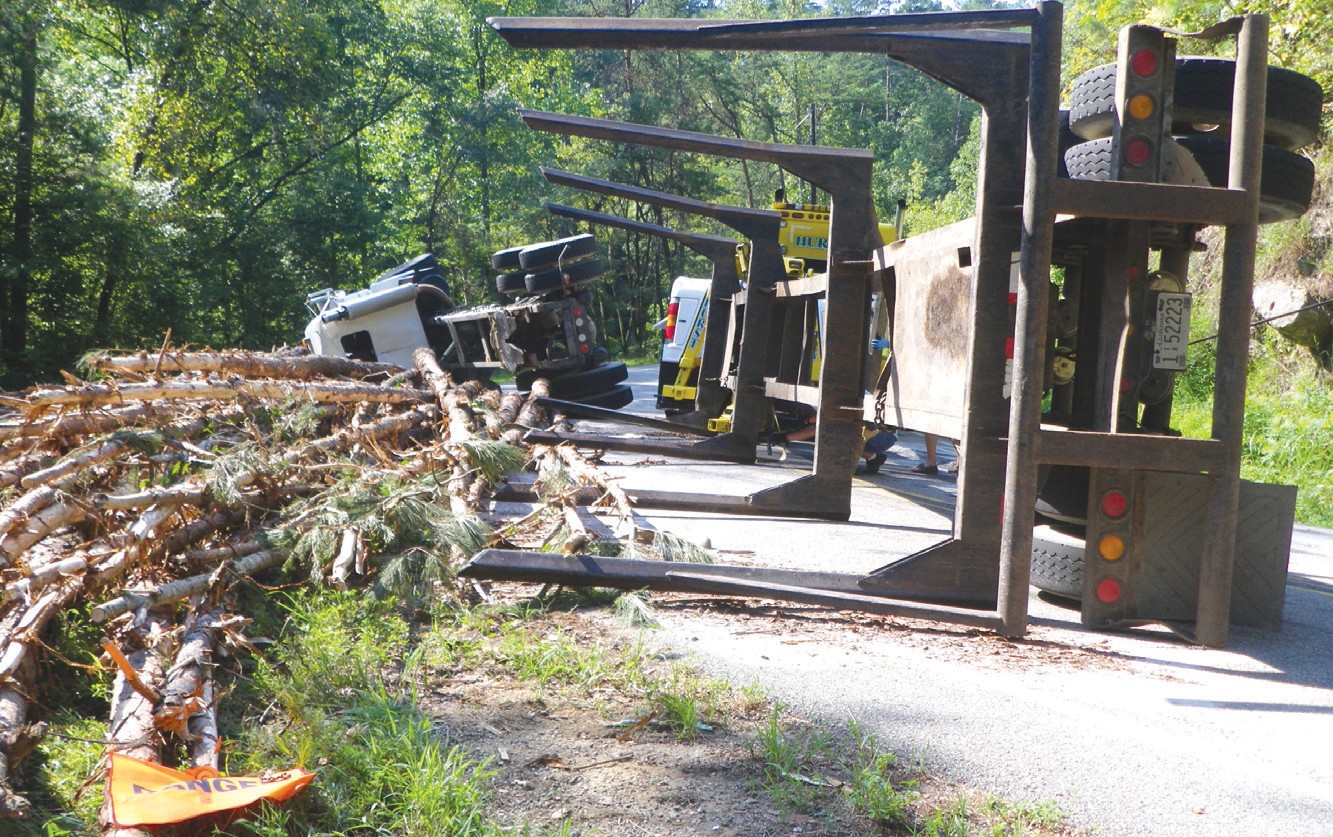 This logging truck overturned about a month ago on county highway 5 in west Blount County, knocking down a county guardrail in the process. It was thought the truck was traveling too fast to make the curve at the bottom of a hill. District 1 Commissioner Allen Armstrong said citizen safety is one of the considerations behind the imposition of weight limits on county roads. “You wouldn’t believe how many calls I get from people complaining about logging trucks going too fast and tearing up the roads. We’re just lucky no one was in the oncoming lane when this truck turned over,” he said.

Todd Palmer, a Tuscaloosa businessman and owner of more than 34,200 acres of Blount County timberland, has filed suit against Blount County for what the complaint calls “arbitrary and capricious weight restrictions” on three county roads. Also named in the suit as defendants are District 1 Commissioner Allen Armstrong and county engineer Richard Spraggins.

Plaintiffs in the suit, besides Palmer himself, include Palmer’s forester Eric Martin, his logging contractor Jerry Crawford, and the Alabama Forestry Association. The parcel that is the subject of the lawsuit contains approximately 2032 acres, with all but 33 acres located in Blount County, along its southern boundary with Jefferson County.

The lawsuit, filed in Blount County Circuit Court, asks for a preliminary and permanent injunction to prohibit the county from enforcing the weight restrictions, which it says have been posted at limits below those allowed by Alabama law. It also seeks to claim compensatory damages from the county and punitive damages from Armstrong and Spraggins, plus attorney’s fees.

The three roads in question all border Palmer’s land. The roads are Deans Ferry Road, Commissary Road, and Elvester Road.

Weight limits posted on the roads were for 20 tons or 40,000 pounds. Plaintiffs maintain the limits reduce the load that can be carried over the road from 44 tons or 88,000 pounds to less than half that.

“Clearly, the arbitrary actions of one commissioner and the county engineer have caused me considerable harm,” Palmer said. “I have a substantial investment in this property and now they are keeping me from selling the timber and essentially making my investment worthless.”

County attorney Tom Prickett commented on the case. “The complaint in this case is 20 pages long, but it boils down to this: Do loggers have an unlimited right to damage or destroy county roads at taxpayers’ expense? Put another way, does the county commission have the right to put weight limits on a county road based on the capacity of the road to bear weight? Common sense tells us that companies should be responsible citizens and take responsibility for their actions. Often this is not the case, and there have to be restrictions, in this case, by the county commission since they are responsible for maintenance of the roads.”

District 1 Commissioner Allen Armstrong said the roads were posted because of damage being done by loggers operating without permits and without observing such common-sense precautions to protect roads as placing drainage pipes in ditches and cleaning deposits of mud off road surfaces after logging operations are concluded. Absence of pipes or use of logs in lieu of pipes to cross ditches makes ditches clog up causing roads to flood. In addition, leaving layers of mud over blacktop causes both the road surface and the subsurface roadbed itself to deteriorate because it keeps them wet, making them even more subject to damage by heavy loads.

In the lawsuit, plaintiffs say they have, in fact, been denied permits to use county roads needed to access timberland. According to informed sources, they were denied access to only one single-lane residential road, which at 10 feet wide was considered too narrow to allow ingress and egress by logging trucks. Permits were granted for every other request made by the plaintiffs, though not always within a matter of 24 hours, according to sources.The complaint claims other districts in Blount County respond to requests for permits within 24 hours. Another commissioner says that is not the case.

In another section, plaintiffs say restricted roads were posted only six days after Palmer obtained a permit from Blount County allowing him to access the county road to remove his timber. “The manner and procedure in which these weight limits were imposed was arbitrary and capricious and directed solely at the Plaintiff’s (sic) in this cause to deprive them of valuable property rights,” the complaint reads.

“Blount County, in pursuing its statutory authority to manage its infrastructure, has gone so far as to infringe on Mr. Palmer’s constitutional rights to the free use and enjoyment of his property. At some point, we have to draw the line and stand up for what’s right,”said the Alabama Forestry Association in a news release on the filing.

The case pits the interests of county taxpayers who pay for road construction and maintenance against the right of an individual to use those roads to develop his property and make a profit, with accompanying benefits to himself and others.