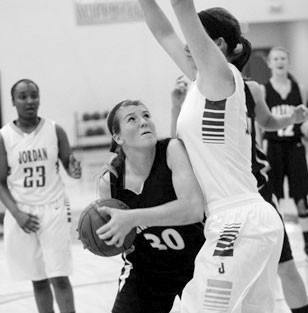 Hayden’s Katie Parr muscles her way inside against a Mortimer Jordan defender.

The Hayden Lady Wildcats got a huge game from senior forward Katie Parr and knocked off region foe Mortimer Jordan 42-38 in the championship game of the Hayden Christmas Tournament Saturday night.

Parr dominated the paint and finished with 21 points and 23 rebounds against the Lady Blue Devils. Sophomore guard Sharley Miller drained a 3-pointer with just 23 seconds to play to give Hayden the lead for good after a furious Mortimer Jordan comeback.

Parr was fouled in the final seconds and hit one of two free throws to seal the win. 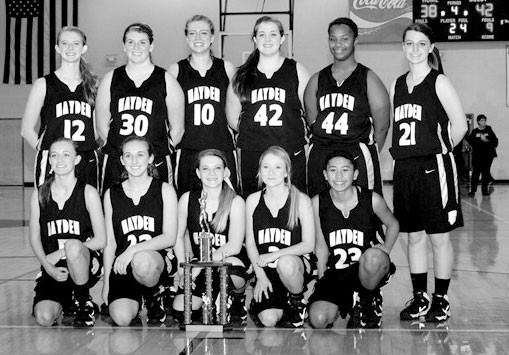 The Hayden Lady Wildcats improved to 12-4 after winning their own Christmas tournament.

Hayden (12-4) got nine points from Evin Bibb while Miller pulled down nine rebounds.

The Blue Devils advanced to the finals with wins over West Point (65-31) and Springville (44-33). Hayden knocked off Hueytown (53-41) and Guntersville (54- 47) to reach the championship game. Lady Redskins fall in semifinals at Lauderdale County

The Oneonta Lady Redskins saw the competition get progressively tougher in the Northwest Alabama Christmas Tournament.

Oneonta blew out 5A Muscle Shoals (55-34) behind Destiney Elliott’s 26 points in the first round and then got a last-second layup from Maddie Boyd to knock off 3A No. 5 Mars Hill Bible 40-39 in the second round.

However, in the semifinals, the Lady Redskins never got the offense going in a 49-37 loss to 2A No. 1 Woodland.

Oneonta played Belmont in the thirdplace game Monday night while Woodland met Lauderdale County (15-0, No. 1 in 3A) for the championship. Cleveland wins two of three

In the Brindlee Mountain Christmas Tournament, the Cleveland Panthers opened with last-minute replacement Fyffe the Panthers ran out to a 10-5 lead after one quarter.

Fyffe came back to lead 20-17 at the half but a 19-9 advantage in the third quarter gave the Panthers a 36-29 lead after three quarters.

In the final period, the Red Devils couldn’t miss and the Panthers couldn’t hit as Fyffe put together a 12-0 run and went on to outscore Cleveland 31-9 in the quarter to win, 60-45.

The Panthers came back in the consolation bracket to beat 4A North Jackson 57-49 as Caleb Corder hit for 15 points. Terry and Khalil Johnson each had 14.

On the final day of the tournament, the trailed big (32-15) at the half but then rolled up 55 points in the second half to pull away from 4A DAR for a 70-63 win over the Patriots.

Terry fouled out early in the second half but the Panthers got 20 points from Corder and 13 from Trevor Yates in the win. Terry added 11 points while Johnson chipped in 10.