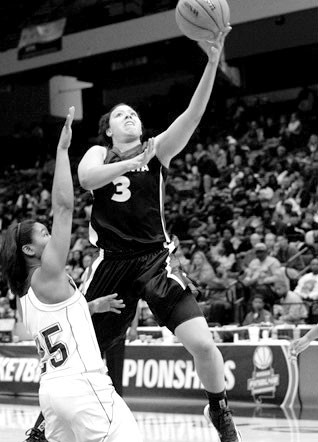 Destiney Elliott lays in two over a Clarke County defender.

It started with about a minute left in Saturday’s 4A title game.

Dimonique Sanders, the only senior on the Lady Redskin roster, plays basketball with seemingly all the enjoyment of a root canal. She is so focused that all you normally see is a scowl on her face.

Not this time, though.

With the clock winding down and Sanders on the bench with the other Redskin starters, the senior that shows no emotion was having a for-real, ants-in-yourpants, can’t-keep-my-feet-on-the-floor, kind of jitterbugging meltdown.

As the clock struck zero on the Redskins’ 53-39 demolition of Clarke County, Sanders and the rest of the Lady Redskins exploded off the bench with pure emotion. 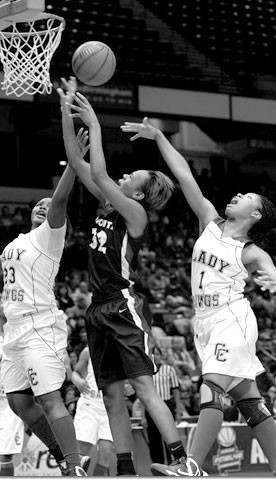 Dimonique Sanders scores despite the efforts of the Clarke County defense.

The win erased last year’s tough, season-ending loss to eventual state champion Jacksonville in the Northeast Regional final at Jacksonville State. That loss ended the Oneonta season at 34-1 but it also served as motivation for this year’s team.

The state title was the first for any Blount County basketball team. Thursday, Feb. 28 at BJCC No. 1 Oneonta 50, Dadeville 34

Oneonta settled into the familiar routine of testing their opponent in the first quarter. The Lady Redskins race out to a 9-0 lead just three minutes into the game but Dadeville took advantage of a cold streak by Oneonta and rallied to tie the game 10-10 after one quarter.

“I’ll try not to cry,” said Oneonta’s Amber Deline, when asked to talk about winning the state title. “These girls are amazing – they would do anything I asked them to. We won like we always do, with defense and rebounding. We don’t look great on offense sometimes but our defense and rebounding are always there.”

The second quarter proved to be the beginning of the end for the Lady Tigers. Oneonta outscored Dadeville 13-4 in the quarter and took a comfortable 23-14 lead to the half.

Dadeville coach Mitch Joiner thought his team might have the advantage inside with 6’1 senior Rae Williams in the post, but the opposite proved to be true. With Destiney Elliott collecting a game-high 21 rebounds, and Dimonique Sanders ripping down eight, the Redskins simply pounded the Tigers on the inside.

Oneonta (31-4) outscored Dadeville 19-14 and 8-6 over the final two quarters to post the easy win and advance to the title game.

Elliott piled up all kinds of numbers with 23 points, 21 rebounds, and three steals. Abby Blackwood had 11 points and Maddie Boyd added seven. Dimonique Sanders had five points and eight rebounds. Saturday, March 2 at BJCC No. 1 Oneonta 53, No. 3 Clarke County 39

The Lady Redskins had fallen into a groove of starting slow and then dominating the second and third quarters. Not this time.

Third-ranked Clarke County got out to a 4-0 lead but Oneonta ripped off the next 12 points in a row, including seven straight by Destiney Elliott. Clarke County hit a couple of buckets to close to 12-8 but Oneonta got a driving layup from Baylee Gibbs and a jumper by Elliott to close the quarter with a 16-8 lead.

The second quarter was more of the same as Elliott hit a long three-pointer and a 15-footer to give the Redskins a 21-8 advantage.

Abby Blackwood hit a putback with a minute left in the half and Oneonta took a 25-15 lead to the break.

The offenses came to life in the third quarter and the teams traded baskets for most of the quarter. The Redskins got out to 19-point leads on two different occasions (38-19, 40-21) but but the Lady Bulldogs closed the quarter with a 6-1 lead to cut the Redskin lead to 41-26 after three quarters.

Clarke County dialed up the pressure in the fourth quarter and began to cut into the Oneonta lead. After a three-pointer from Kiana Coates and free throws from Tanisha Chapman and Rachel Brownlee, the Bulldogs pulled within seven at 46-39 with just 3:31 to play.

The Bulldogs were within striking distance but the Redskins responded. Over the next two minutes got four free throws from Destiney Elliott, two from Dimonique Sanders, and another from Abby Blackwood while forcing Clarke County into four turnovers and four missed shots on the other end.

The 6-0 run ended the game and brought the Redskins a title.

Clarke County (28-5) got 22 points from Rachel Brownlee but no other Bulldog managed more than six.

Elliott, who averaged 26.5 points and 13 rebounds in the two games, was named the 4A MVP. Abby Blackwood and Baylee Gibbs joined her on the all tournament team along with Rachel Brownlee and Jordan Hollins (Clarke County) and Hannah Nichols (Madison County).

“We tried a couple of different things on her,” said Clarke County head coach Tori Johnson, “but, obviously, nothing worked. She was just bigger and stronger than anyone we had guarding her. She would back us down and get her shot (inside) or step outside. She is a heck of a player and they have a great team.” Oneonta head coach Amber Deline likes what she sees during Saturday’s 4A title game.