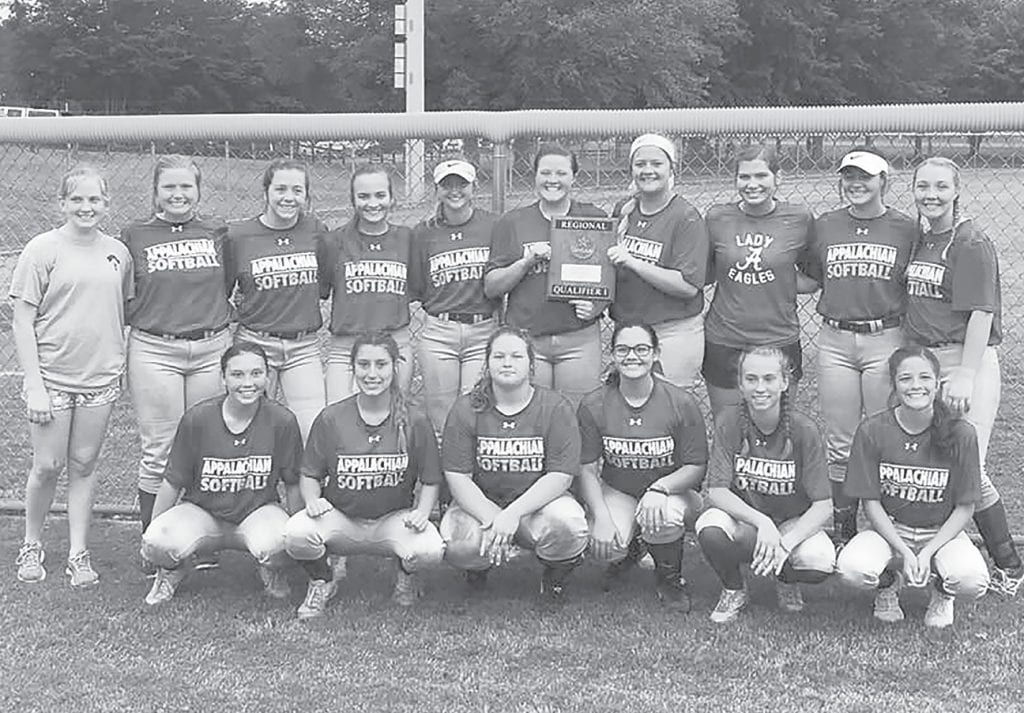 Appalachian (pictured at right) won the 1A West Central Regional after easily defeating three opponents. The victories advanced the Lady Eagles to the state playoffs in Montgomery.

They shut out Phillips 15-0 in game one. Ashley Maddox threw a complete game. She surrendered zero runs on one hit and struck out nine over four innings. Appalachian collected 12 total hits. Ashley Whittington led at the plate with three hits in four at bats and two RBIs.

The Lady Eagles defeated Meek 8-2 in their second game of regionals. There were four runs scored in the third and fourth innings. Zoe Payne homered in the fourth inning to advance the lead from 5-1 to 7-1. Appalachian tallied 11 total hits in the game. Whittington, Elise Maddox, and Reilly Lancaster had two hits each to lead from the plate. Maddox was the winning pitcher. She allowed two runs on six hits, struck out two, and walked one over seven innings.

The championship was no contest for Appalachian. They defeated Belgreen 14-1 in their final game of regionals. Whittington was the winning pitcher. She surrendered one run on six hits and struck out three over seven innings. The Lady Eagles collected 13 hits in the game. Jordan Henderson was 2-4 with six RBIs. She hit a double in the third inning and homered in the fifth. Payne and Kylee Davis were 3-4 to lead the Lady Eagles to victory.

The wins improved Appalachian to 24-7 for the season. They will play Kinston Friday, May 17, at 9 a.m., at Lagoon Park in Montgomery in the first round of the state playoffs.