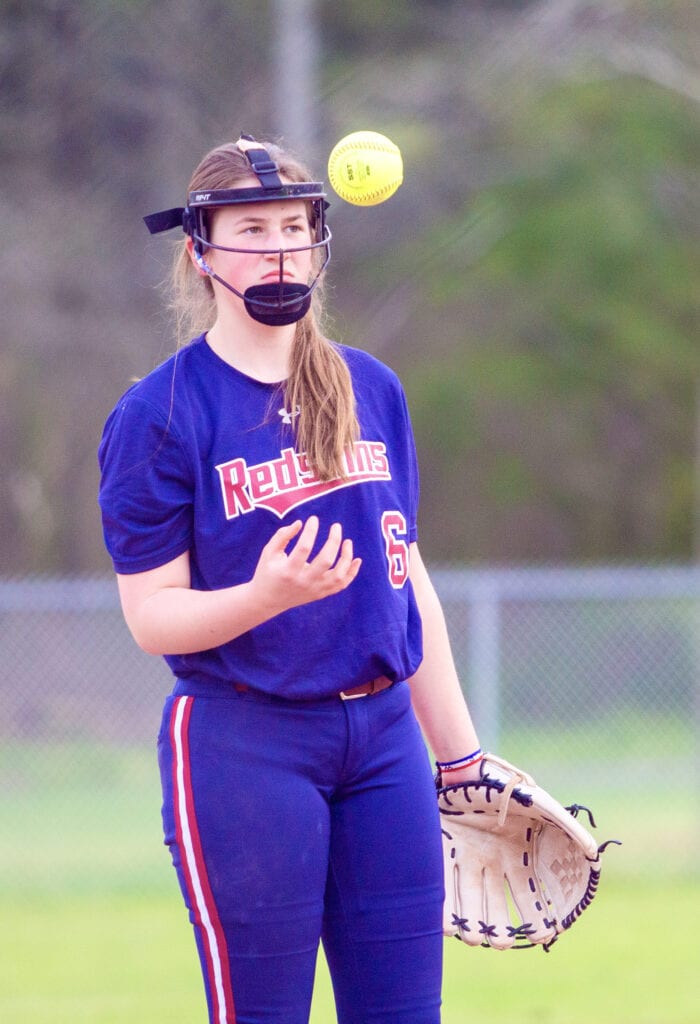 Before the county tournament got underway, most teams got a game in. Susan Moore and J.B. Pennington racked up a combined 26 hits and 27 runs in a 3A Region 13 matchup. Susan Moore scored three in their first at bat, but Pennington answered with three of their own to start the second inning.

The Lady Bulldogs then scored four runs in the bottom of the second and third to go up 11-3. They exchanged one run in the fourth, but the Lady Tigers started to rally in the fifth scoring three runs. They scored three more in the sixth and in the seventh to tie the game at 13-13.

In the bottom of the seventh, Sara Robinson led off with a line-drive to right field for a single. Alexis Molina doubled on a fly ball to center to get Robinson to third. Robinson scored the winning run on Jazmine England’s in-field hit sealing Susan Moore’s victory.

Robinson and England each drove in three runs with Robinson scoring two runs on two hits and England scoring one run on four hits. Molina and Karleigh Allison finished the game with four hits apiece. Allison scored four times while Molina drove in one and and scored three. Kadence Standridge scored three runs on one hit.

Jais Peek led the Lady Tigers at the plate driving in one on three hits for two runs. Summer Hawkins drove in one run on two hits and scored twice. Lessie Allison, Montana Martinez, Katie Chambers, Amber Hall, Katie Abbott, and Baily Dingler all had one hit. Lola Wood, Autumn Sansing, L. Allison, Chambers, and Abbott each drove in one run while Hall drove in two and scored twice.

The Lady Eagles tallied 14 hits in four innings to beat Victory Christian 18-1. Appalachian scored 10 runs in their first time up to bat. They added two more in the third and six in the fourth.

Sarah Metcalf and Taylor Woodard didn’t allow a hit and each struck out three.

The Lady Eagles host Fairview at 4:30 p.m. tomorrow and travel to VictoryChristianfora4p.m.gameon April 19.

Last week’s contest between the Lady Panthers and Lady Redskins featured two great pitchers who both got the best of their opponent for much of the game. Both pitchers threw complete games and each gave up only three hits.

The Lady Panthers, though, got a couple of runs out of their hits. In the bottom of the fourth inning, Trinity Sanders singled on a fly ball to center field, advanced to second on a Redskin error, and scored on Lesley Contreras’s outfield hit.

In the bottom of the sixth, Sanders singled again, this time on a fly ball to left field. Contreras reached on an error to get Sanders to second. Sanders took advantage of another Redskin error landing safely on third before Jannett Gonzalez drove her in.

This Friday, the Lady Panthers are scheduled to host the Lady Patriots in a 2A Region 10 matchup. Oneonta hosts Ashville tomorrow at 3:30 p.m. for a 4A Region 10 contest.

The Hayden Wildcats, ranked fifth in 5A, knocked off 4A’s top-ranked Curry 8-6 last week. Lindsey Smith scored the Wildcats’ first run reaching first on a grounder to left field and scoring on Becca Benton’s grounder to left field. Smith led off the third inning with a solo shot to left for Hayden’s second run.

In the top of the fourth, Curry scored twice for their first runs of the game. The game didn’t stay tied for long; Hayden scored five in the bottom half of the inning. Tinley Johnson led off with a walk followed by Kiley Weston’s bunt single. Up next was Miah Simmons who homered on a fly ball to center field putting the Wildcats back up by two. With two outs, Ansley Armstrong singled on a line drive to left field. Benton drove her in with a home run on a fly ball to center field.

Hayden’s final run came in the sixth. After Smith doubled on a line drive to left field, she scored on A. Armstrongs’ sacrifice hit to third. Curry made it interesting in the top of the seventh, scoring four runs before the Wildcats got the final out.

Simmons started and got the win for the Wildcats in the pitcher’s circle. She gave up six runs on seven hits through six and one-third innings. Painter came in for the save.

On Monday afternoon, Hayden was on the road against Center Point in a 5A Region 12 matchup. The Lady Wildcats got off to a quick start in the 16-0 victory scoring 10 runs in their first at bat. Simmons picked up another win while Emily Adkins got the save. The pitchers combined for a no-hitter.

The Lady Wildcats remain unbeaten in regional play. They host Cordova at 4:30 p.m. tomorrow in another region game.

Last week the Lady Hornets traveled to Walnut Grove for a 2A Region 11 game against West End. Locust Fork put one run on the board in their first at bat and never relinquished the lead for a 14-3 victory.

Locust Fork lead-off batter Hannah Payne started the game with a single fly to second and scored on Savannah Neely’s sacrifice fly. In the top of the third, Reagan Owen scored when Alivia Watkins tripled on a fly ball to left field. Neely then drove Watkins home.

In the fifth, Payne, Watkins, Neely, Alana Calvert, and Ava Hancock scored giving the Lady Hornets an 8-2 lead. West End got one run in the bottom half of the inning, but that’s all the Lady Patriots got. Locust Fork finished the game with another four runs in the sixth and two in the seventh.

In last week’s contest against Coosa Christian, the Lady Mustangs out hit Coosa Christian 16-2 and out scored them 19-4. Southeastern scored almost half of those runs in the bottom of the first. They added one more in the second, two in the third, and seven to close out the game.

The Lady Mustangs are scheduled for a 2A Region 11 game against Susan Moore tomorrow afternoon at 4:30 p.m.