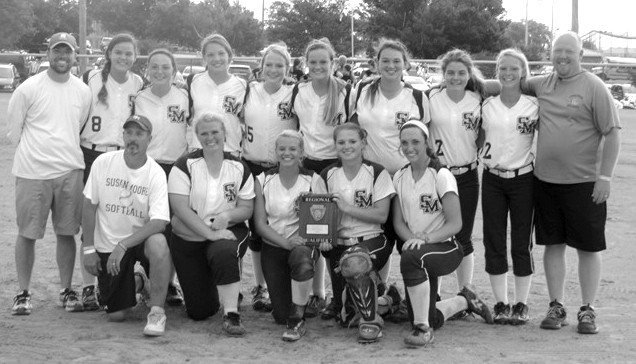 The Susan Moore Lady Bulldogs will meet No. 2 Pisgah Thursday at 9 a.m. in the state softball tournament at Lagoon Park in Montgomery.

Four teams from Blount County made it to regional tournaments but only one will advance to this week’s state tournament in Montgomery.

The Susan Moore Lady Bulldogs went 1-1 on the first day of the South-Central Regional Tournament at Troy last Friday. Forced to come through the loser’s bracket, Susan Moore rolled up four straight wins, including a 5-2 win over area nemesis Glencoe in the deciding game.

The news wasn’t as good for the other county schools.

The stay in the 1A North-Central Regional at Tuscaloosa proved to be a short one for both Appalachian and Southeastern.

Appalachian fell to South Lamar 13-0 in the first round and then was eliminated by Tharptown, 10-1.

Southeastern dropped a 15-0 decision to South Lamar in the first round. The Lady Mustangs played well in the second game but was eliminated by Belgreen, 8- 4.

The Oneonta Lady Redskins had a very good tournament in Tuscaloosa but the ending was certainly disappointing.

Oneonta opened the 4A bracket with a 12-2 pounding of Sardis Friday morning. Alexandria dropped Oneonta into the loser’s bracket with a 9-3 loss in the second game.

The Redskins came back Saturday and rolled over St. Clair County 8-2 and Lincoln 6-3 to advance to the deciding game.

Cleburne County led Oneonta 2-1 and 3-2 before the Lady Redskins scored to tie the game 3-3 and force extra innings.

Oneonta had the winning run at third base twice in extra innings but couldn’t come up with the hit. Finally, Cleburne County put together some offense and rallied for five runs in the top of the 11th inning to win 8-3 and clinch the state tournament berth. Susan Moore takes second at Troy

On Friday, Susan Moore opened the South-Central 3A Regional Tournament by hammering Leeds, 13-4.

Top-seeded White Plains blanked Susan Moore 5-0 in the second game to send the Lady Bulldogs to the loser’s bracket.

Susan Moore came back Saturday and the tournament run nearly ended against Piedmont. Trailing 6-3 in the bottom of the seventh, Susan Moore rallied for four runs to take a dramatic 7-6 victory and move on.

The Lady Bulldogs came back to take out Leeds 7-1 to set up a winner-take-all game against Area 7 champion Glencoe.

Against a team they had lost to four times on the year – twice in the regular season and twice in the area tournament – the Lady Bulldogs won the game that meant the most with a 5-3 victory that sealed the school’s first trip to the state tournament.

The top three teams in Class 3A survived the regional tournament round last week to advance to the state tournament this week at Lagoon Park.

No. 1 White Plains, No. 2 Pisgah, and No. 3 Winfield headline the 3A bracket and Susan Moore will get a shot at Pisgah tomorrow ( Thursday) morning at 9 o’clock.

Rankings didn’t mean much to the Lady Bulldogs last week at Troy. Susan Moore lost to top-ranked White Plains but knocked off No. 10 Leeds (twice) and No. 4 Glencoe.

Susan Moore will play either Catholic or Northside at 1:30 p.m.

Full brackets and other information are available at www.ahsaa.com.

The championship game is set for Friday at 4 p.m.