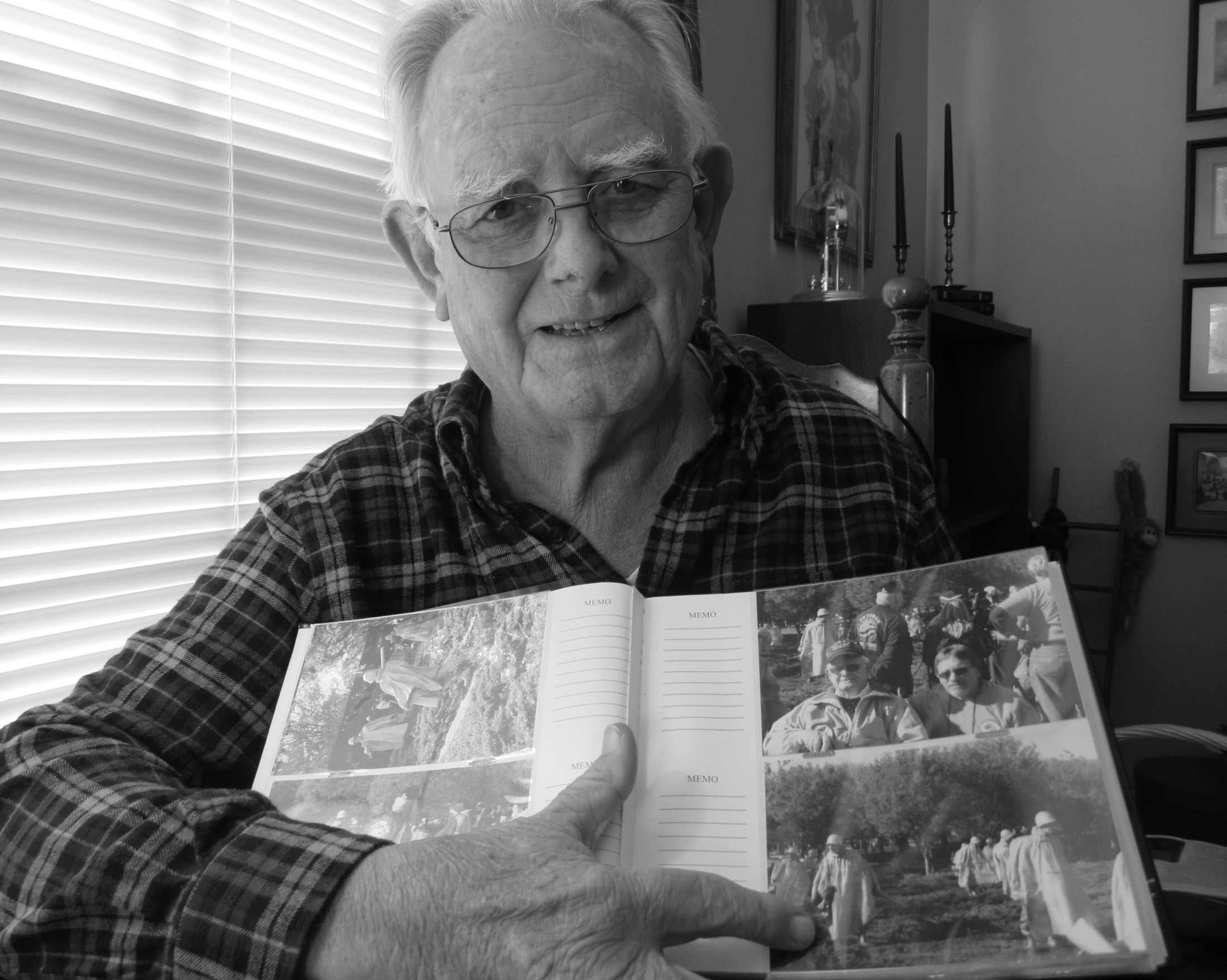 Don Fowler displays the memory album of photos from his Valor Flight trip to the Korean War Memorial. The lower photo he points to is reproduced on pg. A14. The top photo shows Fowler with guardian Robert Browder of Killen, who was assigned as guide to accompany Fowler throughout the day.

Don Fowler, a Korean war veteran now living on Straight Mountain, took a trip to visit the Korean War Memorial in Washington, D.C. a couple of weeks ago. It turned out to be the trip of a lifetime – first of all because he’d never been to Washington D. C. before. But more than that because it prompted him to relive a particularly vivid part of his life spent in Korea during the Korean conflict. 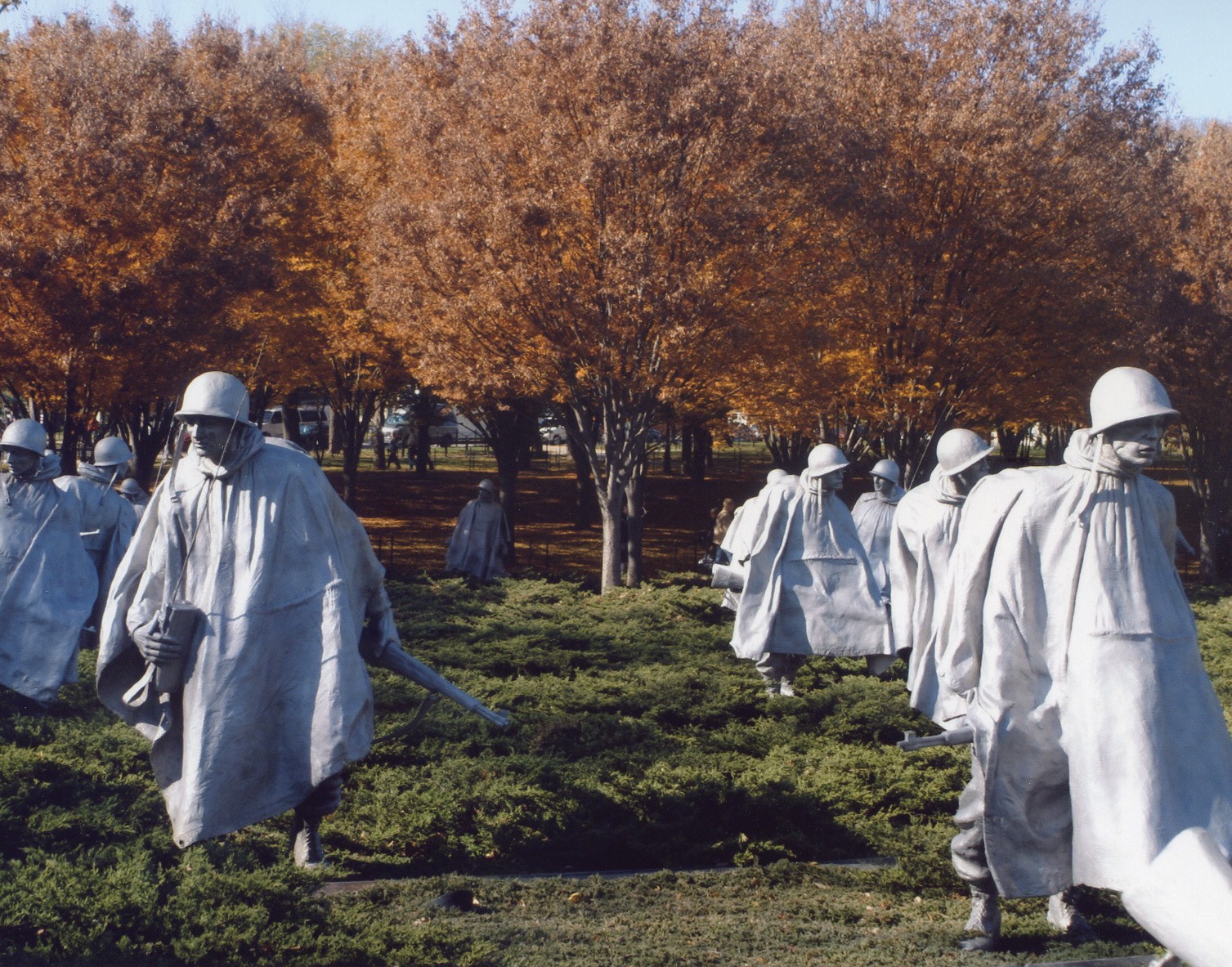 A company of U.S. soldiers from the Korean era appear to move in a ghostly, frozen-in-time formation through the Korean War Memorial park. From the men’s expressions and spread-out formation, the display reminds Fowler of a company of men moving through a minefield.

Fowler flew to Washington Saturday, Nov. 12, as a part of Valor Flight, a special visit to the Korean War Memorial arranged for more than 100 Korean War vets from the north Alabama area. He was the only member from Blount County.

The memories of the sendoff and the tour were poignant: the Rolling Thunder Patriot Riders who saw them off at the airport, the children at the memorial who came up to shake his hand, the solemn changing of the guard at Arlington National Cemetery, the sight of the White House and Pentagon through the eyes of a lifelong patriot making his first pilgrimage to the Capitol.

The Korean Memorial itself was evocative – a parklike area of about three-quarters of an acre dominated by the ghostly forms of infantry figures – statues in full gear and dynamic postures – who seemed to be moving across the park with oddly haunted expressions in a loose, spreadout formation. Ghostly figures moving through a minefield

“I’ll tell you what it made me think of,” said Fowler. “It looked like a company of men moving through a minefield – just the looks on their faces, and the way they were spread out like they tell you to do in a minefield, so if someone triggers a mine, the whole company won’t be wiped out. And they were wearing ponchos, just like in Korea. It rained a lot over there. It was just awesome. It brought tears to my eyes. It backed me up 61 years.”

Also moving was the five-foot wall of memories – not a black wall with the names of veterans engrav-ed like the Vietnam Memorial Wall, which they also saw – but a wall with scenes of Korea and GIs in various settings etched into the granite wall. The sight of a blind veteran feeling the images on the wall is similarly etched in Fowler’s memory.

But more than that, were the memories triggered of his time in the war itself: place names like Teague ( Tay-gue), Suwon, and Pyongyang came immediately to mind. Fowler served in the headquarters operation of the 5th Air Force Advance Group. It wasn’t an office job. He was in the field, often in a forward position trying to rebuild dirt landing strips into military airfields. That involved lengthening short strips of a quarter mile or less into mile-long runways, often reorienting them to prevailing winds and topography in the process. And doing it with little heavy equipment.

He sometimes found himself in the path of combat, like the time when he was assigned to guard duty during the beginning of an enemy offensive against the U.S. position. On that occasion he spent a night and morning calling in airstrikes against the oncoming enemy infantry. Building airstrips – by hand

About that rebuilding airstrips without heavy equipment: How did they do that? They did it with human labor. That was one of Fowler’s main jobs: to secure, train, and manage the native labor force that rebuilt the strips to a significant extent by hand, using long poles resting across their shoulders with baskets suspended on each side. Those were used to carry fill material from the hills into the rice paddies that were being invaded by lengthening the existing runways.

“The labor force was made up of old men and women. The other men were all in the army,” Fowler said. “There were even women with children on their backs hauling fill dirt. We paid the labor with fish, rice, and money, but mainly with fish and rice. They didn’t want the money. They wanted the food. There were times they were so hungry, I gave them double rations just to keep them healthy.”

Another vivid memory was the weather.

“We were outside 85 percent of the time,” Fowler said. “That was OK in the summer, but in the winter it was deadly. We didn’t get our winter clothing until after Thanksgiving. All we had was summer uniforms. Every stitch of clothing we had, we had on.”

Fowler said when GIs arrived in Seoul following their evacuation during the North Korean invasion, there were two lines at the center where they reported: one was for Thanksgiving dinner, and one was for winter clothing which had just arrived. The clothing line was by far the longer.

Many GI’s succumbed to the cold, and many others were left with lingering maladies, Fowler included. He was granted 20 percent disability due to the permanent effects of extended cold on his extremities.

“For a young man it was frightening, but – and this is not something I tell people very often – it was a lot of fun,” Fowler says, just a bit apologetically. “We were too young to be scared.”

Fowler was awarded the Bronze Star for “meritorius performance of duties, under adverse and often hazardous conditions,” in the words of his citation.