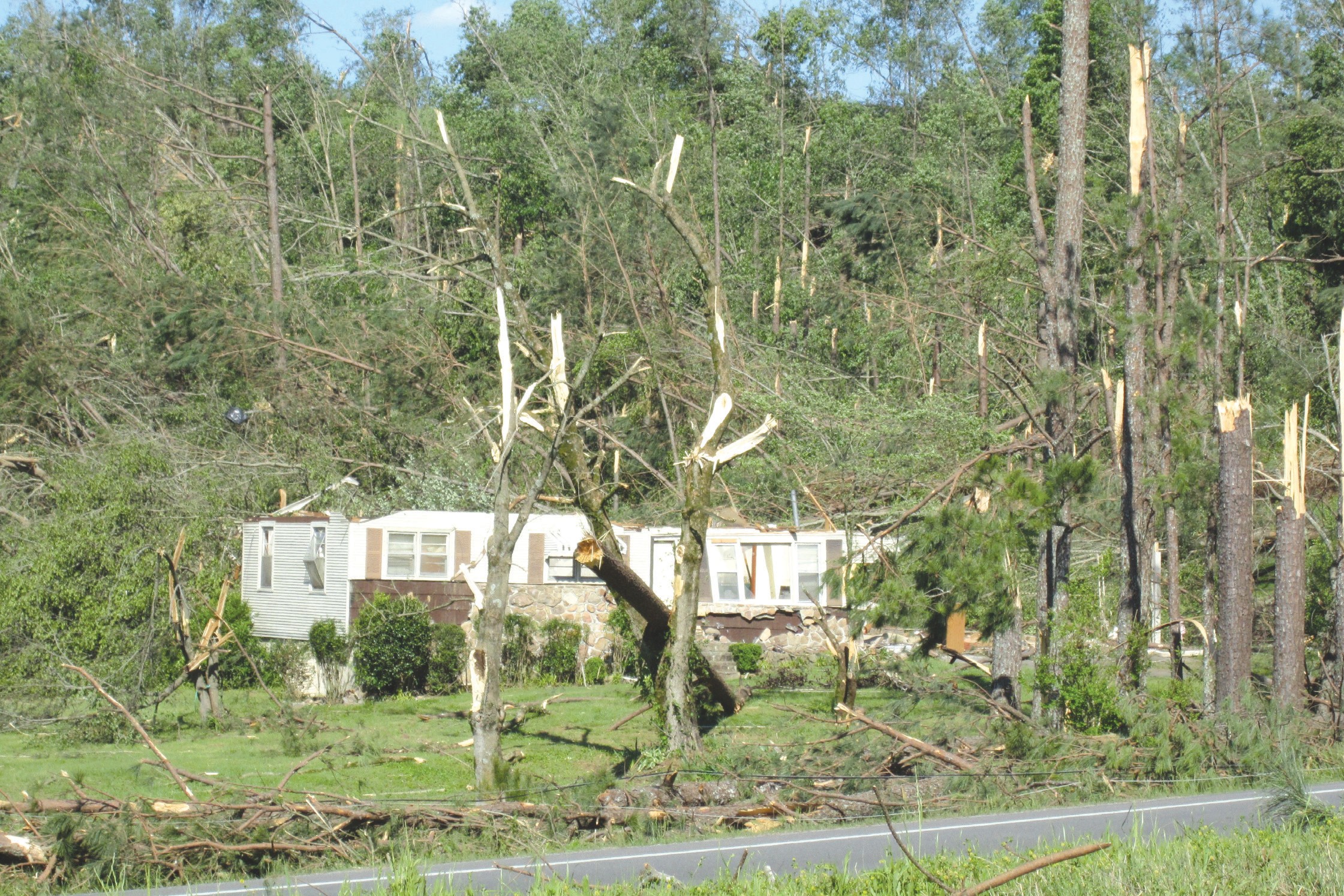 U.S. 278 near Brooksville; Tommy Murphy property was for sale and not occupied at time of storm.

A region-wide killer storm packing high winds and tornados in a twostaged attack last Wednesday left a trail and a number of ragged pockets of destruction through the county, but spared Blount County of fatalities.

The two storms occurred roughly 12 hours apart, with the first damaging homes at Mountain Woods Lake then moving just north of Nectar before exiting the county in a welter of downed trees along its northern reaches around Summit in the early morning hours.

The second and more damaging storm entered Blount County at the Walker County line in the late afternoon around 5 p.m. and churned a half-mile wide, 15-mile long trail of destruction paralleling Mulberry Fork all the way to Blountsville where it reached its climax along Maple Drive before moving on northeast toward the Marshall County line. Property damage but no fatalities 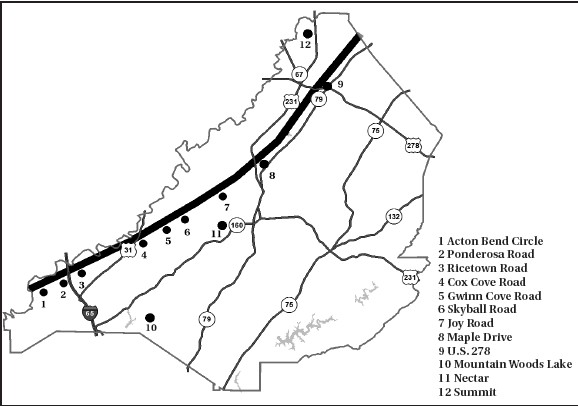 The toll in damaged and destroyed property was terrible, but it could have been worse. No fatalities were reported and fewer than a dozen injuries requiring treatment.

Emergency Management Agency director Max Armstong said his office spent the next three days coordinating relief efforts while surveying the extent of damage around the county. About 60 to 70 homes were destroyed or virtually destroyed, he said. The number substantially damaged approaches 200. No dollar damage estimates are currently available, and may not be for several months, he said.

“We were very fortunate,” Armstrong said. “We suffered less property damage and a lot less human damage than our neighbors in surrounding counties. Of course, if you’re one of the ones whose property was destroyed, then it was a disaster for you.

“To put it in perspective, I haven’t had to draw on resources outside the county to recover. Our people have been able to take care of themselves. That’s compared to the damage in other parts of the state, which I would say is at least equivalent to the damage from a major hurricane,” he said. Harrowing escape

The county’s good overall fortune shouldn’t obscure the fact of harrowing escapes experienced by individuals and families. The Brandon Bullard family is a good example. The Bullards – Brandon, Miranda, and children Landon and Abin – took cover from the storm in a halfbasement beneath their house. The storm blew the house away completely along with the barn nearby. The family survived by clinging to a refrigerator in the basement to avoid being sucked out into the nightmare of the storm. High praise for Blountsville

Armstrong had high praise for the citizens, churches, businesses, and leaders in Blountsville.

“I was really impressed with the way they handled things in Blountsville,” he said. “The people, the churches, Mayor Millwood, and Tyson Foods – they all really came through. Tyson sent a couple of trailer truck loads of food and ice plus a team of people from a church at Lake, Miss. They came in and the churches set up at Blounstsville Methodist Church and cooked and fed people for four or five days – volunteers, work crews, people who didn’t have food and needed to eat.”

Dennis Beavers, a local insurance agent and member of Blountsville Methodist, said churches from the area cooperated to serve an estimated 7000 meals over a four- or five-day period.

“The community really pulled together, and there are a number of things we need to learn from this,” he said. “There are things that you need at a time like this that you need to provide for in advance. Emergency generators, for example. Every church ought to have an emergency generator for when there’s no power. You need to be able to set up and operate when there’s no commercial power.

“Other things we should have available are cardboard boxes, trash bags, and other kinds of storage media. And chainsaw files. You couldn’t buy a chain-saw file around here after the hardware stores sold out of them, and they were desperately needed.”

Beavers also complimented Mayor Randy Millwood on his coordination of the local response to the disaster. Road crews work around clock

County road crews worked around the clock Wednesday and Thursday and by the weekend had most roads passable in the areas worst affected.

“If it weren’t for all the volunteers, these roads wouldn’t be open yet,” said District 2 Commissioner Andy Neill. “Everybody that had a chain saw or front-end loader or tractor was out helping clear downed trees,” he said.

Neill said trees and limbs continued to come down after the storm and that his crews will be helping clear church yards and cemeteries for some time to come.

“I urge people to call and tell us when these limbs and things continue to fall and block the way. We’ll get to it if we know about it.”

District 1 Commissioner Allen Armstrong said his crew worked almost 36 hours straight, with only about two or three hours off early Thursday morning as they struggled to open roads to provide access to citizens and emergency vehicles.

“We were out working when that second storm came through Wednesday afternoon, and we just kept going except letting everybody off a little while early Thursday morning to take a shower and eat a meal. By Thursday afternoon, we had most of our roads where you could get through. Our damage wasn’t concentrated like it was in other places. It was scattered here and there, so we had to break up into teams of two or three guys to try to clear it out,” he said. Power/water/schools/gasoline

Power outages were widespread Wednesday, especially in the northern and western parts of the county, with the majority of outages being cleared by the end of the weekend. The peak number of customers without power occurred Wednesday night with 14,121 outages, according to Alabama Power. As of Tuesday morning, all power was restored in Blount County.

Kelley Cochran, Oneonta manager for Alabama Power, said the power outages were difficult to work because the number of downed trees and debris made the work difficult and time-consuming.

“These storms were particularly damaging to the power infrastructure. In a lot of areas, it was more than just reconnecting lines. Several areas required poles to be completely replaced, and that takes time,” she said.

Power for water utility service was an early concern, but according to Armstrong, no water service failures were reported. All county schools resumed their normal schedule Monday after suspending school for three days last week. Oneonta city schools had operated on a normal schedule all last week except Wednesday, when they went into session after a one-hour delay, then dismissed at 11:30 a.m. for the remainder of the day.

A run on gasoline produced several hours of long lines at gas stations last Wednesday, as citizens from parts of the county affected by power outages were forced to come into Oneonta and points south to buy gasoline.

Gas stations in the Blountsville and Snead areas, as well as points further north, were temporarily unable to pump gas because of the power outage. Gas prices at a number of stations jumped 10 to 15 cents a gallon as a result.

Some citizens complained of price gouging, but increases fell far short of the 25 percent increase required to qualify as price gouging by state law. At least one station, the Shell across from Jack’s in Oneonta, held the price at the pre-storm level of $3.69 per gallon. Cleanup may take months

Armstrong said the county still has a long way to go before debris from the 2011 storm is cleared. He said the job is so big that if county crews were used to clean up storm debris, “we couldn’t do anything else for months, and that wouldn’t be acceptable.”

Armstrong said in this case, for the first time, the county will turn the cleanup over to FEMA itself, which will contract with the Army Corps of Engineers to handle the job. The cleanup could take an extended time, possibly as long as several months, Armstrong said. Using FEMA to monitor the work will save the county man hours of supervision and liability that would be involved if the county contracted the work out privately.

“This gets us out of the position of being a middle man between contractors and FEMA. They’ll handle everything with the Corps of Engineers. Of course we’ll have to pay our portion of the cost, which at this point they’re saying will amount to about 15 percent,” he said.