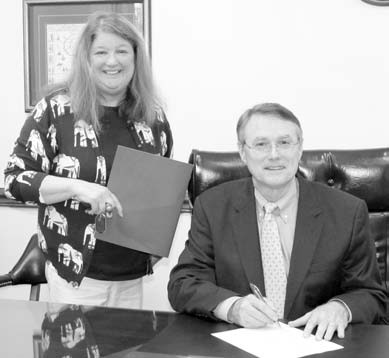 Jane Longshore with the Warrior Rivers DAR, is pictured with probate judge Chris Green as he signs the Constitution Week resolution for Blount County.

In 1955, the National Society Daughters of the American Revolution petitioned Congress with a resolution to declare and commemorate the foundation of the American form of government. Constitution Week was signed into law by President Dwight D. Eisenhower on Aug. 2, 1956. George W. Bush officially declared the inception of Constitution Week in 2002. The local Warrior Rivers DAR chapter continues the commitment to encourage study and educate the public about the Constitution this week, which was adopted by the American Congress of the Confederation on Sept. 17, 1787.