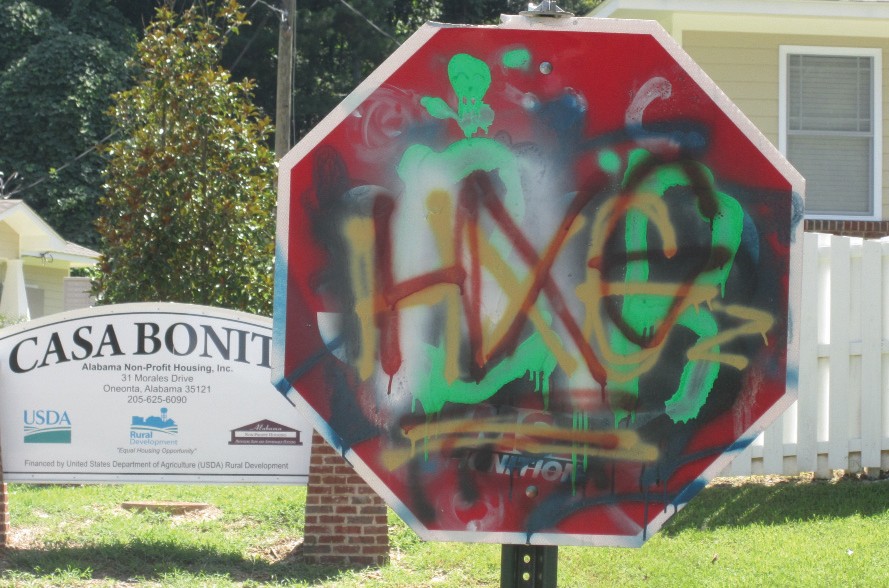 Example of an aggravating problem and unnecessary expense for the county road improvement program: vandalism. It’s widespread throughout the county.

New county engineer Winston Sitton has been on the job a little over a month and immediate job priorities have begun to emerge:

(1) overseeing the completion of the years-long covered bridges renovation project;

(2) helping to administer the county’s identification of roads and application for funding through the Alabama Transportation Rehabilitation and Improvement (ATRIP) program of support for rebuilding Alabama counties’ infrastructure;

(3) dealing with the expensive and aggravating problem of vandalism of county road signs; and, most recently,

(4) responding to the need to upgrade county farm-to-market roads on an urgent basis to avoid loss of federal funding of approximately $500,000 annually, perhaps along with other federal money allotted on a project-by-project basis.

But The Blount Countian’s first question to Sitton wasn’t about priorities. It was to identify main responsibilities of the county engineer’s job for the benefit of newspaper readers. Here’s the list he provided extemporaneously:

•Provide assistance, consultation, and recommendations as appropriate regarding state and federal funding for county roads.

•Inspect all county bridges on a set-interval schedule.

•Serve as point of contact for Alabama Department of Transportation (ALDOT).

•Assist and make engineering recommendations to county commissioners when requested.

The renovation program for the county’s three remaining covered bridges began shortly after they were closed to traffic in June 2009. Delays ensued as specifications were developed, changed, approved and reapproved in several time-consuming iterations with ALDOT, and finally bid for contract repairs. The project is now approaching its scheduled deadline for completion in October this year. Repairs to Easley Bridge proper are complete except for some drainage work remaining on the approaches. Swann Bridge repairs are in progress with decking work completed and roofing work ready to begin or in progress. Work on Horton Mill Bridge will begin within a matter of days. All three bridges must be treated with preservative once repairs are complete, then bridges must pass a final structural inspection before being reopened. All are expected to be open to traffic by the time of the Covered Bridge Festival this year, Sitton said.

The county’s first ATRIP project, a 9.17- mile stretch estimated at almost $2 million and encompassing the full length of county road 27, was approved in June. At least one more call for projects for approval from Alabama counties under the ATRIP program is scheduled for this fall. Other projects may be submitted in subsequent iterations. Sitton said he will be responsible for helping to identify and prepare applications for further projects as counties are invited to submit future projects for state approval.

Vandalism has always been a major cause of the road sign replacement problem in the county, and it’s beginning to assume even larger proportions, Sitton said. For road name signs, the problem is often theft of signs, presumably by youths using them as wall decorations in their rooms or elsewhere. For stop signs and other road information signs, it’s both theft and vandalism, with stop signs sometimes obscured by spray-painted obscenities or graffiti.

According to records dating from October last year when the engineering group took over sign replacement administration (not installation), 47 stop signs and 106 street/road name replacement signs have been ordered in the county. The reorder cost for just those two categories of signs – stop signs and street name signs – is $3,235.

Replacement cost is only a part of the total cost to the county, Sitton said. It also requires time on the part of engineering employees to properly site the signs in the event the entire sign including the post has been removed, the cost of the post, the cost of travel time to and from each location, and the district labor cost of reinstallation. Adding those costs could bring the total replacement cost into the $10,000 range – just for those two categories of signs, Sitton said.

“We need to get the word out to citizens that this is a major unnecessary expense to our road program, and get them to cooperate with us in trying to reduce sign theft and vandalism, “ Sitton said.

Signage can also have an impact on potential loss of federal road funding. One of the categories roads are rated on for federal funding approval purposes is condition of road signage.

“It counts either six or eight points (out of a possible 100) of the total score a road is assigned,” Sitton said. Passing requires a score of 70 or above. If a road’s overall condition places it in the low- to mid- 70s, signage could make the difference between passing and failing.

Continued annual federal road funding is based on an annual scoring procedure for county roads that have been improved at some point with the use of federal money. For the most part, these are farm-to-market roads, mainly those bearing county road number designations. Most are segments of significant length, making repair a costly operation (e.g. the 9+ mile county road 27, which will cost almost $2 million to repave).

Federal funding loss becomes a specter if and when any three of these roads fail to grade out at 70 or more for three consecutive years. Three roads in Blount County meet that criterion and thus the county could face “the death penalty” (not Sitton’s wording) of loss of all federal funding should they fail to score above 70 on the next round of scoring, which will occur perhaps as soon as this fall. It is that reality (among others) that prompted the Blount County Commission to appropriate $1 million from its capital outlay account to apply to upgrading those and other roads as soon as possible.

Fortunately, according to Sitton, the three roads in question scored close enough to 70 that they can be brought up to passing by striping them, and by assuring all signage is in place, properly sited, and not obscured by overpainting by vandals. A perfect score on both striping and signage accounts for a total of 14 points, he said.

We’re starting to work on those roads now and we confidently expect all three to pass in the next round of scoring,” Sitton said.

The three roads in the crosshairs are county road 28 (Airport Road), county road 21(High Mound Baptist Church through McClarty to the Marshall County line), and county road 41 (from U.S. 278 southeast of Snead to the Etowah County line.)