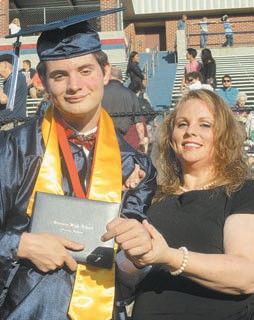 Keaton and his mother, Christy Fallin, celebrate the first day of the rest of his life.

“Keaton Fallin is a miracle, and what he’s been able to do is a miracle. But his mother, Christy, is the hero. Keaton’s blessed to have her. She’s been the driving force that made his recovery possible. Without her, we wouldn’t be where we’re at.”

That summary is from Brent Patterson, special needs teacher at Oneonta High School, himself one of a number who contributed significantly to the miracle. The phrase for Christy Fallin that Patterson didn’t use, but that came through loud and clear in conversation with Christy herself, was “fierce determination.” Fierce determination for Keaton to recover, graduate from high school, and attend college – and to marshal all the resources – medical, educational, emotional, and financial – that were necessary for him to do so. Flashback 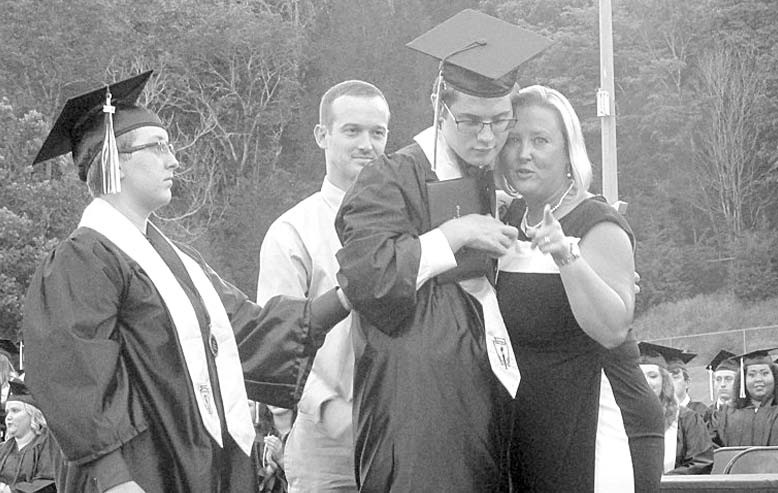 On Sept. 25, 2015, just having entered his junior year in high school, Keaton was in a catastrophic car accident in Remlap. His car went into a ditch, flipped over and crashed into a ravine, leaving him with severe spinal injuries and massive brain damage. He was in a coma for six weeks. Doctors said he would probably not regain consciousness. At two months, he still did not respond to stimulation: touch, sound, or pain. Before the acute period was over, he would have three brain surgeries. Costs of surgery, hospital care, and intensive, comprehensive therapy ran into the millions of dollars, an entire story in itself that will be only hinted at here. Present tense

Yet, last week, Keaton graduated from Oneonta High School with his own senior class, having missed most of his junior year. To do it, he had to make up all his missed classwork between late September, 2015, and when he returned to school in early April, 2016, an absolutely unimaginable task, then continue his senior year at the same pace as his unimpared classmates. It involved the work of a small army of people – physical, occupational, and speech therapists, teachers, aides, and a support network for both him and his mother that stretched into the hundreds. Looking to the future

There’s more. He graduated with more than $45,000 in scholarships: a $30,000 academic scholarship from Jacksonville State, and another $16,000 from the Toby M. Peoples Memorial Scholarship, also through Jacksonville State. That was fourth in total scholarship awards among graduating seniors at Oneonta this year. He will start college in the fall. Jacksonville State, in addition to scholarships, has gone extra miles in providing conditions to enable his success, including a dorm room in the middle of campus specially designed with a view to his needs. An aide arranged by Christy will help manage transport to classes and related requirements.

The path ahead is not an easy one. His impairments, though much improved, are still serious: his speech, while reasonably clear, is slow, on the order of one word every few seconds. But his thinking is sound, and – amazingly – his dry wit and sense of humor are intact. He is still confined to a wheelchair for practical purposes. His 50-foot walk to receive his diploma – assisted by Patterson and Makenzie Bittle, his cousin and mainstay of contemporary support – being his longest at school to date. Prognosis is for continued speech improvement, with therapy. For walking unassisted, the most favorable indication is Christy’s conviction that he ultimately will, with some support, probably a walker, possibly even just a cane.

Again, a summary from Patterson, who has had the responsibility for designing the program to hurdle the academic barriers to Keaton’s success. “Cognitively, his intake and processing of information are fully functioning. It’s mobility, the motor side – movement, writing, walking, speech and possibly, a bit of difficulty with short-term memory, although I’m not at all sure I’ve seen it – that are the problem. Intake is fine. It’s the output, we’ve had to work on. “ Through a glass darkly

What’s the hardest part of coping with the aftermath of the accident? Christy takes that one: “Trying to adjust to the new normal… Trying to work and keep a roof over our heads at the same time (she sold the house they were living in and moved to a smaller place)…Having to fight constantly with assistance agencies, with the impossible amount of paperwork… Having to struggle with everyone, it seemed like, for all the things Keaton needed. I know everybody hated to see me coming because they knew it was going to be something hard they’d have to deal with.”

And the money. Three brain surgeries, a seemingly never-ending program of multiple therapies: physical, occupational, speech. “We couldn’t have made it without this community – friends, acquaintances, friends from school, from work, from the churches, from the community – visiting Keaton at the hospital, checking on me, helping with donations and fund drives – I don’t believe we could have made it anywhere but here, with the constant support of the people here.” Brighter days

This fall Keaton takes up the next chapter in his life at Jacksonville. His major is computer information systems, probably specializing in information security. He was a whiz before the accident. By all accounts, he still is. Carry on, Keaton.