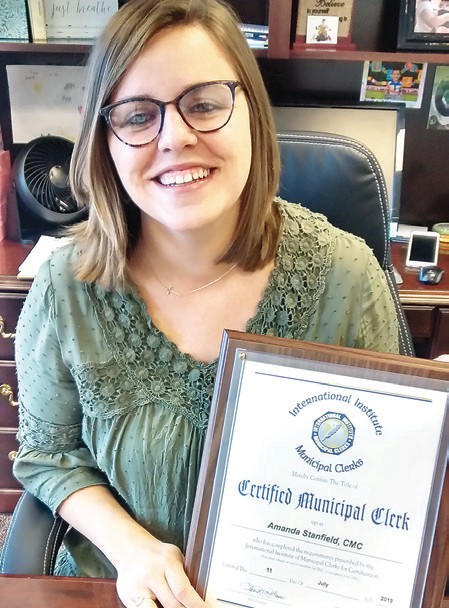 “The first month was very overwhelming, but ‘just breathe’ is my motto,” said Oneonta City Clerk Amanda Stanfield as she pointed to the plaque behind her desk bearing the words.

“I am very thankful and grateful. It’s not easy. There are a lot of different factors and the first month I was very overwhelmed, but now they [co-workers] are like a second family,” adds Stanfield as she proudly displays (at right) a recent certification she received from the International Institute of Municipal Clerks naming her a “Certified Municipal Clerk.”

Stanfield has worked as clerk for the past one and a half years after spending time as assistant to Oneonta City Manager Ed Lowe, and working with Alabama Power and McDonalds.

She has lived in Boaz, Huntsville, Macon, Ga., Center Point, and is presently rebuilding her Oneonta home, which was damaged by the tornado of last March.

Stanfield’s goal was to purse a degree in forensic psychology and crime scene investigation; the birth of a son and other matters derailed that desire.

“I went to Snead State and UAH and got my associate degree in general education, but I realized that going into crime scene investigation would require long hours and being on call and that was not good,” she explained.

While the hours at McDonald’s were long – 65 to 70 per week – Stanfield said she “loved it” because of the fast pace and if everyone worked together the day went “very smooth.”

While there she was offered a job with Alabama Power. Stanfield later learned of the job opening in the city manager’s office and she was one of a large number who applied.

She worked there and when Oneonta’s previous clerk, Tammie Noland retired after 25 years with the city (10 years as city clerk), she was able to move up to that post.

Stanfield said she is thankful she works with a great group of people and has now settled down to the job flow. “They are all like a second family,” she adds.

The IIMC award means a lot to her and she has already applied for her masters training through the international group. She said this includes online and in-person training and lessons. It usually takes four to five years to complete. Stanfield is on an IIMC committee at present as part of her training and records management.