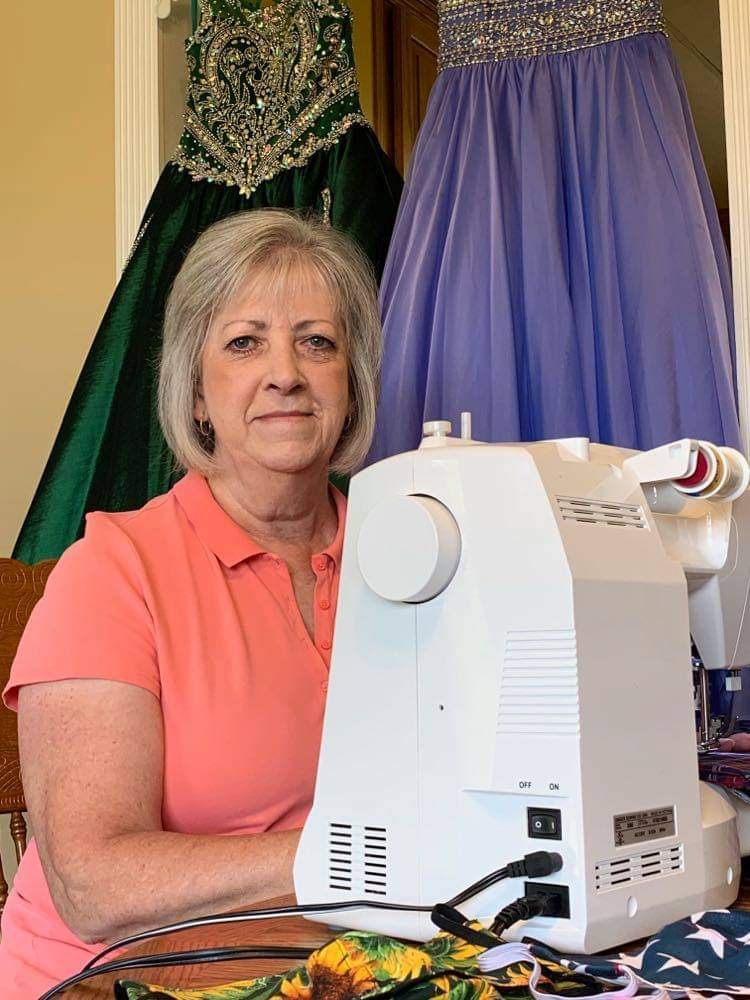 “If I can do one thing to make them feel better, I just do it.”  Joan Moody, this week’s People of Blount County, is just that kind of person.  She enjoys helping others.  Many times she simply sees a need and wants to help.  It is not for praise or money.  She does it because it is the right thing to do and she believes “life is all about helping each other.”

Joan grew up on a farm in Nectar.  She graduated from Cleveland High School “a long time ago,” which was actually 1972.  In addition to schoolwork, Joan had daily chores around the home place.  After all, there were cows, pigs, and chickens that needed tending to, as well as cotton and vegetables that needed to be seen about and cared for on a daily basis.

Although she has many wonderful memories from her childhood, Joan remembers helping when it came time for canning vegetables. She was the one with the smallest hands and her small hands allowed her to easily clean the inside of the jars.  Even though she grew up learning how to can vegetables, it’s not something she wants to do at this point in her life.

Joan also reminisced about always playing in the woods near their home and having fun living on the farm.  Since animals were a big part of her farm life, Joan had a pet pig named “Oinky” that followed her everywhere, including the quarter-mile trek to the bus stop each day.

Each day as Oinky followed along behind Joan, he would squeal — loudly.  His squealing kept the kids on the bus entertained, but it was embarrassing to Joan at the age of 10 or so.  After she got on the bus, Oinky would return home and wait.  Now, it’s a great story to tell. Not many people can say they had a pet pig.

After high school, Joan married Bruce Moody and moved to O-town.  She has remained in Oneonta ever since.  Together, Joan and Bruce raised three daughters and were blessed with four grandchildren.  Bruce passed away from lung cancer “way too early,” she said. That was five years ago.

Joan now encourages anyone who smokes to quit because as a doctor once told her husband, “It’s not if, but when,” a person will get cancer.  She has witnessed first hand the pain and suffering cancer can cause not only to themselves, but to others as well.

If you have ever needed any clothing repaired, garments designed, or costumes made, it’s likely that Joan’s name would have been thrown into the list of names that could do the job.  Her mother taught her to sew with her fingers at age 6.  By 13, Joan had mastered the sewing machine and made an Easter dress and jacket. She has sewn since and made, in her words, “everything imaginable.”  This includes costumes for plays, evening wear, and pageant gowns, as well as wedding dresses.  She says you never know what people want sewn.

The fashion industry now makes these things readily available.  A lot of times it’s actually cheaper to buy an outfit rather than having it handmade.   While she could likely have won many awards for her sewing talents, Joan only entered a few of her pieces in the 4-H contests.

Joan has juggled many hats over the years.  She worked in the lunchroom at Oneonta, was a softball coach, and was the cheerleader sponsor for several years.  She recalled how “amazed” the students were when Joan was an ancient 30 years old and could still do jumps and remember cheerleading routines.

Pageant time was always a busy time for Joan.  Not only was she designing dresses and costumes for the pageant, but for the last 35+ years, Joan could also be found behind the scenes with her pageant partner and close friend Barbara Burns.  Together they worked tirelessly to keep the pageant flowing smoothly at OHS.

Joan has committed to helping again this year, but it will be bittersweet as Mrs. Barbara passed away earlier this year.

One time, when Joan was able to sit in the audience to actually watch the pageant, she was quickly summoned from her seat to the backstage area to repair a malfunction with one of the contestant’s dresses.  Luckily she had her handy dandy sewing kit and was able to make the repair. What most people didn’t know was that she actually had to sew the contestant into the dress.  There was not enough time to properly fix the broken zipper so she had to go with the next best option.

Joan is a member of the Daughters of the American Revolution. Her great-great-grandfather was in the Revolutionary War.  When there was a shortage of masks earlier this year, Joan began making cloth masks for the patients, nurses, and doctors at the VA Hospital.  She never charged for the masks, donating them all as another way to help others in need.

To date, Joan estimates she made at least 2,000 masks.  At one point, she was making masks for anyone who needed them.  Some of her mask creations were made from the same material as ladies wedding/bridesmaid gowns so they would have a matching ensemble on their special day.  Again, it simply goes back to her making whatever anyone needs.

If anyone needs a mask, Joan encourages others to reach out to her via Facebook messenger or by stopping at DD’s Place in Oneonta where she helps out on a weekly basis.  She still has some available and is happy to give them to anyone who needs one.

Eight years ago, Joan was diagnosed with Hodgkin’s Lymphoma.  There was no family history of this cancer, so it was shocking for her to get it.  When diagnosed, the doctor assured her it was curable.  Although she had to have chemo treatments, she never did have to endure radiation treatments.  She is now cancer free.

As mentioned earlier, Joan loves animals.  She currently has one dog and five cats.  All but one of her cats is at least 15 years old.  There have been times when Joan has had as many as 20 felines.

Upon arriving at her home, if an animal has not been spade or neutered, Joan makes an appointment for them to be fixed to help control the animal population.  She laughed and said she mentioned to her vet that she probably owns part, if not all, of the building with all of the money she has invested in her pets over the years.  Joan is convinced people dump animals near her home because they know she will take them in or get them properly cared for.

Now having her days filled with the enjoyment of grandchildren, which includes some virtual learning, Joan has continued on her mission to enjoy life and “not just exist, but to live” despite the barriers she has encountered over the years.

Joan admits her daughters and friends spoil her immensely. She thanks God on a daily basis for her life.  She summed up everything by saying, “Life is all about helping each other.  It is amazing how many people you meet over the years.  It is a joy to check on and help others, especially the older generation.  I want to be an example for my grandkids to learn how important it is to help others.”