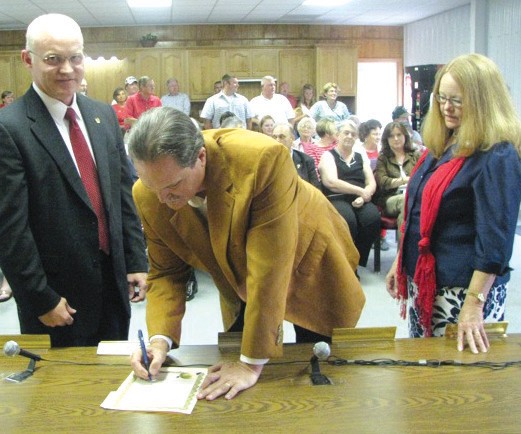 A new chapter of Cleveland politics began last week at the town hall with the swearing in of Jerry Jones as the town’s new mayor. Jones publicly took the oath of office shortly after 6 o’clock Tuesday evening of last week.


Jones won the June 22 election for the mayoral seat vacated by Larry Longshore, who resigned earlier this year. Jones stood before several dozen of the town’s citizens and supporters during a ceremony led by Probate Judge David Standridge.

“First of all, thanks to everyone,” the new mayor said after being sworn in

his family, Jones told the crowd how much his wife, Teresa Jones, had inspired his campaign.

“I am hopeful to see some fruitful events happen in Cleveland. We have a little over two years left, and I’m eager to get some things accomplished,” Jones said.

The 53-year-old mayor is a husband and the father of three children – Christopher Jones, Tony Jones, and Jennifer Martin.

Jones will fill the mayor’s seat until the next election, in August 2012.

Correction from last week – Jones has
previously served as town councilman from
1996 to 2000 but has never been mayor.