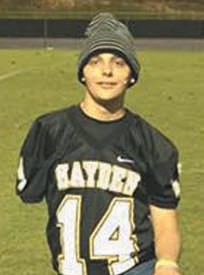 In May of 2015, Jadon Neely realized there was something wrong with his right arm. Jadon, an athlete at Hayden High School, went to the doctor and was shocked to find out he had cancer. The disease was aggressive, and unfortunately, his right arm was removed in August of 2015. By September, the cancer had spread to his lungs.

Jadon died Saturday morning, June 11, 2016. He died peacefully at his home surrounded by the people he loved the most. He was only 16 years old and had just completed 10th grade, but he was such a huge inspiration to everyone who met him. Jadon may be gone, but he will never be forgotten.

“Jadon had a great sense of humor. He was a very courageous young man who was a fighter,” recalled Karron Standridge, his guidance counselor. “Jadon was deeply dedicated to his faith and God. It caused him to be even stronger.”

There are more than 3000 members of the “Pray for Jadon” Facebook page. Jadon was a recipient of the Make-a-Wish Foundation. He and his family were supposed to go to Hawaii near the end of the summer, but because his cancer had gotten more aggressive, they sent Jadon and his family in May. Jadon had the dream of helping his step-father restore a beautiful 1966 blue Mustang with white stripes down the side. Unfortunately, Jadon never got to fulfill that wish, but he was so strong in his faith in the end it didn’t matter.