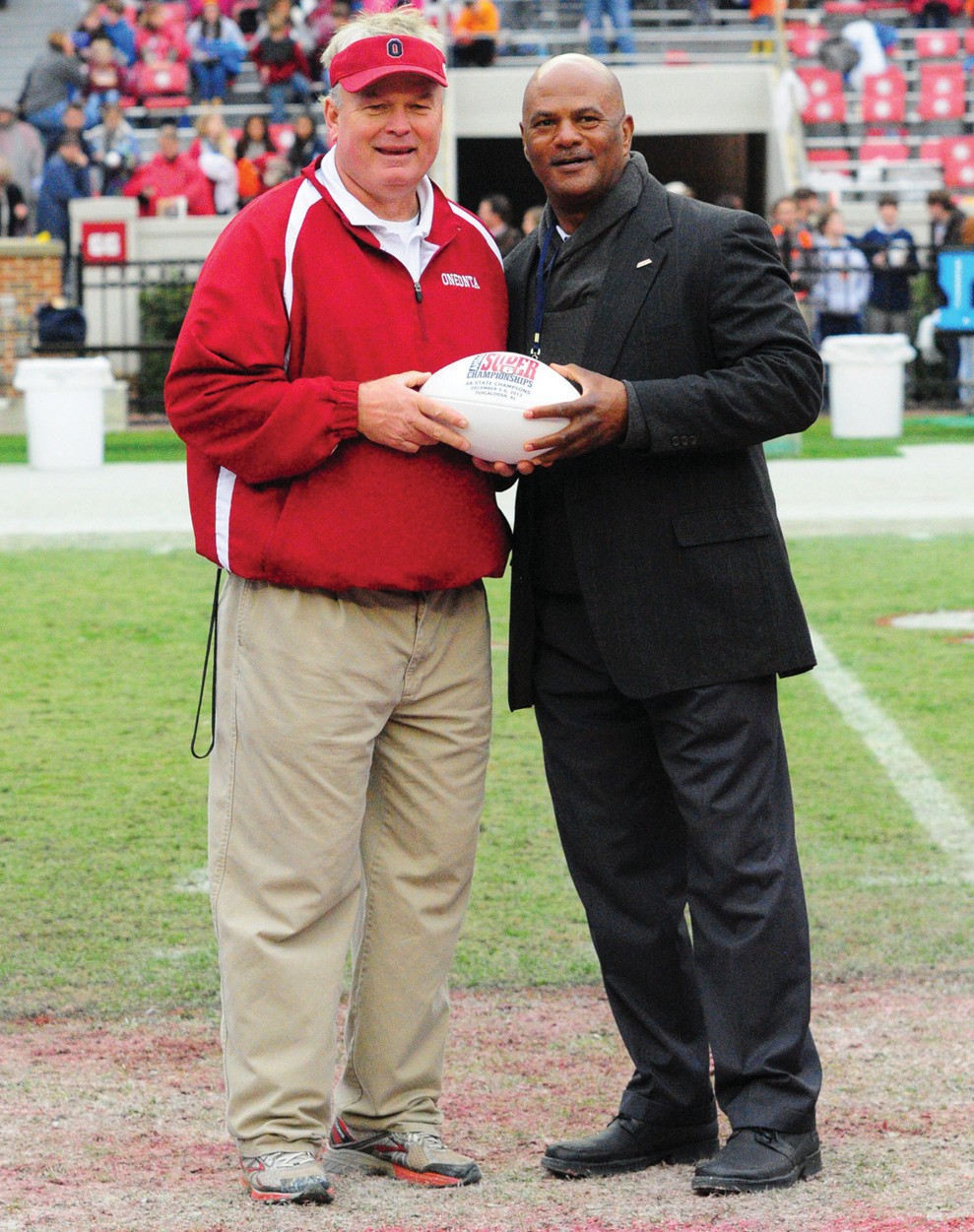 The Oneonta Redskins proved that the third time can in fact be a charm in a dominating 28-10 victory over Charles Henderson in the 4A title game at Bryant-Denny Stadium earlier this month.

After two straight trips – and losses – in the Super Six, the Redskins left no doubt. Charles Henderson rolled into the championship game with a 14-0 record and the Trojans had beaten the best that the south bracket had to offer. Most of those wins were in convincing fashion.

“We had a good week of practice (leading up to the title game),” he said. “Actually, we had an outstanding week except for the walkthrough before the game when we couldn’t do anything right.

“We have a lot of seniors and they had obviously been there before. Leadership is always a key and we had very good leaders on this year’s team.” Different year, different team

Oneonta came into the 2013 season as one of the teams to watch in Class 4A.

The Redskins were the No. 2 team in the preseason poll by the Alabama Sports Writers Association (ASWA) but there were several holes on both sides of the ball.

Oneonta was looking to replace starters at quarterback, running back, and wide receiver on offense and two spots on the offensive line. On defense, the Redskins would debut new starters at defensive tackle, cornerback, linebacker, and safety.

The new starters looked good in fall camp but the team suffered a devastating blow in the fall jamboree when senior wide receiver/ safety Jalen Johnson went down with a season-ending knee injury. The Georgia Tech commitment was on several preseason watch lists and was generally considered to be one of the top 25 players in the state.

“It was tough, real tough,” said Jacobs. “He was so good for us on both sides of the ball and a true team leader. It changed what we wanted to do on both offense and defense and we really only had a couple of days of practice (before the first game with Pinson Valley).”

Oneonta lost that first game to Pinson 25-18, and then squeaked by region foe Guntersville 23-21, the next week.

“We had to make some changes,” said Jacobs. “We moved Brock (Latta) from the defensive line to safety. Normally, you wouldn’t think about a move like that but Brock was athletic enough and he had played a lot of football for us. It took us a little while to settle in.

“Moving him to safety created an opening on the defensive line and it was kind of a domino effect. One move turns into two or three.”

“We knew we were going to be a different team on offense,”said Jacobs. “Alvin Scott had been such a big part of our passing game for three years. He was a threat no matter where we put him or how he touched the ball.”

With the graduation of Scott, and a new starter at quarterback, the Redskin offense was set to rely on Johnson and the running game. However, the injury to Johnson was felt immediately.

“We were going to be young at quarterback but we had Jalen outside to keep the defenses from walking that safety up to force the run. You had to respect a 6’3, 200-pound receiver that could overpower a defensive back or run by a defense. Now, you don’t have that and that means that every wide receiver would be new, as would the quarterback.

“We knew we were going to have to run the ball more (this season) but the loss of Jalen really shifted our focus at the beginning of the year.”

The Redskins’ powerful running game finished the year with 3564 yards on the ground and an average of 5.7 yards per carry. Terrell McDaniel led the Redskins with 1436 yards and 16 touchdowns on 174 carries while Avery Reid added 743 yards and 21 touchdowns on just 86 attempts. Javon Russell had 462 yards on the ground while sophomore quarterback Ko Powell added 453 yards.

“We had to make some changes as far as play calling and emphasis, especially early in the season. As the year went on and we got more reps and a little more healthy, we began to put things together in the passing game.”

So, an Oneonta passing game that started the year with new starters at every position finished the season with more than 2000 yards and 22 touchdowns.

“They ran the ball 72 percent of the time,” said Charles Henderson head coach Mike Dean. “Their running game was big but they also made plays through the air in every film we saw. They were so good up front on both sides of the ball – better than anyone we saw this year. They were tough to match up with physically and their schemes were sound.” Reflection

The 2013 season was a satisfying one for Jacobs. The veteran coach had been in good programs at the college and high school level for years but it had been awhile since he had won a championship.

“I guess the last title I won was in 1979 (when he was a quarterback for Bear Bryant) at Alabama,” he said.

“Now, I had been at Troy (University) and we had some very good teams. We had some success at other places at the college level and in high school but this was the first championship that I was lucky enough to be a part of.”

When asked about the past four years at Oneonta, Jacobs is quick to point out the foundation that was laid that first year.

“We had four seniors on that 2010 team. It’s always tough on seniors when a new coach comes in but I tell you those four – Derrick Bell, Travis Sims, Zac Whited, and Patrick Hubauer – committed to what we were doing and were true leaders. Everybody fed off of them. We did some reorganizing and changed some things in the program but those four were the key.”

The Redskins went 8-4 that season and knocked off Oak Grove 31-21 in the first round of the playoffs. Oneonta went on to lose 34-31 to region champion Anniston in the second round – a game the Redskins led 31-14 in the fourth quarter – but the Redskins finished the year 8-4.

“Everything you do or every journey you take has to start somewhere,” said Jacobs. “We’ve had a lot of success but it started with that team and those four seniors.” Next year?

Oneonta loses a lot of good football players to graduation this year.

“Who knows? Like every other team it will depend on a lot of things, including what the state decides to do.”

The Alabama High School Athletic Association (AHSAA) reclassifies schools every two years. Normally, the classifications and alignments for various sanctioned sports are released in November. However, this year the AHSAA put off the release until Jan. 22.

“It’s hard to say how good we’ll be. I do know that we are going to work hard in the offseason, like we do every year, and we will compete.”