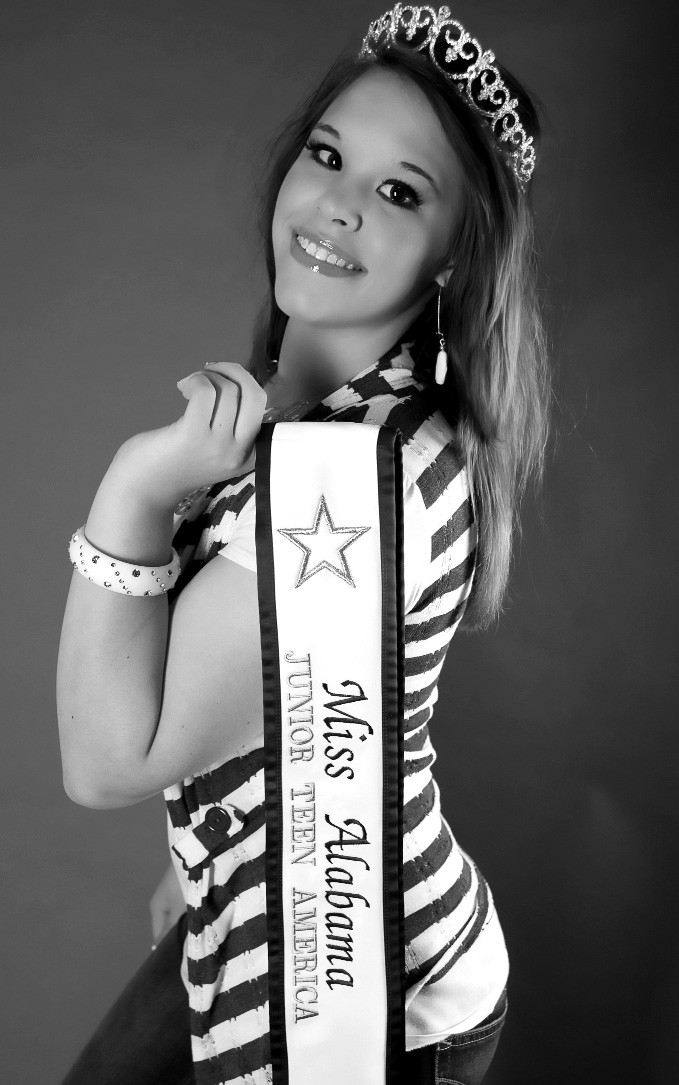 Kimberely Stange, of Blountsville, has been crowned Miss Alabama Junior Teen America 2012. Stange is 14 years old, and in the eighth grade at J.B. Pennington High School. She is the daughter of George and Amanda Stange, and has five sisters and one brother.

This remarkable young lady has quite a list of accomplishments already under her belt. Stange entered her first pageant at the age of 1, and has competed in a total of 20 pageants. In addition to her latest pageant win, she will soon be inducted into the National Honor & Merit Scholars Society, as well as the U.S. Achievement Academy. Her nomination for the U.S. Achievement Academy was made by Dr. Phillip Cleveland, principal of J. B. Pennington. With both of these honors, she is in the running for multiple scholarships, which will be awarded to selected students in 2013. Stange has also been chosen to model clothing items as part of the advertising campaign of Glamorous Again, a new dress shop opening soon in Arab.

As a brown-eyed beauty full of zest for life, Stange has high hopes and dreams for her future. After high school, Stange plans to attend Wallace State Community College, and then transfer to UAB, where she hopes to obtain a degree in physical therapy. She would love to become a physical therapist for a professional team, with an eye on the NBA.

Among a variety of interests and hobbies, Stange enjoys long distance running, reading mystery-fiction, and zombie novels, shopping, playing football and soccer with her siblings, and assisting in cheer squad coaching for Blountsville youth teams.

Between her many activities, she also finds time to do volunteer work for several organizations. Working with the VFW Ladies Auxilary Post 5624 of Snead, she spends time visiting local nursing homes, where she visits with the residents, and helps distribute needed items such as pillows and walker pouches. Stange’s mother and father are both volunteers at the Brooksville Fire Department and she often helps out at the fire station, as well.

Her platform for the Miss Alabama Junior Teen America pageant is “Support Your Citizen Soldier.” Because her father is a military veteran, and currently works in the National Guard, this platform is especially close to her heart.

In conjunction with this cause, Stange has become a social ambassador for the “Hero Boxes” program, which sends care packages to soldiers currently serving overseas, and provides moral support for those soldiers while they are away from home. Her goal as a social ambassador is to raise $5,000 for this cause, which will be used entirely for the purchasing of personal care items to fill each box, and to cover the cost of shipping the boxes to foreign military bases. You can learn more about this cause by visiting her website at www.firstgiving.com/fundraiser/ kimberelystange/herobox.

As Miss Alabama Junior Teen America, Stange will travel to Nashville, Tenn., on April 13, for the final stage of this competition. She will compete against the winners from each of the other states for the national title of Miss Junior Teen America 2012.